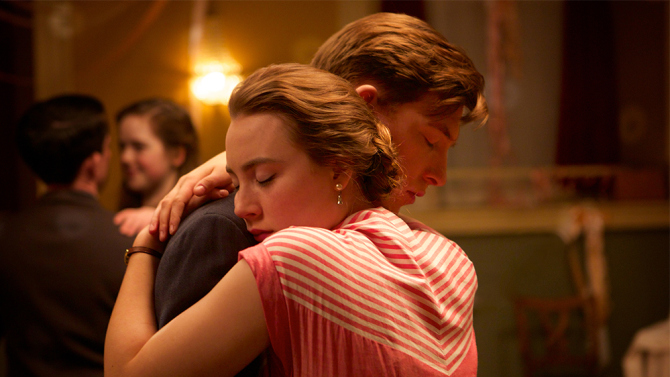 Watching John Crowley’s latest, Brooklyn, is rather like drinking a hot cup of cocoa. It feels wholesome and fresh and warming. It’s like being curled up by the fire on a slightly itchy rug, underneath an age-old woollen blanket.

The film follows Saoirse Ronan’s immigrant Eilis Lacey as she leaves behind Ireland to make a new life for herself state-side in 1950’s Brooklyn: a place, the film repeatedly jokes, that’s full of Irish people anyway. Though it’s Eilis’ first time in Brooklyn, the film beautifully realises that there are aching reminders of home found even in places you barely know. Everybody, it seems, talks about how Brooklyn is an Ireland across the sea: this just makes Eilis’ heart break even more. When she finally finds something worth staying for in Emory Cohen’s Tony, circumstances unfold that call her back to Ireland in a flurry of emotion. Arriving home, she bumps into Domnhall Gleeson’s Jim Farrell: thus the conflict between Eilis’ two homes, and two men, begins.

Brooklyn doesn’t try to reinvent the wheel; while at times it feels like an Irish spin on the Nicholas Sparks novel, it is still effective. This is a film that chooses to be straightforward in its plot and characters and in its costumes and sets. There’s nothing wrong with simplicity – and Crowley and screenwriter Nick Hornby know this. There’s a beauty in Brooklyn‘s simplicity. The film perfectly captures the postwar period, getting to grips with a whole world that’s trying to get back up on its feet. Encapsulated in the character of Ronan’s Eilis is the idea that anything is possible in the new world that has opened up. But these new horizons conflict with the safety of what we know. There’s a bizarre warmth to the freezing waters of the Irish coast, whilst the sunny Brooklyn shoreline is intoxicating, enticing, frighteningly new.

There are no flashy camera tricks on display here, no exciting transitions; Crowley lets the film breathe, adding to its naturalism. Brooklyn is entirely viewed through the lens of Ronan’s Eilis. Ronan is one of those actors who always give their all regardless of the film – and her performance here is no exception. Even when Eilis makes decisions that don’t sit well with the audience you’re carried through by Ronan’s exceptional performance. There’s never a point at which Eilis isn’t a living, breathing person; when Ronan isn’t speaking, Eilis is thinking. It’s a very straightforward performance with a sparkling heart at its centre. While this is absolutely Ronan’s film, her two love interests are very ably tackled by Gleeson and Cohen. One is a charming Italian plumber who cooks spaghetti and the other a well-to-do Irish lad who plays rugby – you choose. Meanwhile the two long-timers in the cast, Julie Walters and Jim Broadbent, turn in exactly the sort of performance you’d expect from the actors who have been given the ‘and’ and the ‘with’ on the film’s poster. In their limited screen time they give nuanced and tender performances. Walters in particular almost steals the show from right under everybody else’s noses in her performance as the matriarchal Irish landlady Eilish, ruling over her fellow émigrés.

If I’m talking a lot about the performances, then that’s because Crowley puts all his faith in his actors. This is a simple fable full of good performances. The sumptuous period sets and costumes are the perfect stage onto which to place these able players. The film feels alive in a very dusty kind of way, like an old photo viewed in the light from an attic window; a photo of someone whose story you heard a long time ago, a distant relative who sailed across the sea. Like all the family stories you shared with your Grandma over a mug of cocoa, it is sometimes a little embellished, a tad melodramatic and a wee bit stuffy – but it’s all the better for it. You know that you’ve heard it before and you still want to hear it again, particularly when it’s told like this.

Brooklyn had its UK premiere at the London Film Festival. It is released in cinemas nationwide on 26th November.