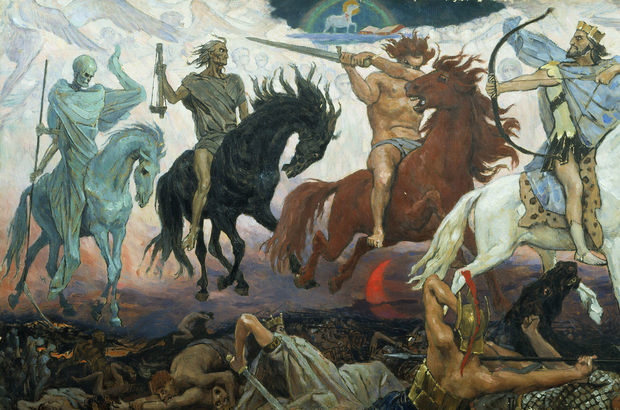 IMOGEN GODDARD explores the role of literature in examining and predicting climate change.

There is an ever-growing focus on humanity’s impact on the environment— and rightly so, given the alarming rate at which climate change is escalating. However, this fascination with our world’s future is by no means a new phenomenon and has been explored in literature for centuries from Biblical and Medieval writing, to modern science-fiction. This latter genre in particular has become the perfect means to examine what could potentially occur if human damage to the environment continues at its current rate. Such fiction often comes to horrifying conclusions. Perhaps it is about time that we start listening to what it has to say.

Works exploring humanity’s fear of the apocalypse were common in Medieval and Renaissance writings, with contemporary warnings of terror and of the end of time often finding precursors in the Old Testament. While applying the idea of climate change to these texts would be anachronistic, they show that a fear of the future is a natural human instinct. The difference with the present day, of course, is that our understanding of the future is that it is suddenly within human control, rather than divinely pre-ordained.

The specific issue of global warming has been on writers’ minds since the crisis was identified in the twentieth century. In J.G. Ballad’s 1962 novel The Drowned World, the Northern hemisphere is depicted as being flooded by melted polar ice caps, a threat which is now particularly imminent. Ballard’s novel shows that even fifty years ago, fears around the threats of climate change was beginning to surface – threats which are now very real and immediate.

There are several other notable works of this genre that do not explicitly focus on the environment, but other crises facing the contemporary world. In Orson Scott Card’s 1985 novel Ender’s Game and subsequent sequels, interplanetary exploration and inhabitation resolves the issue of overpopulation on Earth, a concern that grows yearly with rapid global population increase. Indeed since Card’s novel was published, the world population has grown from 4.9 to 7.6 billion. Margaret Atwood’s The Handmaid’s Tale of the same year explores a world in which an epidemic of infertility threatens the stability and future of humankind, a future which, again, has been brought about by human means and a lack of foresight. Atwood’s novel and its television adaptation have been praised for bearing terrifying similarities to our current world; we could easily believe that the horrifying Republic of Gilead could become a reality several years down the line.

However, the literary genres of science-fiction and dystopia are not taken very seriously as mediums through which we can examine climate change. We tend to focus on the sensationalism of sci-fi, on what is exciting and unbelievable, rather than what is factually accurate. This is partly the fault of the genre itself: its novels do not tend to be written as polemical works that seek to incite people to political action, and authors naturally elaborate and embellish fact to engage the audience. Nevertheless, works of this genre are always based on something that could potentially occur, and thus we could easily treat them as more legitimate than is commonly believed (while acknowledging their fictionality).

Evidently the terrifying potential developments of our future have intrigued writers for many years, and will certainly continue to be a key source of inspiration for the science-fiction and dystopian literary genres. As we have seen in The Drowned World and The Handmaid’s Tale, such nightmarish futures are definitely believable, especially given the more recent increasing rate of climate change. Interestingly, these two specific novels were published in the 20th century, though it is only now that they seem to be becoming vital wakeup calls. Despite their basis in fiction, the way these kinds of novels explore our greatest concerns regarding the unknown future is in fact potentially prophetic.