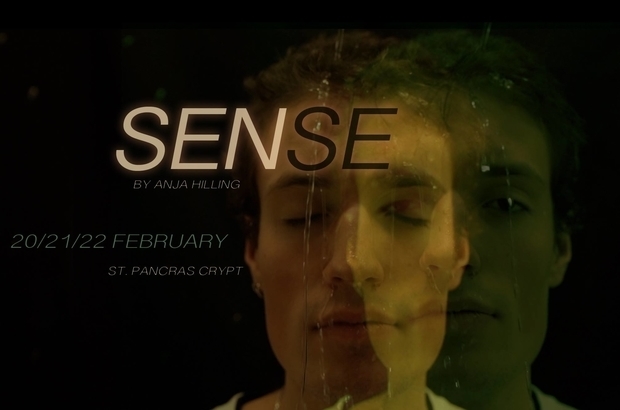 A small huddle of about 20 people stand outside the large, ornate doors to the St Pancras Church Crypt. It’s dark, cold and quiet on this Thursday evening, the hum of audience chatting to each quietens down as the doors open. We’re swept in, down the stairs and underground into the world of Anja Hilling’s SENSE. SENSE explores what it means to be a teenager – the complex relationships, intense passions and conflicting emotion. There are five scenes, one for each sense – sight, smell, touch, sound and taste – each a duologue. Directors Amy Reade, George Jibson and Cara Michel restructured the play, presenting each scene in a separate chamber of the crypt, as its own performance art installation. It was the inventive way that the whole production was performed and designed that really shaped the audience’s reaction to the piece and relationship to the characters.

The second scene, ‘Nose’ was particularly powerful in this regard. Entering the small blue alcove, there is a wave of warmth bringing with it a cosy and intimate atmosphere as well as the velvety smell of jasmine incense. Flour covers the whole room, like fresh snowfall, its particles dancing in the light creating a warm haze. Best friends Karl and Tommi (Alberto Lais and Pablo Temboury) sit on the floor in clean white linen frozen, legs intertwined. The scene plays out Karl and Tommi’s childhood friendship as it violently collapses in conflict over a girl they’re both in love with. The body of their shared love interest, Jasmine, is exquisitely depicted as large lump of pliable bread dough – it’s caressed, kissed, touched and stretched; then subsequently punched and ripped at as passion turns anger. The intensity of the sexual encounters both boys experience is simply demonstrated by giving life to dough. The white paradise of the picturesque bakery ends abruptly with the murder of Tommi. A slit to the throat, a guttural cry from Temboury and a disturbingly strong stream of blood in the form of tomato passata. The white clothes are left stained, the strong smell of tomato diffusing into the audience. The formerly pure friendship is stained by the blood of violent passion. It was impossible not to be swept away into the world of the German bakery.

The ‘Tongue’ duologue is reworked from the original script into a monologue, performed by Ema Cavolli. It is set out like a cooking demonstration with the audience sat on benches before her table, the countertop covered in a plethora of colourful vegetables. She gives a clear and comical delivery of her story, one about the painful end of a short-lived relationship, playing both characters Beate and Laurent. While it would appear tricky to portray the sense ‘taste’ without force-feeding the audience, this barrier is tackled effectively and, yet again, creatively. A large red tomato is bitten into when the two characters would have kissed, a symbol reminiscent of the passionate bloodshed of the ‘Nose’ scene. Towards the end Cavolli throws chopped onions into a pan; as Beate and Laurent’s argument intensifies, so does the smell of cooking onions, and then of burning. With this ingenious device Cavolli’s eyes fill with tears as the characters’ relationship and the onions burn to a crisp.

Just as in ‘Tongue’ the audience is overwhelmed by smell, in ‘Ears’ Martha Christodoulou and Ari Rajaonesy playfully weave their lines over one another bathing the audience in sound. Setting the scene in a pitch black tunnel effectively makes the performance a purely audible experience, and cleverly multilingual: lines begin in English then run off into Greek, French and German, playing on the different tonal qualities each language offered. However, as the fast-paced scene progresses, the combination of word-play, language mixing and dialogue overlaps becomes too much. Establishing what has actually occurred is near impossible. The scene is chaotic, something that captures the overwhelming nature of adolescence, but to the point of excess. While the concept of experimenting with different languages is an ingenious way to use the actor’s talents, it is overused, leading to general confusion rather than intrigue and a sense of detachment from the characters and their stories.

Similarly in the ‘Eyes’ scene, about Fred, a blind boy played by Luke Griffiths, the experimental style is prioritised at the sacrifice of the fluidity of the performance. The scene is set in a large box created by mirrored fabric, with the audience stood outside, peering in through peep holes for the entire scene. The white lights’ reflection is incredibly bright, almost painful on the eyes. A consequence of the innovative staging however is the spatially limited performance. The box where the actors stand is roughly three meters squared and the dance-like choreography feels limited by the lack of space. The quirky set design here is conceptually great but there is a lack of cohesion between it and the actors.

SENSE, as promised, is a feast for the senses. Isolating the scenes to different crypt rooms along with inventive set design and prop use really distinguishes each scene and each sense from the other. The scenes are disparate and overall individually incredibly engaging. The piece as a whole lacks cohesion and the narrative is often lost in within the whirlwind scenes themselves and the play as a whole. Overall, however, an impressive piece; a fresh and adventurous take on Anja Hilling’s script.