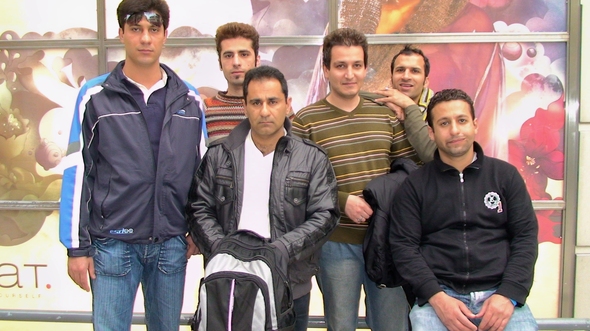 With a home video feel, the personal emotional investment in Stopover from its director, Bakhtiari, is evident.

Bakhtiari’s cousin, Mohsen is an illegal Iranian immigrant who is ‘stopping over’ in Greece. He is one of seven Iranian men and one Argentinean woman are the residents of a singular basement flat, affectionately known as ‘Amir’s boarding house’. When Bakhtiari arrives in Greece, Mohsen has just been released from prison, again, having been caught at an airport. Shockingly, he will be arrested and released once more during the course of the documentary.

Entirely viewed from Bakhtiari’s viewpoint, the audience never sees the director’s face but rather assumes his role among the Iranian Immigrants whose struggle in Greece he is documenting. Born in Iran, Bakhtiari’s position is unique, he is both removed and involved in the immigrants’ struggle, a situation that seems grafted onto his viewers through the stylised and personal camera angles.

The fridge in Amir’s boarding house is always empty; there is no food, except for eggs. Somebody laughs, we eat a lot of those! This is a recurring theme. Like a family, the men bicker. However, although they may act like a family, especially because of their need for interdependence, it is clear that this house is not their home. There is no privacy; trapped by their situation, shut out by curtains on the windows and encased in quiet anger and pessimism.

Stopover’s subjects have had multiple encounters with abominable human rights standards and are consistently treated like scum; because of this, they are deeply philosophical when talking to the camera, when talking to us. Why is one man different from another? Why are they treated like criminals instead of victims? Where is God? From the other side of the screen, sitting comfortably, we have no answers.

The name Stopover is an honest description of Greece for some of the immigrants, who succeed in reaching their further destinations. However, for others, that reality is just a dream. What was just meant to be a ‘stopover’ is becoming an awful way of life.

Stopover is neither cinematic or action packed. It is a documentary that shows slow suffering, day and night, of men who have been born into situations that push them to the extremes, for years on end. Bakhtiari’s look at the lives of illegal immigrants allows his western audience to further try to imagine and understand them; too often are we affronted with statistics and told of the hindrance of faceless immigrants. Bakhtiari challenges these regressive stereotypes in a deeply personal and emotive film, reaching out to the hearts of his helpless viewers.

Shockingly, the difference between success and death is too often just luck.

To book tickets for DocHouse’s screening of Stopover followed by a Panal Discussion: http://www.dochouse.org/film-screening/Stop-Over–Panel-Discussion/378