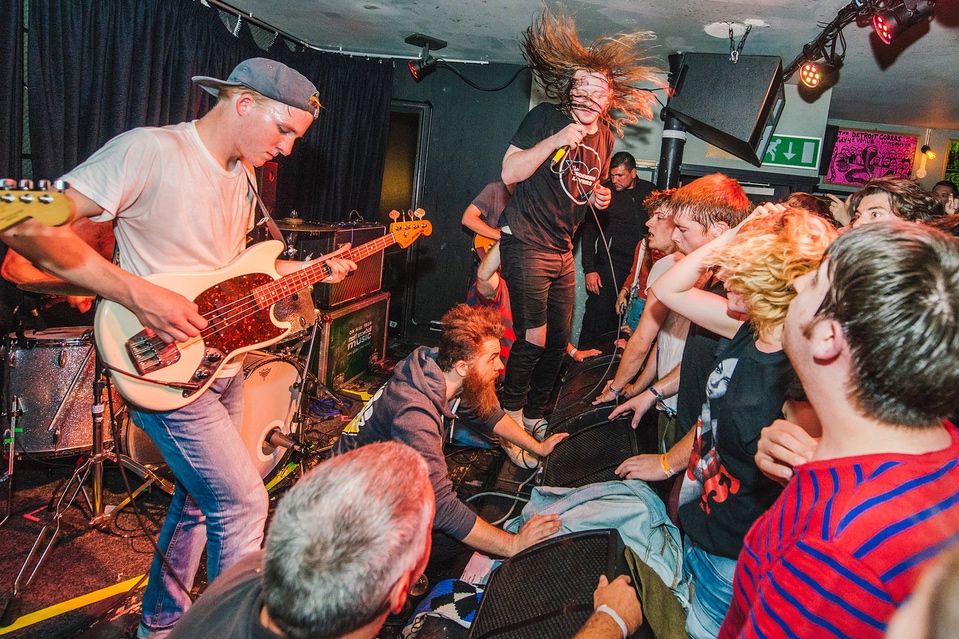 JAMES PATRICK CASEY reviews The Orwells at the Electric Ballroom, a band that outplayed their less impressive albums onstage.

I’m not a fan of Chicago punk quintet The Orwells; their albums, despite positive reviews, are musically slow and lyrically uninspiring – Southern Comfort’s ‘eyes on the prize, eyes on her thighs’ is a particular lowlight – however, the group’s live performance was a thing of incoherent and messy beauty, and shows that you don’t have to be serious all the time to enjoy punk.

I found myself comparing the show to Rise Against’s performance that I reviewed last week, and The Orwells’ show was a decidedly more chaotic affair, with singer Mario Cuomo crowdsurfing into the middle of a mosh pit to start their set. And while the moshing was less structured than I usually like – instead of defined ‘pits’ full of sudden bursts of energy coinciding with choruses and solos, there were 90 consecutive minutes of being thrust forward and backward as one mass of gender-diverse bodies that have left me technically bisexual – it was still a bloody good time.

The band were also amusingly incoherent, with Mario taping up his mouth for one song and climbing onto a speaker for another instead of actually singing through it. It almost became ridiculous when the crowd started singing along to riffs rather than lyrics, but that was just the kind of evening it was; most people were drunk, all were enjoying themselves, and I managed to mosh without losing a shoe or an eye. The crowd, however, were the real stars of the evening, moshing in the gaps between songs, and displaying a comradeship impressive among punks, in breaking your ribs in pits, but picking you up if you fall.

But the evening wasn’t perfect: the opening bands, Golding and Kid Wave, were frankly awful. Half of the former’s members appeared to have modelled their hairstyles on public hair, and their guitarist bared an eery resemblance to part-time comet scientist and full-time provocative shirt-wearer Dr Matt Taylor. Equally, Kid Wave’s guitarist pulled off the impressive feat of looking like all three members of Australian band Wolfmother at once, but both groups’ overly long choruses and bridges sucked any fun out of their songs, which probably sounded melodic on the albums but isn’t really appropriate when you’re performing to people who’ll literally mosh to nothing but the sound of themselves moshing.

Perhaps that made the headliners even better; The Orwells elbowed us in the face with an aggression and a messy brilliance you don’t really get from listening to their albums, and turned the Electric Ballroom, a venue that resembles the IKEA version of a rock venue complete with flat wooden flooring and monolithic black walls of sensible Swedish design, into a claustrophobic pit where life is little more than reckless fun, to be enjoyed simply for the hell of it – ‘You better burn that flag, ‘cause it ain’t against the law’.