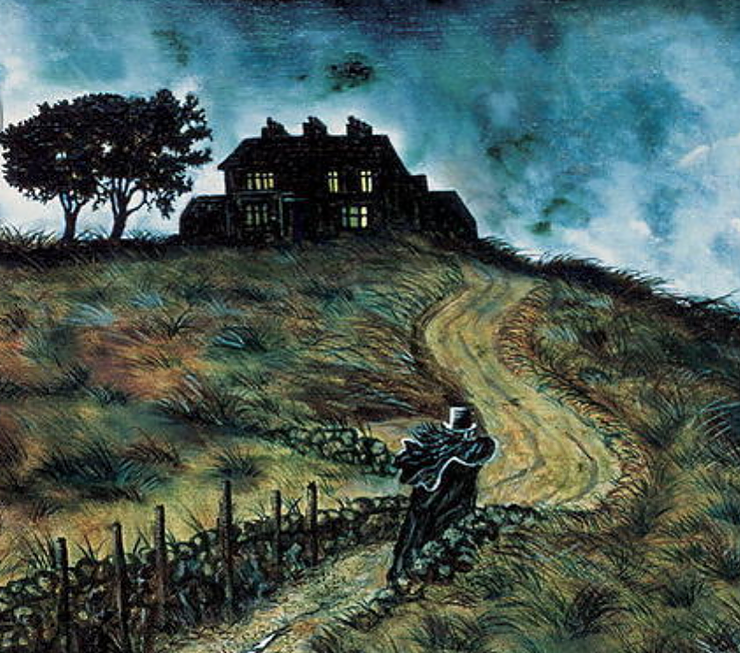 Having initially read it when I was 13, I recently revisited Emily Brontë’s

much-loved Wuthering Heights. At a time where I was attempting to get my head around Joyce’s intricate and maddening Ulysses, I was looking forward to the comfort of a classic, welcoming what I had perceived to be a tragically romantic love story set upon the wild Yorkshire moors. I was disappointed. My 13-year-old self had, perhaps mercifully, not grasped the violence of Wuthering Heights’ narrative or the abusive nature of the relationships.

So many novels offer a brooding, severe and unsuspecting male love interest; it’s what we love and expect. Take Austen’s Mr Darcy, who initially seems rude and arrogant but ultimately provides the perfect foil for boisterous Lizzie. Or the hero of the recent Netflix sensation Bridgerton, Simon Hastings, whose superiority and indifference softens and seduces the ‘diamond’ of the ton, Daphne. Over the years, Heathcliff has come to be classified in the same category. Frequently taken as a Byronic hero, his childhood traumas have somehow excused his abusive behaviour. But for me, no reinterpretation or adaptation can redefine Heathcliff’s necrophilic digging up of Cathy’s corpse as romantic; it is undeniably disturbing. Perhaps we should portion some blame to Brontë for giving us the archetypal ‘bad boy’, which has come to saturate television and film. When Pride and Prejudice was translated into Helen Fielding’s 1996 romantic comedy Bridget Jones’ Diary, Richard Curtis’ film adaptation saw Hugh Grant selected for the role of Daniel Cleaver, a modern day George Wickham. Grant’s cheeky and charming performance reveals the attraction of a bad boy. And yet Heathcliff is not merely arrogant and selfish like Cleaver. In fact, he is far more dangerous than any Austen anti-hero – and so why is he so celebrated and romanticised?

Re-reading the novel at the age of 21, I noticed the ill treatment and immorality I overlooked or forgave for the sake of tragic love the first time round. Now, it seems to me that the real heartbreak of the story is that of Isabella, Heathcliff’s unloved wife, who was emphatically second-best and exploited as a vehicle for revenge. Their marriage is an abhorrent cycle of verbal and psychological abuse; he throws a knife at her, hangs her dog and refuses to allow her to leave, holding her against her will. Heathcliff claims to be keeping ‘strictly within the limits of the law’ as he endeavours to prevent her from obtaining ‘the slightest right to claim a separation,’ implicitly admitting that the only reason he has not physically harmed her is that this would grant her grounds for divorce. A 21st-century reader can identify how Isabella is controlled, gaslit and manipulated by her devious husband:

No, you’re not fit to be your own guardian, Isabella, now; and I, being your legal protector, must retain you in my custody, however distasteful the obligation may be – Go upstairs.

Heathcliff isolates Isabella from her family (particularly her brother, Edgar) and humiliates her in front of friends, leaving her a mere shell of a woman:

Her pretty face was wan and listless; her hair uncurled, some locks hanging lankly down, and some carelessly twisted round her head. Probably she had not touched her dress since yester evening.

Her confidence and appearance is undermined, her sanity questioned. Her ‘wan and listless’ demeanour would surely indicate a sufferance of some kind. Unequivocally then, Heathcliff is a villain and not a romantic hero. I think many of us can relate to Isabella’s initial naivety by being swept along by his tragic, brooding facade. The warning bells ring from the beginning as we bear witness to Heathcliff’s cruel belittling of Isabella and ultimate revenge marriage.

How did Brontë construct such a monster? Did she intend for Wuthering Heights to be construed as a romantic tale with Cathy and Heathcliff as tragic lovers? I think the romanticisation of Heathcliff has more likely developed from various film adaptations, some of which have blatantly softened the cruelty of the characters and romanticised the harshness of the moors. Often, they omit considerable sections of the second half of the novel which expose Heathcliff’s very real and very tangible rage and savagery. Heathcliff has been portrayed by the likes of Laurence Olivier (1939), Ralph Fiennes (1992) and Cliff Richard (1996), all of whom offer a rather dashing interpretation of this Victorian rogue despite the fact that he is not depicted as conventionally attractive by Brontë. Writing for the Guardian, Martin Kettle once said, ‘If Wuthering Heights is a love story, then Hamlet is a family sitcom.’

I will always love a classic, and admittedly have a soft spot for romance, yet re-reading Wuthering Heights forced me to reconsider my opinion on this canonical Victorian text. If you think you’re going to get a Romeo and Juliet-esque love story, think again. We do not receive an equivalent to Mr Darcy’s heart-breaking declaration of love, the passionate love triangles in Alcott’s Little Women, or the tragic flashbacks which reveal Jay and Daisy Buchanan’s thwarted romance in The Great Gatsby. The all-consuming love of Heathcliff and Cathy is like a bomb, destroying all those in its path.

What then, is the true lesson of Wuthering Heights? Some believe Brontë to have been a spinster, although her 1845 poem Remembrance implies she was once in love. Either way, it is unlikely that Brontë  intended her novel to be a kind of 19th-century dating guide. If we are to take only one thing from Wuthering Heights, it is surely what a love story should not be.