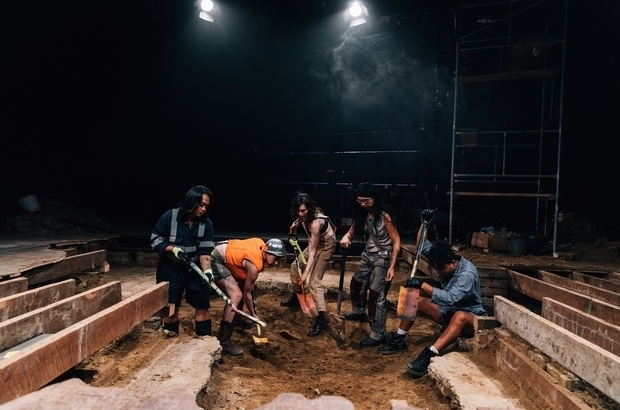 JAMIE COTTLE reviews Emma Frankland’s We Dig at the Ovalhouse.

Before entering the Ovalhouse theatre, I was unsure of how much digging these four transfemme performers would actually be doing. Of course, the title should really have been a clue. The play was, after all, part of the Ovalhouse’s demolition series, that invited artists to get a head start on the upcoming destruction and renovation of the famous playhouse. This production, created by Emma Frankland and with movement direction by Nando Messias, invites a changing international company of transfemmes to explore the persistent survival of transness throughout time. It does this through dance, comedy, conversation, grand symbolic gesture and, crucially, a lot of demolition. Yet, still this physical act of digging seems improbable to me upon entry, partially because theatre simply doesn’t do this, it doesn’t destroy itself, which gives the performance a poignant sense of rarity and singularity. But I also felt cautious because trans people don’t do this. It is very rare that we are given permission to get this messy, or at least for an audience. This is where the play thrives: in its moments of mess and pure kinetic energy. Every muscle tensed is real, every back ache and bead of sweat is palpable for the audience from behind the safety goggles we are occasionally instructed to put on as sparks and concrete and fire fly through the air.

The text too thrives when it appears conversational and unrehearsed; there is something so tender about four trans people discussing their achievable dreams like four friends at a very socially progressive construction site. In this play the performers are simply allowed to exist on stage and this is enough. Too often in trans theatre there is barrier of explanation between the audience and the performer, they are forced to educate us before we can see their hearts. ‘We Dig’ takes no such precaution and rightfully so. It is a play for trans people inviting us to dig deep into the soil of our ancestry; to question why the relics of our transness have been lost or destroyed; and importantly to think of our future and what we will leave behind.

It must be noted that from this ethos of mess and unpolished heart also come moments of silence, leaving the audience temporarily uncomfortable as to what would happen next or questioning if all was going to plan. Thus, the performance does require a bit of fine tuning, but without losing that rawness and spontaneity that defines the piece.

‘We Dig’ certainly makes up for this however in its spirit and energy most concentrated in the commanding performance of Emma Frankland (creator and performer), who steers the team often from behind a working jackhammer as she drills into the subject matter. Travis Alabanza’s skill and endurance must also be mentioned as they move from spade pole-dancing, to digging deep into the ground of the Ovalhouse, before spending the rest of play using multiple glass jars to collect a never ending drip from the ceiling. This all culminates in a rousing speech using the drip as metaphor for how trans people are forced to juggle so many anxieties at the hands of society. Morgan M. Page’s rawness as she tugs at the earth in search of ancestry is beautiful to watch, whilst Tamarra’s vulnerability in describing the emotional torment of trans life in Indonesia feels urgent and touching, but is performed a little too quietly for coherence at times. Gein Wong has moments of poetic brilliance yet they seemed to have less energy as the play progressed. The play also invites a new guest star each night to perform a speech adding to the feeling of a rarity whilst extending the plays platform to other trans voices in theatre.

Overall ‘We Dig’ will command your attention and force you to face the significance of transfemmes in history with a visceral energy. It does so in a unique format of destruction that I, for one, am very glad I got to see before health and safety takes over and something like this is never allowed onstage again.