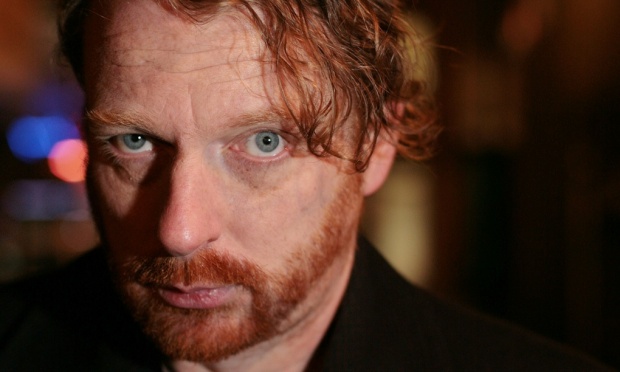 The redeeming features of Kim Noble’s ‘You’re Not Alone’ are few and far between. The adjectives at my disposal to describe the show are reminiscent of those used to tenderly describe an intolerable, wayward child: interesting, peculiar, troubled.

To voluntarily pay for a ticket that requires you be locked in a dark theatre studio with the naked Noble for an hour, ‘You’re Not Alone’ audience members have to have taken either one of two routes. The first is that they intended to embrace the steady and intertwined digital flow of ejaculating cocks, taxidermy and a terminally ill man for the sake of ‘art’. The second is that they made a horrible, horrible mistake, realised only when the theatre doors have shut fast and the guy on stage doesn’t look anything like Kim Novak.

For the latter, I sympathise. ‘You’re Not Alone’ burns itself on the innards of the mind, once seen it cannot be unseen.

However, the show does address some important life questions. Are we essentially all alone, a prerequisite of human individuality? Are we then not alone in our collective and similar loneliness? If somebody says they work at B&Q, can you definitely trust them?

On entering the theatre my friend Sophie and I are ushered by Noble to the front row, and assigned seats. This is special treatment. Midway through the performance Sophie is asked if she likes chicken – one should note that earlier in the show Noble makes a photograph of two chicken breasts look like a close-up vagina shot, with surprising success and the help of his own shorn pubes. Sophie says, yes – she does like chicken… um… vagina chicken? She is then whisked away on an electric scooter with the pretence of being taken to Nando’s, hurrah.

I am left alone – is this the point?

Unguarded by my friend Noble draws me up and holds my hand. He is sweaty. He tells me that his Dad is going to die soon. I then slow dance with a girl I have never met. It is the end of the show and people begin to leave. Keeping to orders I continue to sway for what feels like a very long time. The girl and I part without a word. I’m wondering if Sophie has been kidnapped.

She hasn’t. We are, however, actually invited to Nando’s. 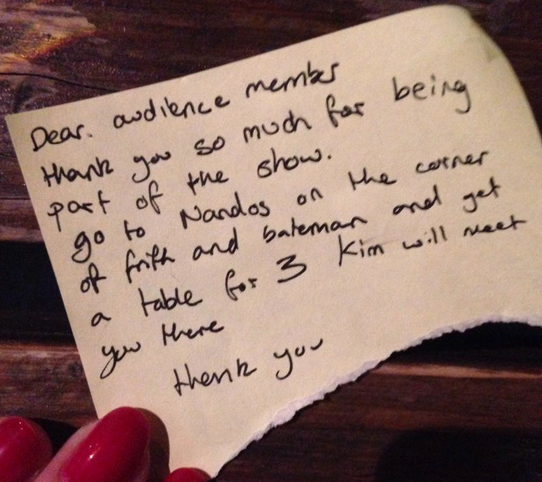 Emotionally exhausted and with a still lingering chicken-vagina in mind, we sadly did not attend.

Categorically the weirdest show I have ever seen. Go, if you dare.

‘Kim Noble: You’re Not Alone’ is showing at Soho Theatre until 7 March. For more information and tickets click HERE