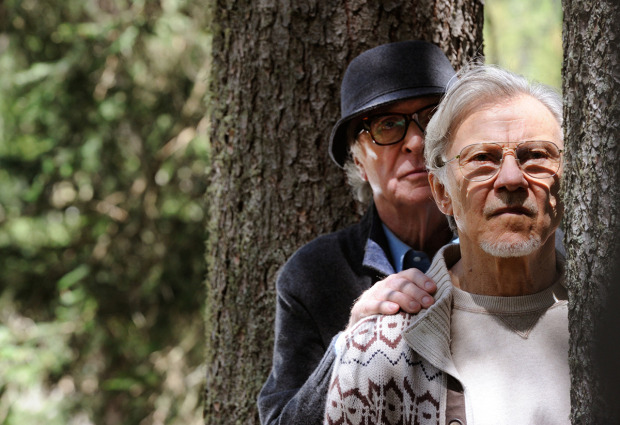 Youth involves contemplation, inspiration and resignation. It stars Michael Caine and Harvey Keitel as septuagenarian friends on vacation in the Swiss Alps, contemplating past and present, love and loss. Paulo Sorrentino directs with typical flair, beautifully framing their meditative conversations.

Keitel’s Mike, a filmmaker, and Caine’s Fred, a retired composer, seek to rediscover beauty, human or natural: the kind of beauty represented by Youth’s cinematography, with its swooping camera movement often giving the film an ethereal quality. Mike spends his vacation developing an idea for a film, seeking immortality through creativity, and Sorrentino’s images indicate his search for artistic perfection. Mike wants his career — his life — to reach a crescendo.

Fred, as is repeated in the film, is ‘apathetic’. His demeanour suggests his life is fading calmly towards silence: not a crescendo but a diminuendo. But while Fred’s resignation is clear, moments of inspiration across the film suggest that age cannot extinguish a trembling flame.

We see Caine conducting a field of cows, as bells and woodpeckers harmonise in the background. We see him instruct a young boy to raise his left elbow while playing the violin, and the notes — which come from one of his own pieces — become more precise. The young boy returns later, as if in a dream, to thank him for his help.

Sorrentino throws in an array of secondary characters, including a version of Diego Maradona, the real Paloma Faith, and an unexpectedly eloquent Miss Universe character. Towards the end of Youth, her body becomes a symbol of idyllic perfection. But Sorrentino precedes this with an interest in sagging skin and wrinkled faces, so our perception of bodily perfection is altered. Miss Universe is made as universal as the elderly man and the ageing woman.

The comic and melancholic occur in equal measure in Youth, a tone appropriate to how the retrospection of two men uncovers what is laughable, beautiful, and inevitably heart-breaking about their past.

Perhaps the film’s weakness — or its unique selling point, which, to paraphrase a character in the film, depends on your perspective — is how Sorrentino blends this pastoral yearning with utterly modern, idiosyncratic moments that verge on parody. Paloma Faith in a nightmarish music video interlude; Maradona keeping a tennis ball suspended in mid-air with both his feet and obese torso; Paul Dano, a method actor staying at the Swiss hotel, dressing as Hitler for a role, and sitting in full-costume in the hotel’s pristine dining room.

But each of these aspects to Youth seem entirely conscious choices by Sorrentino, as he juxtaposes, or merges, the elegant with the grotesque, the old with the young. We see both the spherical Maradona and the angular Miss Universe striding in a pool; the tears of both Rachel Weisz’s Lena, Fred’s daughter, and Jane Fonda’s actress Brenda, the former appearing natural and youthful in comparison to the latter who is pale with excessive make-up in an attempt to retrieve her lost movie-star beauty.

As opposed to the world of excess seen in Sorrentino’s previous film, The Great Beauty, Youth explores death as a leveller — a fate for both those who are famous and those who remain unknown. Mike’s final line, ‘emotions are all we’ve got’, underlines Sorrentino’s primary concern in Youth: to explore the both the fear and joy of growing older, as we accumulate wisdom and regret along the way.

‘Youth’ is in cinemas from today.