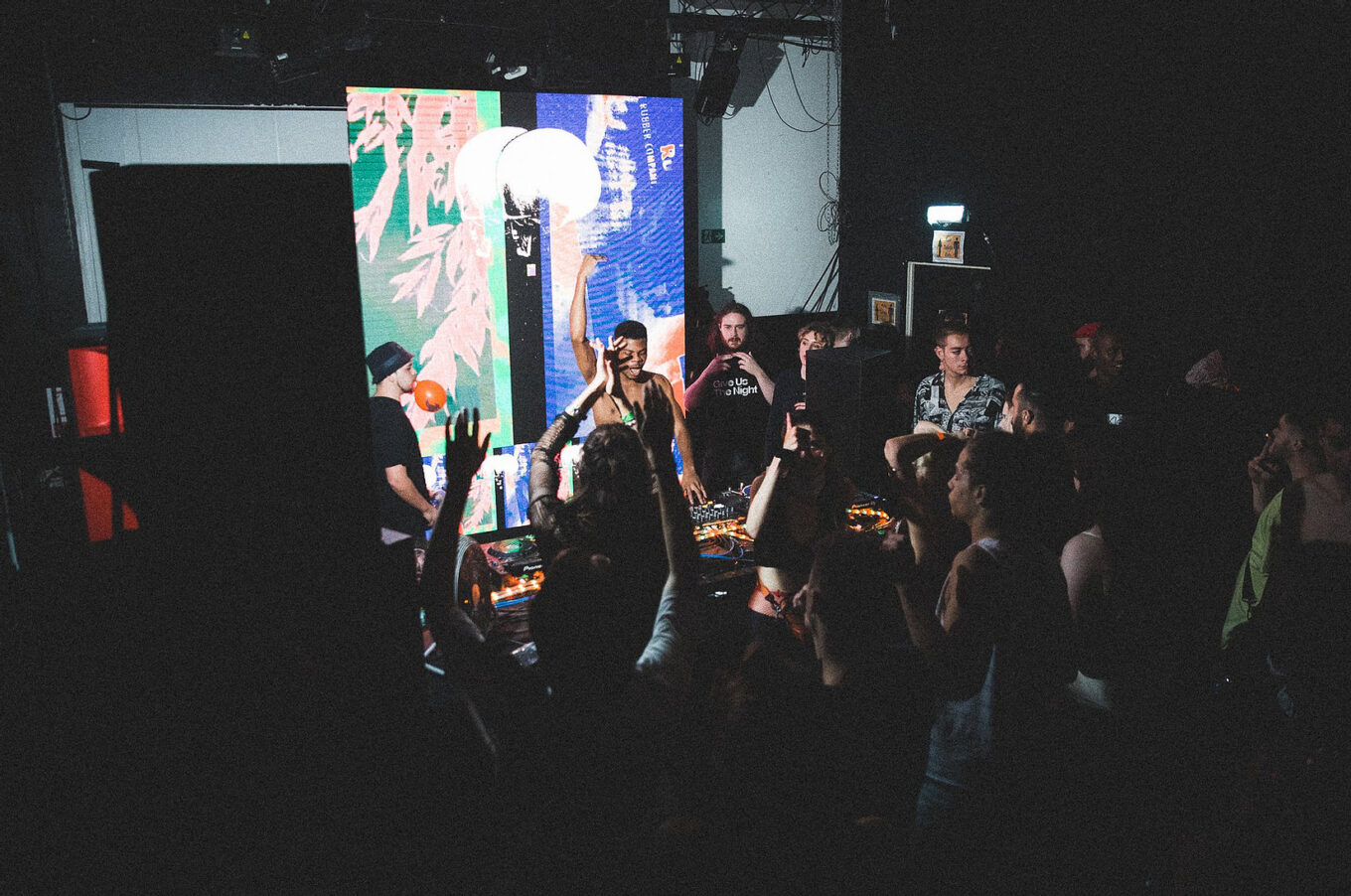 JAKE WALKER is a multidisciplinary artist at the Slade. His work spans dance, video, sound and drawing and explores how the body moves, as well as how movement can be recorded, choreographed and inspired. JEAN WATT spoke to him about his practice.

A lot of your work is about party and club culture, or exists within these settings. What has your experience been bringing these interests into an art institution?

So, initially, my work was more focussed on dance, rather than specifically parties. Then I started thinking about dance in a nightclub setting, making videos to play in clubs and trying to think about how people dance. I also just wanted to put art into traditionally non-art spaces. Sometimes I get frustrated with some of the tutors at Slade who tell me to focus on the gallery space. But I’m very happy to have videos up at raves and I think that’s just as exciting a way to show your artwork.

Of course, studying within an institution, there’s a certain pressure to show work in a particular type of space, one that echoes spaces they create and are comfortable with.

Yeah, and of course I’m not against showing in a gallery space. But meeting people at clubs and raves and speaking to the people who put the nights on is a very organic process. I can go up to someone at a rave and ask if they want to show my videos at their next party, but I can’t just go up to a gallerist and ask them to show my work in their gallery. It’s so weird at the moment, with clubs having been closed for so long, I would normally have videos up at a party every month so it was something to look forward to.

What have you been working on since clubs have closed?

I’ve been drawing a lot. I always draw and all the drawings I make are about movement, or have the potential to turn into dance. It was usually just in my sketchbooks, on quite a small scale, but now I’ve started working much bigger and feel ready to show some drawings when I go back to Slade. I’ve also been doing these drawings on disposable wristbands, I thought it would be cool to use them at a rave and each person gets one on their wrist. I was thinking of it in terms of the Banksy piece that he sold at auction and as soon as someone bought it it shredded. I like that idea of when you have all the wristbands together it’s like an artwork and then it gets distributed.

It reminds me of posters people put up in the street, advertising themselves as a guitar tutor or something, with lots of mini phone numbers to rip off.

Yeah exactly, I wanted to think about the idea of an artwork as not some fancy thing you have in a gallery, but something that everybody could own. And I like that as an artwork it’s sort of redundant as soon as it’s put on someone’s wrist because you can’t take it off very neatly and stick it up on a wall.

Were you classically trained in dance?

Yeah, I was at the Royal Ballet School from Year 7-10. It was full-on training, up to four hours of ballet every day, even on Saturdays. I got to the point where I just didn’t think I could do it anymore. The life of a ballet dancer is ballet all the time, your whole friendship group is ballet dancers, your relationships are all with ballet dancers, it’s such an insular world and it wasn’t for me. Exploring dance now, in an art setting, feels like I have more freedom. When you’re a dancer, you’re always doing what the choreographer wants of you and now, from my perspective, I have autonomy over what I want to do in relation to dance.

It was on your art foundation that you started exploring dance again, and working with algorithms, can you talk more about that?

Yeah, that was sort of the start of me looking at dance again from an arts perspective. The tutors were like, you have this amazing training you might as well make use of it. I was thinking about how movement is generated and new ways of moving and I was making a lot of drawings looking at this ballet notation called Benesh Movement Notation. Then, I decided to make an algorithm. The algorithm has all these different variables which will select a certain body part, like your right hand. Then it selects a start position, like eyeline-height in front of body, and then a finish position, like shoulder height to the side of your body. And then it would build up and become more complex, selecting a certain movement and telling you to reverse it with your leg. Or when you finish that movement, spiral outwards. I was also thinking about it as a form of drawing in space: your hand going between two points, and the shape it makes in space. The work was a printed out form of the code, the book of generated instructions and myself performing them.

And you had the work shown at The Harris Museum in Preston?

Yeah, there was an arts festival in Nottingham called UK Young Artists, which had an open call and I sent my work in. They selected me to be shown at the festival and then after that, the same organisation asked me to do the show in the museum in Preston. It was an amazing opportunity to have the work installed in such a crazy gallery space.

Do you still use the algorithm, or is it something you’d use in the future?

Yeah, especially if I had a chance to work with a group of dancers. I would love to choreograph for ballet dancers again. I understand how ballet dancers work and they have a way of processing things so quickly, they can pick up movement and just remember it. So I have these different tools: the algorithms and the drawings which I can use to start choreographing.

You also have a conceptual music project called z0it, can you talk more about that?

I recently did an album, as z0it, on this online label called Quantum Natives, and that was also made using algorithms. There’s a coding language which generates music through coding and I recorded sounds of ballet shoes sliding on the floor, flamenco shoes too, and used those to make the beats to make the music. I also used snippets of me reading instructions for movement. So the album was mixing these complicated rhythms that were intentionally hard to dance to, and voice clips of me saying body parts.

And finally, who do you take inspiration from? Artists, dancers, musicians…

Wayne McGregor is an amazing choreographer. The way he thinks about movement and how he has a starting point as an idea for movement and works with the dancers to create something is so interesting. Also, Bruce Nauman’s videos, I love his work. And I saw [a performance by] Anne Imhof at the Tate a couple of years ago which was so good. Also, there’s a DJ called Kode9 who runs a label called Hyperdub and once a month they have a night at Corsica Studios. In the first room of the club, they have an art installation, like a video projection or VR work, and then in the second room they have DJs playing.