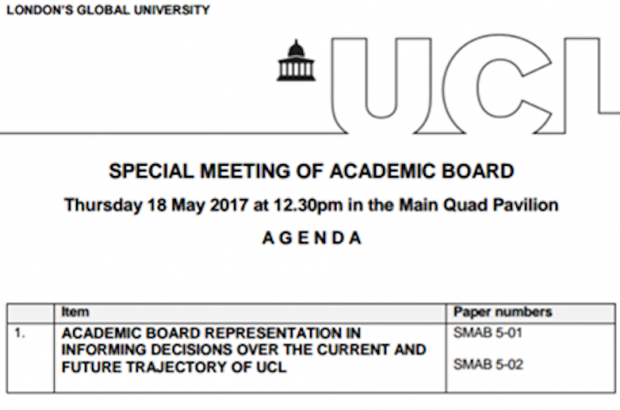 CHARLIE MACNAMARA reports on resistance from academics to management at UCL.

The Academic Board at University College London are set to clash with Senior Management this Thursday at a meeting which threatens to reignite disputes over the institution’s woeful finances and increasing corporatisation.

A group of high-ranking academics at UCL have formally called for a ‘Special Meeting’ to be held on Thursday 18 May, where they plan to convene a new ‘Governance Committee’ of the Academic Board with the task of ‘scrutinising strategic decisions’ about UCL’s future made by Senior Management.  Their intention is to return more democratic control to the Academic Board — UCL’s 1400-strong committee of senior academics — amid concerns about the Senior Management Team’s corporate regime and management of the College’s finances. 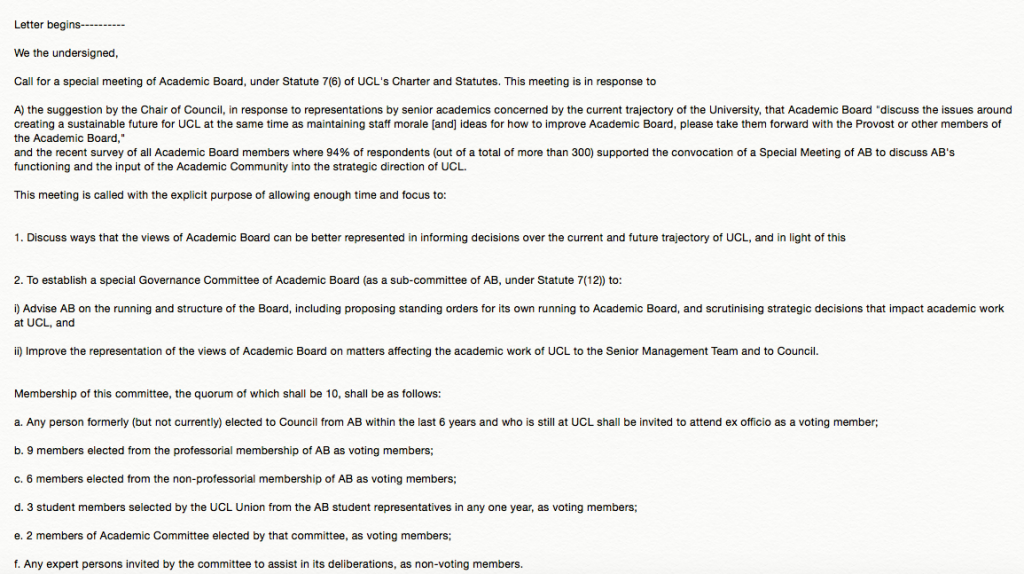 This move comes shortly after it was revealed in The Guardian that 68% of UCL’s Academic Board have doubts about the financial management of the College and serious concerns about the Senior Management Team’s ambitious expansion plans. Over 100 members of the Academic Board responded with additional comments to the survey: ‘Staff morale at all-time low! UCL is being run as a business and not as a university’, wrote one academic.

The Special Meeting has become a flashpoint for tensions between academics and management after Senior Management insisted on the addition of their own last-minute counter-proposal onto the meeting’s agenda.

Instead of the new ‘Governance Committee’, Secretary to the Academic Board Derfel Owen and the Senior Management Team propose the creation of a ‘Working Group’ chaired by Vice-Provost David Price — a toothless version of the Governance Committee that would ‘consider the options available to deliver long term financial, academic and reputational sustainability for UCL’ (Annex A). The counter-proposal itself was submitted in contravention of UCL’s Statutes, which stipulate that a ‘Special Meeting’ must only have one item on the agenda (Statute 7(6), p. 18), in a display of what one academic has called management’s typical ‘disrespect to academic governance’. 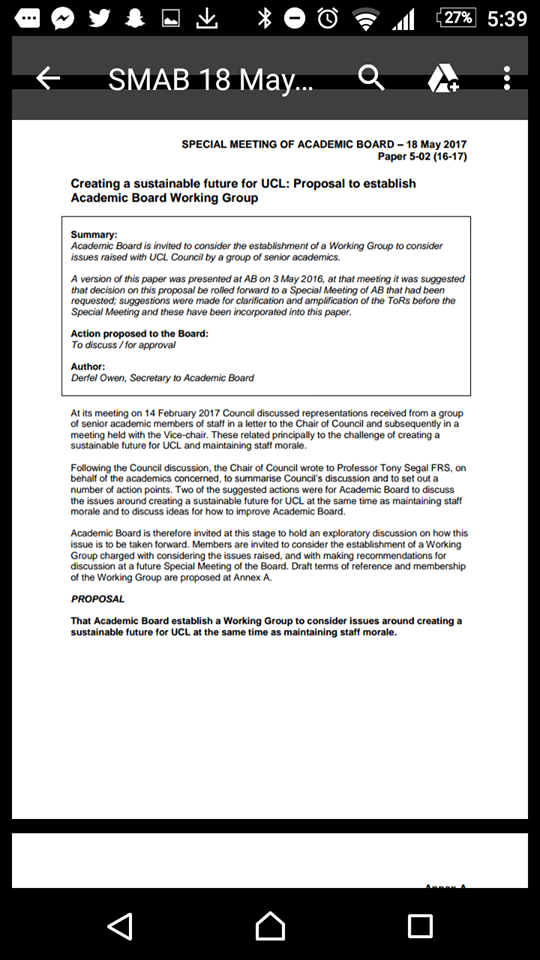 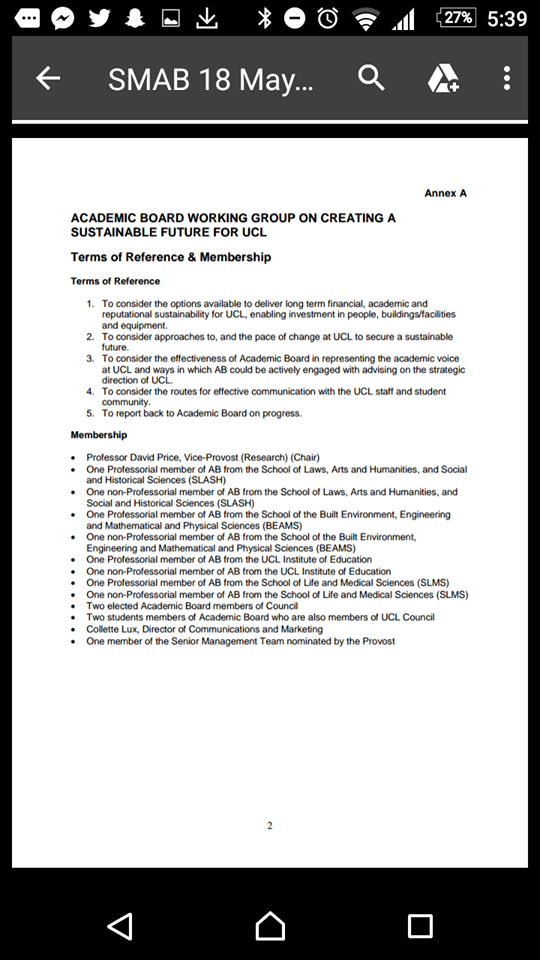 These proposals are to be voted on this Thursday. While Senior Management’s proposition is clearly a riposte to the academics’ proposed ‘Governance Committee’, it is seen by academics as constituting a threat to academic (and student) representation in decision-making at UCL. The ‘Working Group’ proposal would subtly redefine the independent oversight of the Academic Board, making it the responsibility of a committee that would be chiefly run by management and could be used to circumvent democratic consensus.

In fact, there is a high risk this management-led committee might be used to get around the Academic Board rather than to represent it. At Queen Mary University of London in 2009-10, the establishment of a ‘Senate’ was shortly followed by a complete overhaul and ‘modernisation’ of the College’s constitution, which involved the removal of important definitions of the academic body and who has a say in what, corporatising the College and its management structures.

In an email to the Academic Board, one of the distinguished senior academics calling for the Special Meeting, writes that academics will have to make important decisions on Thursday ‘concerning the future voice of the Academic Board as representative of the academic community at UCL’ and urges their attendance at the meeting: 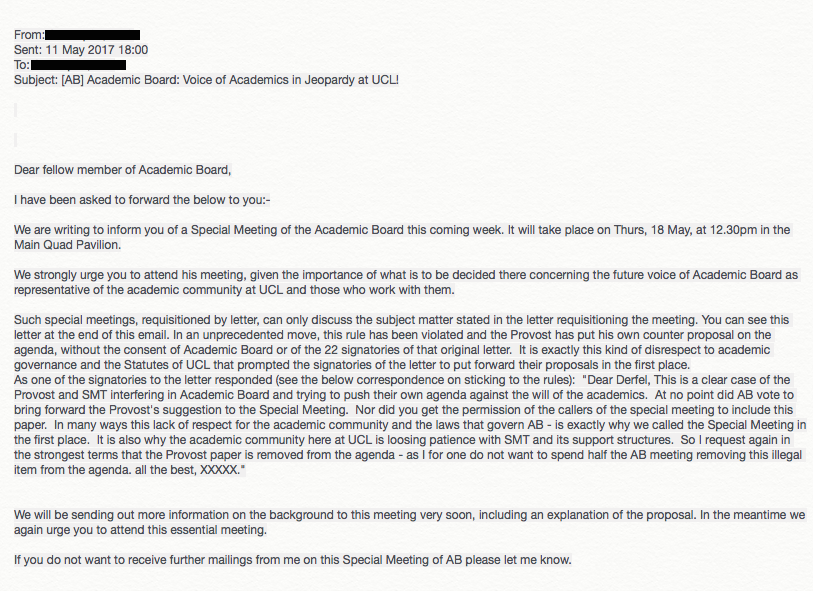 University College London Union (UCLU) have also condemned the Senior Management Team’s counter-proposal as ‘the beginning of a process of removing the voice of the academic community from vital discussions’. UCLU say that ‘the Special Meeting is the “last chance” to save academic representation in decision-making at UCL’ and call for students to gather to support academics outside the Quad Marquee where the meeting will be held at 12 noon on Thursday 18 May.

This is not the first time academics have clashed with Senior Management at UCL. A blog Save UCL (Again!) was started in December 2016 by a group of anonymous academics to provide information on some recent disputes between the Academic Board and Senior Management, such as last summer’s palaver over researchers’ ‘Discretionary Accounts’ — the easy-to-apply-for funding that ‘oils the wheels’ of research at UCL, which was sneakily merged into departmental budgets (themselves being cut) to save money.

These concerns come in tandem with a host of issues on campus, and it is the academic community that must bear the brunt of extensive cuts to departmental and research funding, enacted by management as they attempt to meet the costs of their £1.25 billion expansion plans in Stratford.

The expansion plans seemed risky back in June 2016 when the Financial Times repeatedly raised concerns that UCL is overstretched. UCL Provost Michael Arthur was forced to admit to the Academic Board that UCL is in a ‘barely financially sustainable position’. However, the plans are central to the management’s long-term strategic mission to transform UCL’s funding model from one based on government grants and research to a more business-like model based on tuition fees and revenues from its estates.

While UCL successfully negotiated an unprecedented £280 million loan from the European Investment Bank to help fund its expansion, no doubt with help from the Government (who see UCL’s increasing corporatisation as a flagship project for big picture changes happening across Higher Education in the UK), there is no guarantee that personal promises of a large government grant made to the Provost by Boris Johnson will be upheld after the June election. And impending Brexit makes this picture even less rosy, threatening, among other things, the high student intakes that are sustaining current costs.

In the meantime, students at UCL face overcrowded libraries and poor teaching facilities. They struggle for quality contact hours with overworked lecturers, and with uncertainty around coursework feedback and marking. Student Disability and Psychological Services have been forced to ration the assistance they can afford to offer those who need it. And things are equally bleak for academics and support staff, who are more stressed and overburdened than ever before. Cuts and restrictions to department budgets and increases in course sizes have meant an increasing workload, causing world-class researchers to become bogged down in mounting, pointless bureaucracy.

UCLU plans to ‘support our Academics’ on Thursday 18 May at 12.30 in UCL main quad. More information here.