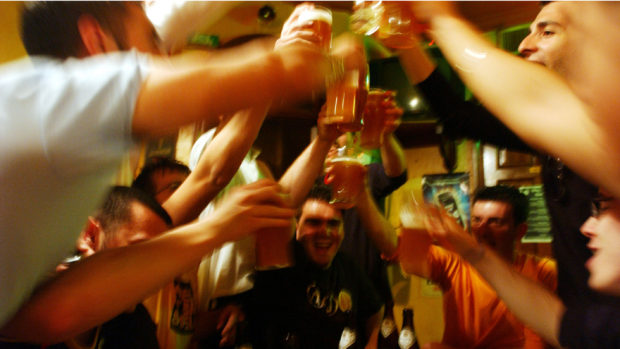 DAISY CLAGUE looks into the role of heavy drinking in university culture.

Waking up for a 9am with a headache and foggy sense of morning-after embarrassment is a familiar sensation for many of us. Whether you feel the need for a little Dutch courage in social situations or you simply enjoy the taste, it’s undeniable that alcohol is at the centre of mainstream student culture. On average students drink three times per week, and Drinkaware confirm that six in ten 18–24 year olds drink with the intention of being drunk ‘at least occasionally’ – I would say regularly. We pay little attention to the media lambasting binge-drinking young people, but is our drinking culture really something to be concerned about? Is heavy, regular drinking just a case of students blowing off steam or do we need to reassess the centrality of alcohol in our daily lives? It is certainly worth acknowledging that, as they are readily accepted as the norm, young people’s alcohol habits could have a greater impact than we realise.

A study by the Independent Scientific Committee on Drugs says that if drugs were classified on the basis of the harm they do, alcohol would be class A – alongside heroin and crack cocaine. The £4 million advertising campaign for England and Wales in 2008 asked: ‘You wouldn’t start a night like this, so why end it that way?’ We’re well schooled in alcohol’s consequences, and nearly everyone who drinks has had first-hand experiences of the negative results of a booze-fuelled night. Students’ excessive alcohol consumption cannot be explained by a lack of awareness as to its damaging effects.

So why do we continue to do it?

The taste of alcoholic drinks hardly justifies how much and how regularly we drink. Whether students drink because they rely on the sensation of muffled inhibition alcohol can bring about, because it is sociable, or because it is simply a right of passage, binge drinking is institutionalised in every level of university culture. Sports teams lead the charge of society initiations including heavy-duty drinking challenges. At UCL, RUMS teams – those run by medical students – are ironically renowned as being some of the most hardcore. Attending Sports Night without having had a lot to drink beforehand would be challenging – sober Loop survivor, Alice, says it was an ‘experience she wouldn’t recommend’, while another non-drinker says he’s had to build up a tolerance to ‘very annoying’ drunk people.

Having given up drinking for two years myself and only recently starting again, I can relate to those statements. International students, such as Omar from Bangladesh, are shocked at the sheer amounts of alcohol British students consume on a regular basis; heavy drinking five nights a week wasn’t something he had ever experienced before UCL. In Denmark, coffee dates replace the British norm of ‘let’s get a drink’, and there simply isn’t the same culture of meeting for a pint after class. Can and should international students, and those with any other reason not to automatically join in with the drinking culture, adapt to the British university drinking lifestyle? To what extent could a teetotal student wholly participate in a university sport’s team? How often are they left out when friends play beer pong or grab a pint at the pub? The fundamental role of binge drinking in student nights and society participation shows how embedded it is into the fabric of university culture.

Is this situation whereby alcohol is institutionalised and reliance on a problem? Arguably, if the pattern continues after university, then yes. Some people may just leave heavy drinking behind, but for those with a propensity for problem drinking (those who experience difficulties in life as a result of their alcohol intake), addiction can be stimulated and enabled by the social acceptance of alcoholic tendencies. Teetotal students are arguably marginalised from the mainstream university experience, too. One teetotal first year, Pete, has said that although he doesn’t feel pressure to drink, he often feels like he’s missing out.

Despite the widespread social expectation of heavy drinking at university, there is increasingly a culture for teetotal students too. More than 20 universities – not including UCL – have signed up to the NUS’s Alcohol Impact programme, which encourages responsible drinking and ensures teetotal students are not left out of social events. Theatre trips, concerts, and coffee meetings are an attempt to make socialising less alcohol-centric, and sober students do tend to find each other if they want to – the Facebook group ‘Sober UCL Events’ is a case in point. Even some teetotal sports players say that they go to and enjoy the socials – one first year tennis team player says that the rest of the guys were happy for him not to drink during the initiations. This action to legitimise student sobriety may be having an impact of its own: according to data in the Guardian, the number of 16–24 year olds who binge drink has dropped by 11 per cent since 2005.

Student binge drinking culture is unlikely to change anytime soon. A documentary for Eye Want Change, entitled ‘An Enquiry into Student Sobriety’, definitively demonstrates this. The filmmakers challenged 200 students to give up alcohol for just one week. Of them, only 60 agreed to participate in the challenge and only 10 actually succeeded in having a dry week. As the enquiry highlights, it is worth acknowledging students’ oblivious reliance on alcohol and its pervasion into our culture. If you were challenged to stop drinking, just for a week, would you be able to? As the documentary’s directors found, the answer, for many people, is no – suggesting the extent to which our binge drinking culture implicitly supports worrying levels of alcohol dependence. Perhaps this indicates that a reappraisal of student drinking habits is in order.