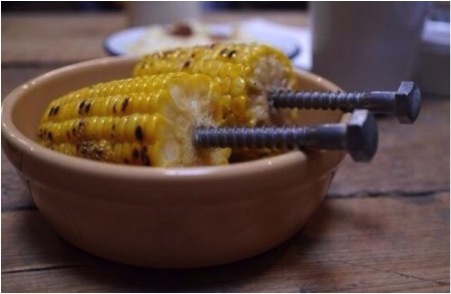 GEORGIE COWAN-TURNER gets stuck into the elite experience of alternative dining.

According to Time Out and Trip Advisor, the most popular restaurants are those that offer great food at a reasonable price. They market themselves towards a wide audience; both the food and the atmosphere are suitable for families, students, and date-nights alike. Yet the latest craze to hit the London culinary scene throws caution to the wind by eschewing these typical traits of popularity. ‘Alternative dining,’ as the movement is known, entails a sort of exclusivity. These concept-based restaurants are typically pricier and therefore often fail to attract regular customers, which isn’t really their intention. They provide us with a quirky, ‘one off’ experience, impossible to get anywhere else. You just need a bit of money to enjoy it.

Alternative dining restaurants provide unorthodox and potentially eccentric eating experiences. The question is: why do we feel the need to make eating more interesting? Perhaps Western civilisation is slowly eating itself up, gorging on boredom and decadence. Or maybe dining is just the latest fad of the entertainment industry. Alternative dining acts as both an extreme retaliation against impersonal chain restaurants and as a by-product of our quirk-obsessed society. The dawn of concept-based dining’s popularity has undoubtedly been facilitated by us, the Instagram generation. The trend satisfies the need to constantly post something new and different, even if it means eating out of a hat. A meal becomes a photo-op: the taste comes second to the likes.

As with any craze, it brings with it a wave of antagonism. This increasing ‘hipsterisation’ of food has brought with it annoyance at the ridiculousness of it all. The most amusing critic of alternative dining is the Twitter account @wewantplates, which pokes fun at how shallow, attention-seeking, and ludicrous the trend can often be.

Is it just a fad? Certain alternative eateries across London have significant clout and do provide genuinely exciting experiences, not just opportunities for kooky Instagram posts. Perhaps London’s most famous (or even infamous) concept-based restaurant is Dans Le Noir, which made its name in Richard Curtis’s recent film About Time (2013). Guardian food critic, Jay Rayner, asserts that the food is better ‘not seen in the light of day,’ but in critiquing it as such, he misses the point entirely. Alternative dining is not necessarily a foray into fine dining; the food is not the intended to be the star of the show. Dans Le Noir submerges its customers in total darkness, allowing them to experience a blind date in the truest sense of the phrase. Its greatest virtue is, however, that it allows us to escape technology entirely. All digital devices are prohibited, meaning no Snapchat stories documenting the evening, no texting mid-conversation; just complete focus on the dining experience and your companions.

The technology-free darkness of Dans Le Noir lends itself perfectly to dating. The darkness removes the awkwardness of a first date, eliminating usual worries over untimely trips and spillages: in the dark, no one has to know. It also removes the element of preformed, superficial judgement so integral to romantic interaction. In many ways, it serves as a retaliation against popular dating platforms such as Tinder, which champion judgements based solely on appearance rather than personality. In the wake of Tinder’s success, a market has definitely opened for places such as Dans Le Noir, which encourage us to value personality above mere aesthetics, reinventing romantic dining in a largely unromantic age.

While the beauty of Dans Le Noir lies in its ability to focus your senses, other alternative dining experiences achieve similar success by overwhelming your senses. For those of us interested in the truly bizarre, Abracadabra in Mayfair may be worth a visit. It claims to provide a truly unique and eccentric eating experience. At the heart of the restaurant is a revolving table, which allows guests a constantly changing view of the restaurant. The view itself consists of individual booths, each with their own theme, ranging from boudoir to Disney, with a large number of phalluses thrown in for good measure.

However, alternative dining can still be entertaining without this extremity. For those of us who are not interested in such an off-the-wall experience, there is Sarastro in Drury Lane. A more family and student friendly restaurant, it maintains the aspect of fantasy, but at a more reasonable price (£25 per person on average). Waiters sing in operatic voices whilst they serve your food. The atmosphere is surreal, almost a hybrid between a Lewis Carroll novel and the set of a Shakespearean play. Like Dans Le Noir, these eateries provide a sense of escapism. Dining is elevated from a mundane necessity to a form of entertainment.

The greatest challenge for alternative dining is the potential for the novelty to wear off. We, as a nation, are becoming bored with nightclubs, as the Association of Licensed Multiple Retailers (ALMR) recently revealed, stating that over half of the UK’s nightclubs have closed down since 2005. This ennui has translated itself into the desire for something new to fill our evenings and take our money, a vacuum which alternative dining has, at least for the moment, filled. Yet I fear the fate of nightclubs foreshadows that of alternative restaurants, especially in a city as vibrant and ever-changing as London. In a city that is constantly evolving, is boredom (and thus the fade of each and every fad) inevitable?

As with many elitist London experiences, difficulties arise with the cost. This renders the alternative dining experience exclusive and therefore inaccessible to students and those on lower incomes. The student loan certainly doesn’t extend to Dans Le Noir, where a meal for two, including drinks and service, costs £120. As a replacement of nightclub culture, this raises a serious obstacle. As a reinvention of the dining scene, it arguably represents the ever-widening income gap. Thus alternative dining becomes a status symbol. Its exclusivity renders it attractive to those who cannot afford it. No one knows when the novelty will fade, but it’s an issue only the wealthy need to worry about.