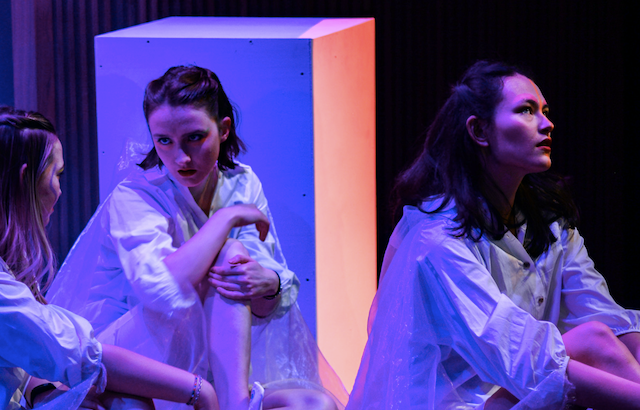 Well, that was certainly a ride. A ride into the Underworld, to be precise, packed with a few too many jokes about the tube. In fact, there wasn’t much that Frogs – a neon whirlwind of enthusiastic choreography and topical references – wasn’t packed with. Amongst all that pizzazz, however, Frogs never quite caught its breath and explained exactly what was going on. Dazzled by the colour and sound – and the size of Aeschylus’s jeans – my mind was still dimly bleating such seemingly irrelevant questions as: What is the setup? What is the story? Who is who, what is what, and why are they on roller skates? Frogs had me thoroughly confused; but also thoroughly delighted. It privileged fun, and was therefore a very enjoyable show.

As I have now learned from Google, the play begins with Dionysus setting off on a mission to retrieve the late poet Euripides from Hades, having decided there are no decent tragedians left in Athens. In hindsight, I can see how all this was being conveyed, but at the time it was flying over my plebeian head somewhat. Dionysus engages in a witty exchange with Xanthias, his physically and intellectually superior slave, who he succeeds in employing to come with him on his mission. Then follows another repartee with Dionysus’s half-brother Heracles, who lazily evades the God of Wine’s requests for advice on how to reach Hades; then finally another with Charon, who agrees to ferry Dionysus across the Lake, while Xanthias has to walk.

Frogs is filled with piquant, amusing back-and-forths, wonderfully delivered by the actors who are clearly quick-minded, skilled, and completely sensitive to their text. The problem for Frogs lay in its insistence on cramming said text with allusions to our current moment. The fourth wall was constantly being broken, often by remarks that the audience wouldn’t understand the Greek context. Ironically, though, what has always been the beauty of theatre from another time is that beneath the differences in cultural understanding, our similarities shine out all the more clearly. Where political systems fade away, human experience remains. So we didn’t need contemporary knowledge and humour crammed in to be reminded of our shared humanity; just a few moments of embarrassment, pride, and envy. If the play had slowed down a little and allowed itself to take pleasure in its own comedy a bit more, it would have better brought the audience into said comedy than it did with constant frantic nods towards us.

Then again, as someone whose greatest Homeric experience is watching the Disney version of Hercules, I wonder if I’m one to talk. Plus, everyone else was laughing. And hats off to the translators and writers, who did a wonderful job. It was fast paced, with a pleasing amount of toilet humour, and an excellent whipping scene. Frogs was the labour of love of its director, Vera Aguirre, and the monumental amount of work that has gone into the production is evident, and, I think, part of what makes the show so enjoyable. It all came together into an awesome achievement, a tour-de-force, and one that was weirdly hypnotising, visually compelling, and engaging without always making sense – which I think is an achievement in itself and speaks to the talent, effort, and camaraderie of the whole team. The chemistry between the actors was great, the set and the costume was creative and stylish (Aeschylus’s jeans, though… I just… how were they so big? How? I can’t un-see them) and the chorus, in particular, delivered mesmerising and beautiful moments of song and speech, dressed in white sheets and neon face paint. I’m also pretty sure that at one point someone brandishing a cucumber cried ‘let them speak through art!’ which is just excellent.

Frogs was at its best when it stopped trying to drag itself into the 21st century with jarring jokes and heavy-handed truth bombs, allowing its Greek Gods to be Greek Gods, unconcerned with such trivial matters as Brexit and BoJo. And, as an audience member, it was its best when I allowed it to take me into its mythical world: a world of campy Gods who fancy everyone they meet; a world of light-hearted desire, inconsequential violence, ‘sweethearts’ and shoulder slaps. It was fun. It was silly. Nothing really mattered. And as such, it was a welcome reprieve.