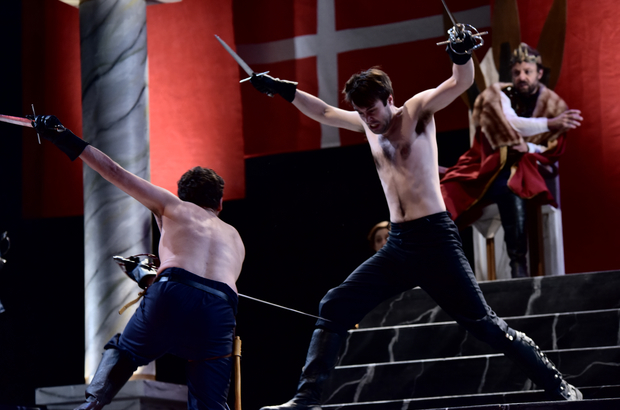 For there is nothing either good or bad, but thinking makes it so: to me it is a prison.

Hamlet is one of Shakespeare’s best-loved plays: his famous story of a brooding prince is rarely off the British stage. In keeping with their artistic policy to ‘defy the stigmas surrounding mental health’, the founder and director of The Icarus Theatre Collective, Max Lewendel, has focused this production on the prince’s inner torment in an effort to raise awareness about mental health issues.

Nicholas Limm’s Hamlet is full of unrestrained energy and emotion. Some of the most powerful scenes of the production are those when Hamlet’s grief goes into free-flow, first in the bedroom scene with his mother Gertrude (Portia Booroff) and then over the death of Ophelia. Limm’s performance powerfully communicates his sense of loss after his father’s death, something enhanced by the production’s innovative decision to personify his tumultuous thoughts on stage. Hamlet’s psychological torment is brought to life by plain-clothed actors, who orbit around Hamlet, speaking with him in unison or arguing with each other in order to symbolise his frequently conflicting opinions.

This works particularly well in the tense scene in which Claudius (Will Harrison-Wallace) kneels to pray  and Hamlet towers above him, knife in hand. Here, Hamlet’s soliloquy is vividly brought to life by two other actors and the three of them proceed to argue and debate about whether to kill Claudius. By personifying Hamlet’s internal conflicts, Lewendel foregrounds the play’s concern with mental health and lends Hamlet’s psychological disturbance a dramatic immediacy.

Ophelia’s characterisation is similarly refreshing. While Ophelia has been interpreted as passive in the past, Kerry Gooderson finds new emotional depth and charm in the character. She frequently confronts Hamlet, asserting herself before him rather than meekly accepting his denial of his love for her. Her voice is unfaltering, exuding confidence even when she is made to second-guess herself by the men in her life.

Gooderson’s sympathetic performance consequently makes her descent into madness all the more poignant. After learning of the death of her father, Polonius (Robert Harris-Hughes), Gooderson’s performance shifts: she dispenses flowers to her fellow actors with a childlike sweetness and simplicity. Her shattered self stands at odds with her earlier strong-willed personality. Her performance highlights the fact that mental health issues can strike even the most strong-willed amongst us. Her eventual suicide is revealed to the audience and Hamlet in the same moment, creating an affinity between spectator and character, with Limm’s portrayal of the prince’s pain powerfully reflecting our own.

The characterisation of Hamlet and Ophelia aside, the otherwise traditional nature of the production often restricts its ability to dismantle stigmas surrounding mental health. The production’s attempt to have an open, frank discussion about mental health and break down the stereotypes about mental illness that persist today would have benefited from being set in a more current context. A less elaborate set and more minimalistic costumes would have emphasised the conceptual issues the play was trying to tackle. Promoted as ‘Shakespeare for the Game of Thrones generation’, the gratuitously violent scenes – such as the fake blood in the final scene, which spews across the stage – also serve to sideline the more important issues that the production tries to bring to light. These fight scenes tend to become the moments of highest drama, moving the focus away from Hamlet’s and Ophelia’s state of mind.

Nevertheless, The Icarus Theatre Collective has clearly identified theatre’s potential as a powerful medium through which to raise awareness of mental health issues. Aside from producing pioneering productions such as this, the company runs school workshops about mental health and drama. The company believe  theatre ‘allows [young people] to express their feelings in a non-judgemental environment’. This aim is of utmost social and artistic significance: Hamlet is, of course, not the only young person for whom thinking can turn into a prison.