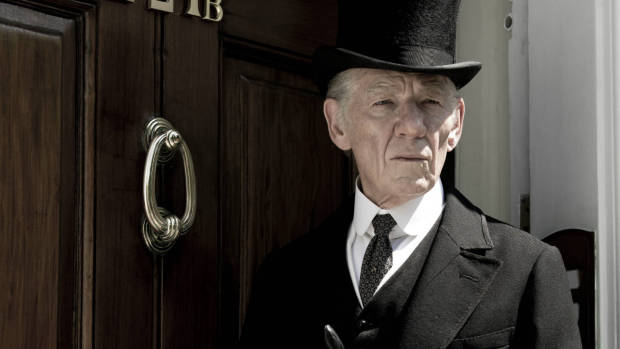 Mr Holmes has its flaws, and the storytelling structure gets a bit muddled at certain points, but none of this detracts from the fact that, overall, this is a finely made film. Bill Condon, taking a similar approach to his earlier Gods and Monsters (also starring Ian McKellen), depicts an elderly Sherlock Holmes, haunted by his past and searching amidst his waning memory for the clues to solve an unresolved case. It’s an incredibly quiet and understated film which may not work for everyone but it certainly worked for me.

McKellen’s performance is similar to his portrayal of film director James Whale in Gods and Monsters: both are nostalgic and intelligent men whose best days are behind them. The difference, though, is that whereas Whale is depicted as charismatic and hedonistic even in old age, when we are first introduced to McKellen’s Holmes he’s a gruff, miserly and rather tired old man. This is certainly a mannered performance, with McKellen’s huffs, grunts and puffs ageing him further beyond his years, but it works beautifully in accentuating Holmes’ history, and his wear and tear. There’s an insensitivity and broken pride to every word he says in the initial present day scenes, but it is under the surface, hidden by Holmes’s reserve.

McKellen does not convey warmth as Holmes but rather a sort of weakness. We haven’t seen anything of his past yet, but we can tell that he’s a shell of his former self. The greatest challenge of this character, compared to any other depiction of Holmes, is to suggest genius through implication, the remnants of a former brilliance. McKellen is technically perfect in portraying this slow mental decline as his mind succumbs to dementia. But the inquisitiveness he brings to every sweeping look or glance shows that while he may be in retirement, his brain is still trying to piece together mysteries large and small, and none more than the one that haunts him most: the one that drove him to his retirement.

The initial stages of his investigation set up many effective scenes with Milo Parker as his housekeeper’s young son, Roger – effectively a replacement Watson – in which they discuss the little clues around Holmes’ study which may link him back to his past. McKellen beautifully paints the joy and enthusiasm the investigation restores in him in these scenes. Condon’s direction is languid: relaxed in the casual tone it takes, yet with a hint of mischievousness too.

In a clear parody of the “heroic” Holmes of earlier films, one scene in Mr Holmes involves the eponymous character sitting in a cinema watching a fictional depiction of himself played no less by Nicolas Rowe who, in a feat of meta-casting, played a schoolboy Holmes in Young Sherlock Holmes (1985). The deconstructive nature of this scene may have not worked as well in other hands (especially for one like me who loves those old flicks with Basil Rathbone), but McKellen plays it beautifully. On one hand he scoffs at the film, criticising it for being a complete fallacy; on the other hand, there’s an inner pain which implies shame at not being the man people have idolised him to be, who gets it right every time. It’s a wonderfully filmed moment that manages to be both clever and emotionally charged – no mean feat.

McKellen’s younger Holmes is by no means the stereotype: he readily admits to not being many of the things Watson describes him as in his novels. Despite this honesty, however, there is always a hint of artifice and arrogance in his younger self, suggestive of Holmes’ logical astuteness and self-assurance. McKellen hits these notes flawlessly, presenting a version of Holmes who is not the overly romanticised idea of the detective –  and neither does he want to be. He never overemphasises Holmes’s supreme intellect, choosing instead to subtly weave it into his general disposition towards both his cases and life in general.

His most subtle moments of acting are in the scenes where he has to track down the troubled wife of a client, Ann Kelmot (Hattie Morahan), and give her the ‘final solution’ to her problems. In this scene McKellen alternates between being a charming old man – a willing listener – and an unsympathetic, highly logical man. He wonderfully melds these different aspects of character to incredible effect. By slowly stripping away Holmes’ shield of logic, McKellen makes it all the more heartbreaking when he returns to denying human contact in favour of logic. He deftly portrays Holmes as having slipped out of his former self into his present self through unsettlingly and movingly revealing how his final case has broken him, and in turn helping to establish the big dramatic scenes of the story.

McKellen brings an emotional volatility to his performance throughout Mr Holmes. The film’s present day scenes, where Holmes’s suffers from his deteriorating mental condition, are marvellously realised; in particular, his reproving of Roger for attacking his mother because of their menial position in life. Laura Linney’s performance as Mrs. Munro, a mother deeply hurt by her son, in this scene is superb, but it is McKellen who brings the real power in his portrayal of man who, despite being distanced from people for many years, isn’t entirely devoid of emotion. Holmes’s quiet breakdown later in the film is extremely disconcerting and moving. Within a few moments, McKellen has released his character from logic, reducing him to a tragic overflow of feelings and sadness.

‘Mr Holmes’ was released in cinemas in June this year.