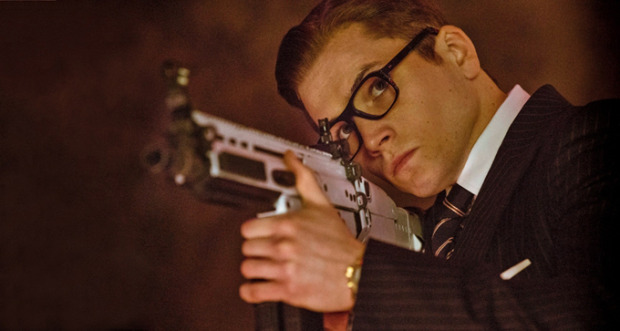 THOMAS HETHERINGTON continues our review of the year’s best films with his look at Matthew Vaughn’s madcap spy spoof, Kingsman: The Secret Service.

Many a fantastic sight has graced the silver screen in 2015. Charlize Theron has leapt between speeding cars in spectacular fashion in Mad Max; whole cityscapes of the imagination have been stunningly realised and beautifully rendered by Pixar in Inside Out; Eddie Redmayne has talked to an alien dinosaur about Mila Kunis’ eggs in Jupiter Ascending.

But nothing beats the moment in which Colin Firth shoots a Christian fundamentalist point blank in the face, and then proceeds to slaughter an entire congregation in one breathtakingly balletic take of cinematic sublimity. All sound tracked to Free Bird by Lynyrd Skynyrd. A-mazing. You thought that nobody could top the moment Peter Jackson unleashed a lawnmower upon hoards and hoards of zombies in Braindead? You clearly weren’t expecting the moment that Matthew Vaughn set Mr Darcy on a mouth-foaming rampage of cataclysmic effect.

Kingsman reduced me to a giddying, giggling, gleeful wreck. Why? Maybe it’s the fantastic counter-casting. Mark Hamill pops up as an eccentric English physics professor, Samuel L Jackson plays a lisping megalomaniacal villain, and then Mark ‘the evil bald man’ Strong plays a bad-ass Glaswegian version of Q. But equally fabulous is the use of eye-boggling camera trickery, Paul Kirby’s inspired production design and Vaughn’s knack for a well placed pop song that rivals Tarantino. Ultimately, however, the film is a culmination of a creative vision so bold that it knocks your socks off with your feet still inside them.

Other films this year have been this ambitious too; it’s worth mentioning the valiant, if less successful efforts, of the Wachowski’s Jupiter Ascending and Brad Bird’s Tomorrowland. Both of these films bucked cinematic trends and conventions and attempted something different. But where Vaughn’s film wins the day is in its ability to have its cake, throw it in your face and then wipe it off and eat it all up. Many are heralding George Miller’s Mad Max: Fury Road as the film of the year. Yet, despite its many many merits, it lacks the sheer surprise factor of Kingsman’s attitude and plot – and it isn’t half as daring.

In recent years action cinema has been getting a little bit, well, for want of a better word, ‘Nolanish’. Of late James Bond has only been doing press-ups to get a better look at his navel. Kingsman, then, feels like a counter-attack to Hollywood’s current trajectory. Vaughn has created a film that mocks the ponderous tone of Skyfall and the preposterous nature of the Moore-era Bond films with a cheeky, loving, wink.

It has to be acknowledged, though, that Kingsman isn’t for everyone. I was trying to think of ways to defend the film when I realised that in doing so I was entirely missing the point. This is a film that stands up and screams how awesome it is in your face. And if you don’t like that you can go home without a party bag: it really couldn’t care less whether you liked it or not. Which is all very bold given that Vaughn coughed up $81 million from his own pocket to get it made.

This is by no means a perfect movie; at times its testosterone levels rocket to hair-shedding highs and the violence is more than once a little mean-spirited. But Kingsman is one of the purest visions of auteurship this decade. In self-funding the film Vaughn managed to avoid any studio intervention meaning that what we see on screen, for better or for worse, is entirely his vision. There’s something to be said for a director who gives over $81 million just so he can tell the studio to sod off and do what he wants.

And in doing what he wants Vaughn has given us a lot to feast on. The skydiving scene, for example, which sees our heroes hurtling towards the ground at an alarming rate whilst trying to figure out who has a faulty parachute, is shot like none before it. Cinematographer George Richmond weaves his camera in and around with dizzying fluidity.

Exploding heads? …So what? David Cronenberg knocked that out of the park thirty years ago in Scanners. Exploding heads that sear across the screen like the fifth of November? Now you’re talking. Vaughn has set off an explosion underneath the stuffed shirts of the film industry that should echo for years to come. And it is, in the words of Mark Strong’s Merlin, ‘fucking spectacular’. BOOM!

‘Kingsman: The Secret Service’ was released in cinemas in February this year.