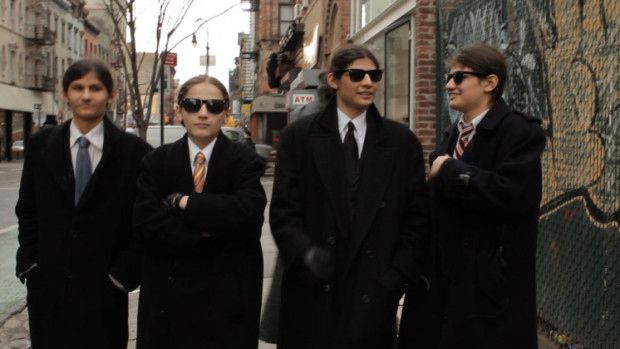 HELEN QUAH continues our look at the year’s best films with ‘The Wolfpack’, Crystal Moselle’s documentary telling the incredible story of the Angulo family.

Crystal Moselle’s documentary The Wolfpack explores the lives of the Angulo family: Bhagavan, 23; twins Govinda and Narayana, 22; Mukunda, 20; Krisna (aka Glenn), 18; Jagadesh (aka Eddie), 17; and 25-year-old sister Visnu. The siblings were locked away in an apartment on New York’s Lower East side for 14 years by their father Oscar, who was determined to isolate them from the dangers of the city. The boys describe how they barely left the apartment, barring one annual trip outside where they were told not to speak to anyone. At one point they recount how one year they never got out at all.

The story of how director Crystal Moselle discovered the Angulo family is even more surprising. It was her instinct to stop the six brothers as they walked down First Avenue, on what was, unbeknownst to her, one of the rare occasions they left their apartment. Presumably she was captured by their distinct appearance; all six with long black to-the-waist hair, dressed in neck-ties, ill-fitting black suits and shades. This led to the formation of an unlikely friendship between Moselle and the brothers, who eventually would let her into their home. Over the next four years she would film the family and gain access to the many home videos they had made, leading ultimately to the creation of this film, which won the Grand Jury prize at the Sundance Film Festival earlier this year.

This unique documentary is in fact an incredibly personal and thoughtful insight in to the brothers’ lives. It avoids sensationalism and sees the Angulo family in a realistic light. With a compilation of home videos and interviews, minus the conventional voice-overs, The Wolfpack lets the boys speak for themselves. Indeed, it showcases a group of charming, intelligent and charismatic young boys, not jaded by New York City – a world they were never truly exposed to.

The Wolfpack is in a way a celebration of film itself, as the brothers’ salvation from their confinement involved watching hundreds of films: British and American classics from their father’s extensive collection. The brothers talk about their love of film vehemently, discussing how it allowed their creativity and imagination to run free, and explaining how everybody learns about the world from film–in the most extreme sense in their case. The boys turn to copying out scripts of their favourites, which they then sculpt costumes for out of whatever they can find – like yoga mats and cereal boxes – and re-enact whole films off by heart for their pleasure. Tarantino’s Pulp Fiction and Reservoir Dogs as well as Christopher Nolan’s Dark Knight being some of their favourites. Film became the most powerful form of escapism from their four-bedroom apartment, making them feel, as one of the brothers describes, “like I’m living.”

Slowly the story unfolds of their Peruvian father Oscar who met Susanne, his American wife and mother of the Angulo brothers, on a Machu Picchu trail in South America before moving to New York. Susanne was also confined to the apartment, home-schooling the boys because, as she explains, her education taught her that socialisation was not a wholly positive experience. In the film she talks of how she regrets the boys are not able to experience the outdoors like she did as a child in Michigan. Her own victimisation is evident in a scene where she speaks to her family for the first time in decades.

With Oscar being the only one with access to a key, he remains throughout a mysterious and dark figure, barely seen in the first part of the film: Moselle first focuses on the brothers’ perspectives. They explain their father’s motives for keeping them locked up. His long-term plan was to create a tribe-like family and not remain in New York, but was constrained by his beliefs against working for a living. The film doesn’t hold back from showing his drunken and sometimes abusive behaviour, depicting a far from united family.

However, we as an audience are left to make our own judgement, and instead we find ourselves wrapped up in the characters of the brothers – enigmatic and extremely bright, despite their upbringing. As well as funny and enlightening scenes, there are obviously emotional scenes where the magnitude of their father’s actions on their lives is given its rightful moment. But as their desire to leave the apartment grows, the film marks the brothers’ development into young adults.

Just like any teenager, the brothers become rebellious and defy their father. In April 2010, one of the brothers, Mukunda, decides to break out of the apartment, marking the moment the boys could no longer be kept away from the excitement of the streets below. From then on they venture out into the city as a pack. When we step out of the apartment with the brothers on one of their outings to Coney Island, we experience their initial fear of a crowded and busy beach with the potential for interaction with others. We feel their anxiety as well as excitement for the outside world, somehow seemingly brighter and more beautiful after experiencing their darkened apartment.

Their miraculous run-in with Moselle and the making of The Wolfpack opened the doors to the Angulo brothers to gain more independence and allowed them to become involved in the film industry that they love.

I would urge anyone to go and see what is a brilliant, thrilling exploration of human behaviour, brotherly relationships and triumph against adversity. Rather than being solely about imprisonment, the film celebrates creativity, imagination and life, qualities the Angulo brothers all share. The Wolfpack is an incredible story that needs to be seen to be believed.

‘The Wolfpack’ was released in cinemas in August this year.