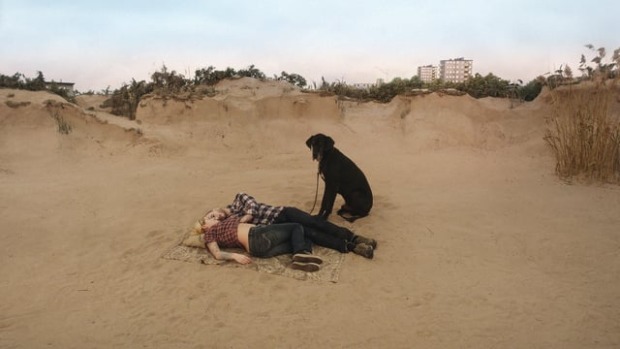 NOAH REICH continues our look at the year’s best films with Roy Andersson’s dreamlike black comedy, ‘A Pigeon Sat on a Branch Reflecting on Existence’.

In the most quietly daring film of the last 12 months, director Roy Andersson completes his ‘trilogy about being a human being’ with a remarkable dissection of the preoccupations, concerns and curious behaviours of the human race.

We are guided through the film by novelty salesmen Sam (Nisse Vestblom) and Jonathan (Holger Andersson), roaming around a sterile and noticeably beige Swedish suburbia with sloth-like vitality. Their goal is to ‘help people have fun’, but we are left asking ourselves where it is possible to find real happiness in a world of utter plainness and banality. ‘Why are you so angry?’ Jonathan asks his business partner with strange poignancy, as Sam stares back blankly. Anger, perhaps, isn’t overtly present here, but an underlying anxiety certainly is. ‘I’m happy to hear you’re doing fine’ repeat various characters to each other over the phone, dispassionately.

Between our intermittent meetings with the duo are encounters with situations of varying absurdity, but Andersson retains an unwavering focus on the aspects of the human condition upon which he has decided to study. A loose thread of characters who blend seamlessly from vignette to vignette is indicative of a director keen to guide the viewer in his direction without a need to tell the audience what he wants from them explicitly.

Andersson may be as lonely as his protagonists – the film, after all, was four years in the making, and largely financed by his direction of advertisments in his native Sweden. One can’t help but feel, watching Pigeon, that he may have felt artistically shackled in this pursuit, and he allows this feeling of confinement to bleed into his work. A cheese salesman even turns to lament his meaningless existence to the camera itself – his assistant mocks him in the background.

The constant grind of day to day life is, repeatedly, bitingly, satirised, culminating in the denouement of the piece in which a man, on his way to work, is unsure of what day of the week it is. The bicycle shop in the background begins to take on allegorical importance as the scene unfolds – as a customer passes by to pump up his tyres, the eye is drawn to the spinning wheels and their juxtaposition with the total stagnation and sterility of the life around it.

People are disconnected, yet indebted to each other – solitary, yet reliant. Andersson’s characters seem to long for companionship, whether young or old, working or unwinding, and his desire to portray human connections becomes increasingly touching as Pigeon meanders on.

Andersson manages to draw exceptionally intelligent and incisive comedy out of the tragedy inherent to human existence, leaving the audience uncomfortable and unsure of whether to laugh or cry. The remarkable intricacy of each of the film’s vignette reminds us of the depth and incomprehensibility of human emotion – the slightest movements of characters occupying the periphery of the static frame are rendered somehow important in an almost indescribable manner.

Shot as tableaux, the camera remains entirely unmoved from its regressed, mid-shot perspective throughout each vignette in Pigeon. Andersson, along with cinematographers Istvan Borbas and Gergely Palos, chooses to keep a distance from the action, suggesting that we can look at the protagonists superficially without being able to touch them. We analyse their movements and behaviour from afar without fully comprehending their intricacies.

Andersson thus puts the viewer in the position of the titular pigeon, cooing from above during the final scene, who must look upon the human race below in a confusion of awe and bewilderment. After all, as the film shows us, we are a species which wages war and tortures animals for our own entertainment, exploiting and using our common man for personal gain and amusement.‘Is it right using people only for your own pleasure?’ asks Jonathan. His question is swiftly dismissed as pointless philosophising. Perhaps everyone is simply ‘doing fine’ after all.

‘A Pigeon Sat on a Branch Reflecting on Existence’ was released in cinemas in April this year.