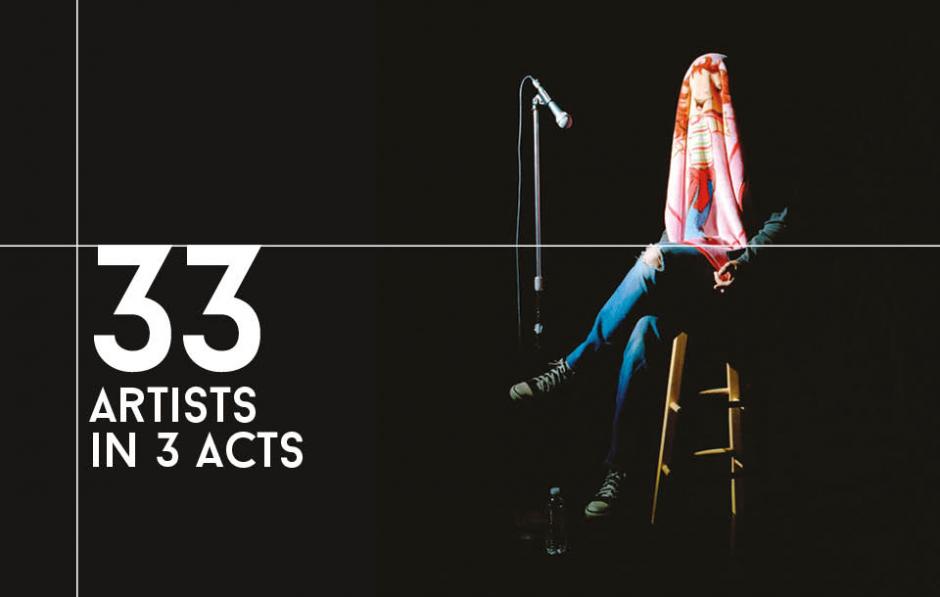 Sarah Thornton’s discussion with artist Isaac Julien about her new book, 33 Artists in 3 Acts, is the second Granta-hosted event I’ve attended, and very different to the first. The discussion, taking place on a rainy night at the London Review Bookshop, had for its audience a collection of well-dressed art lovers, adults, and adoring university students. It was an informal situation due to the venue’s size, with a glass of wine included in the ticket price – the floor opening up for questions at the end. When I arrived, dripping with rainwater, the staff of the LRB were jokingly talking amongst themselves about a new window display involving a live chicken.

Thornton, with degrees in Sociology and Art History, left the world of academia to contribute to The Economist and other publications. In 33 Artists, she provides insight into the contemporary art world through interviews conducted with artists across the globe. The book is comprised of three sections, or acts: politics, kinship, and craft. It also includes a world map pinpointing the locations where the scenes take place. Thornton interviewed around one hundred fifty artists in total during her five-year stint of research; based on the framework of her book, however, many had to be ‘left on the cutting-room floor’, thus featuring only the titular thirty-three artists. Thornton describes herself as a stickler for detail, sizing up and documenting everything about an artist and their workspace, from their clothing and manner of speaking to the state of their bathroom.

During the discussion and questions, Thornton and Julien cover topics such as the art world’s influence upon the artist, the death of avant-garde in the western world, the relationship between artists and the 1%, and jargon in the academic art world.

Thornton says, ‘chess is a very good metaphor for the games artists have to play in the art world.’ An artist’s image, whether ‘goody-two-shoes’ or ‘enfant terrible’, is of painstaking importance in such a visual domain. In her book, Thornton asks the artists she talks to, ‘what is an artist?’ She and Julien highlight the two responses to this question from Ai Wei Wei, interviewed by Thornton both before and after his incarceration in China. The first time, Ai Wei Wei didn’t have a direct answer. Apparently during his incarceration, he was repeatedly asked the same questions, one of which being ‘what do you do?’ To this he would reply that he was an artist. His interrogators would then mock him by telling him that he was an ‘art worker’, not an artist. After being released, Ai Wei Wei’s outlook had changed, and he had a difficult time coming to terms with what transpired during his confinement.

Ai Wei Wei was also considered in terms of the avant-garde. Although he’s Chinese, Thornton reveals that other Chinese artists she has interviewed consider him as westernized. The idea that the avant-garde is dead in the West brought up the question of its existence in the East, where shock-value is still relatively attainable in art. Thornton herself believes that the two components of avant-garde, politics and aesthetics, have split.

A lot of audience members were curious about the art market pandering to the ‘one-percenters’ who frequent auctions. Thornton informs us that, while the wealthiest are certainly the ones buying art, artists are not necessarily targeting them as the audience of their art.

Speaking of her experience as an academic, and referring to the literary substance of her book, Thornton proclaims that while her writing involves academic levels of research, it is easily readable by the public and not laden down in jargon-heavy phrases that isolate those outside of the art world. Given that her book reads in a smart yet human way with its detail-rich vignettes, I would tend to agree. Although some of her former colleagues found her work a little bit ‘too readable’, her work is admired by the several students in the audience, one of whom became a ‘Thornton fanboy’ during the course of his studies.

In April of this year I went down to Soho’s Society Club for a discussion on alcohol in literature with Granta authors Patrick deWitt and Olivia Laing, an event that attracted a distinctly literary type of crowd. I remember it being packed – the Society Club is smaller than the LRB – and that I was the only one with coffee rather than a ‘proper’ drink. I find that the contrast in audience between the two events is indicative of the range of writing issuing from Granta. Thornton’s talk unsurprisingly attracted art-lovers and people generally more interested in her vast knowledge of the contemporary art scene than in the particular literary merits of her books. When it was my turn to have my copy of 33 Artists signed, Thornton at first pegged me for an art student; it was just that kind of crowd. In this way, I think the diverse subject matter Granta publishes invites an intersectional body of readers to come together: I certainly came for the literature, however I learned a good deal about the contemporary international art scene along the way.