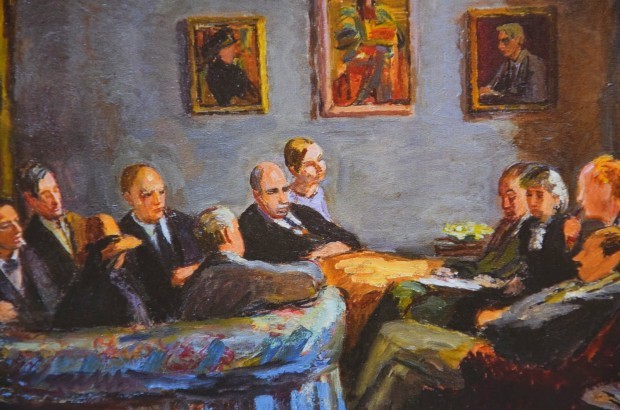 KARINA TUKANOVA reports on the Bloomsbury Festival, taking us behind the front matter of London’s literary district.

Explore Bloomsbury and you will frequently stumble upon blue plaques, denoting that a great writer, philosopher, or scientist once ‘lived here’. Home to so many influential figures throughout history, including Charles Darwin, Karl Marx, and Virginia Woolf, this epicentre of culture has something of interest for everyone.

The annual Bloomsbury Festival, this year conceived around the theme ‘Language’, reflects this interest. Over the festival’s five days, audiences were able to sample the vibrant cultural and intellectual diversity of the area. The line-up of performances was truly impressive, incorporating everything from world-leading institutions and ground-breaking scientists, to prominent artists and creative businesses. However, the theme would not be complete without its companion: Literature. Between The Lines, a pop-up Literature Hub in Goodenough College’s London House, was a highlight for any literature lover. With performances, workshops, panel discussions and lectures given by renowned academics, there was much to excite and inspire.

One of the most notable events was a performance by the students of the Faber Academy. Situated at Bloomsbury House, the Faber Academy runs courses which support both amateur and experienced writers, helping to turn the seeds of good ideas into fully formed oeuvres. Students of the Academy read extracts from novels that they are currently writing under the supervision of award-winning novelist, Gillian Slovo. Each was so well-written that it was hard to believe they were not final drafts. Although authors of the past (think of Lord Byron or Dylan Thomas have helped to establish a parallel between genius and roguishness, it is clear that these students attained such high standards through a commitment to hard work, research, and an adherence to deadlines. Perhaps setting deadlines could help get you working on your next masterpiece?

Between The Lines also hosted a panel discussion entitled How to Get Published. Featuring Noel Murphy, sales and marketing director at Yale University Press, and Juliet Mabey, publisher at Oneworld Publications, the discussion elucidated just what it takes to publish a novel from scratch. Beginning with a wry warning that this is an industry ‘based on relationships’; so try not to harangue your agent, there was also excellent advice about the need to tailor work to meet the demands of future markets. Writers should take note that thanks to recent best-sellers such as Gone Girl, The Girl on the Train, and Dark Matter, psychological thrillers are gaining in popularity; closing in on the market share traditionally held by romantic novels.

Cracking Shakespeare, an engaging and interactive discussion with the actor and artistic director of Flute Theatre, Kelly Hunter, was also a highlight of Between The Lines. Throughout her career, Hunter has worked to improve the accessibility of Shakespeare for a traditionally under-represented audience. Flute Theatre adapts and performs the works of Shakespeare for children with autism. During performances, Hunter and her fellow actors directly engage with small audiences. Children on the autistic spectrum often have difficulties with expression and communication, and Flute Theatre works to help children overcome these difficulties through focusing on Shakespeare’s dramatic characters. In groups of two or three, children might be asked to copy Hamlet’s ‘depressed face’, thus becoming both a member of the audience and an honorary actor. It was also fascinating to learn that focusing on Shakespeare’s iambic pentameter reduces anxiety because it echoes the rhythm of a heartbeat. Reviews of Flute Theatre productions are promising, with parents seeing their children become noticeably calmer and happier in what might otherwise be a difficult social situation. For me, this powerfully exemplifies how literary art has the potential to enact positive and enduring personal and social change.

Between The Lines was as creatively stimulating as the neighbourhood it represented and merits first-hand experience. Mark the dates of next year’s festival in your diary, and for a week you will be stumbling upon as many fantastic literary events as there are literary landmarks in our beloved Bloomsbury.

More information about the festival can be found: here.

Flute Theatre will perform The Tempest at The Orange Tree Theatre on 25 October – 4 November 2016. For more information and to book tickets, click here.