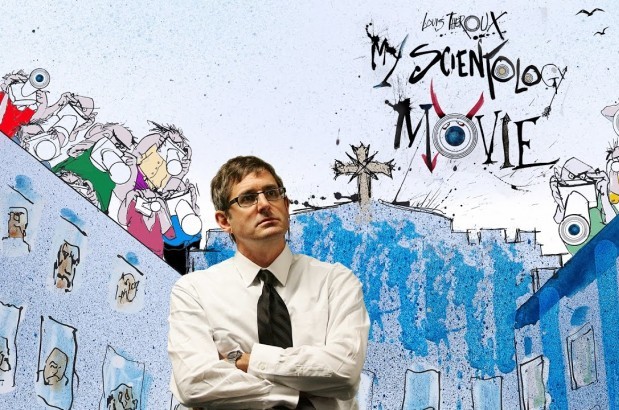 It seems appropriate for Louis Theroux, a man who has unwittingly taken the form of a cult figure in recent years, to investigate one of the largest and most mysterious cults. The Church of Scientology claims to have up to fifteen million followers worldwide, with more adherents than Judaism, yet is only recognised as a religion in sixteen countries. Naturally, it has become a remarkably popular subject for television and film in recent years; Alex Gibney’s feature length Going Clear (2015) notably proved a hit with critics. This rise in popularity, however, has created heavy saturation in the market for Scientology documentaries. Theroux knew he had to do something a little different to avoid being suffocated by the other versions. Fortunately, being a little different is something Theroux excels at.

Whereas Gibney circled and dissected Scientology from the bottom up, Theroux jumps up and down, prodding at every rib of the church in the hope of invoking a reaction. This is a side of him more akin to the Weird Weekend era than any of his recent documentaries. In fact, after the film’s screening at the Southbank Centre on Monday, director John Dower explained that Weird Weekends’ Netflix resurgence inspired the direction of the film. This made for ample comic relief, with Theroux’s unflappable nature providing for some hilarious and frightening moments: a sharp veer away from the more hard-hitting and sober nature of his recent documentaries.

Much of the film centres on the experiences of former Inspector General and self-proclaimed ‘baddest ass dude in scientology’, Marty Rathbun. Now ex-communicated, Rathbun provides Theroux with insight into the inner workings of the church, and direction on how to recreate some key moments of the Church’s history. The concept of these dramatic re-enactments is a first for Theroux, and although an interesting idea, felt somewhat strained. He chooses to show, in detail, the casting process for the recreations, presumably to demonstrate Marty Rathbun’s influence in the process, but also to make the most of his access to someone in the know. The casting of Andrew Perez as the Church’s formidable leader David Miscavige is made a major plot point in the film, yet Perez spent considerably longer playing himself than he did Miscavige. This, along with the substantial amount of time Theroux dedicates to talking about the legal challenges of making the film, makes it occasionally more of a documentary about making a documentary on Scientology.

Theroux is less concerned with Scientology itself than with David Miscavige and his iron-fist rule of the Church. Since he assumed leadership almost thirty years ago, Miscavige has been accused of being financially, physically and mentally abusive to members of the Church. Theroux likens him to ‘a Pope hijacking his own church’. Certain insiders discuss how leaving the Church is similar turning their back on family and friends; one interviewee equates leaving Scientology to ‘a kind of suicide’. The abusive underbelly of the Church is wholly denied by the its senior figures, but the evidence is difficult to ignore.

In the absence of an interview with high profile scientologists or access to members of the Church’s clergy, one of the tools Theroux has at his disposal is his unique blend of charm and dauntless tenacity, provoking reactions from the Church, his interviewees and the audience alike. His mild-mannered assertion is his greatest weapon, allowing him to delight in being what the Church calls a ‘suppressive person’ without resorting to hostility or aggregation. There are very few documentary makers who could release a feature length film with so little access, but Theroux manages it.

‘My Scientology Movie’ premiered in the UK on 7th October, and is on general release at cinemas nationwide. More information can be found here.