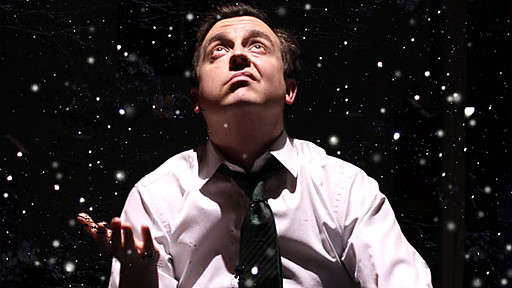 From the title, I expected Christmas cheer and nostalgia which, in a roundabout way, this show delivered when I least expected it. Written by Matthew Bulgo and directed by Kate Wasserberg, this hour-long monologue ensconces the audience into one man’s story, told simply but beautifully by Tom (Sion Pritchard).

Pritchard dresses in an everyman-style: an everyday Welshman, moved to London to pursue his dreams. He waits on the audience as we pile into the theatre and surround his single spot on three sides. The only sign of preparation is a quick drink from a bottle of water—he’s about to talk almost non-stop for 70 minutes.

The play takes place on Christmas Eve with scattered memories recounted from the previous year. There are hints throughout that something dreadful happened last Christmas, which has affected the whole year and left Tom in the state he is in as he travels home alone on Christmas Eve.

Tom is creeping towards thirty and creeping into a crisis: on Christmas Eve Tom’s long-term girlfriend places her hand on her stomach and looks at the dad-to-be expectantly. He freezes. He tells the audience that he realises later he should have said something different but at the time, he simply says “Merry Christmas”. The audience is as disappointed in him as he is in himself.

Tom narrates his story through a mixture of his current thoughts and played out flashbacks of past events, during which we are shown how his dream of making films is being choked by the normality of a desk job.

Many of the processes involved in making films – splitting roles, lighting, camera angles, cut shot, and flashbacks – are all utilised by Tom in telling his own story. He effortlessly takes on other characters, slipping into their personas and plays all the actors in this one-man piece. When he describes his tense departure from his girlfriend, Nat, Tom explains how he sees himself “from the outside, a reverse zoom-dolly” throwing in more technical film language.

One drawback of the production is that the intensity of Tom’s thoughts and narration sometimes makes it hard to tell when he’s saying his thoughts or when something is actually happening. This leeds to disappointment at times, such as when you realise an epic comeback is not been delivered to a peevish co-worker: Tom’s imagined it and then bottled.

Perhaps effecting disappointment is the desired intention however, as it demonstrates how Tom is annoyed in himself for not having the guts to deliver this better line in reality. There is a verisimilitude to Tom’s life that theatre often lacks: he does not have the right words at the right time; he makes mistakes and forgets things and is undeniably human.

Bulgo’s script is intense and funny, and Pritchard instantly gets the audience on his side. He then pushes them away – does the wrong thing, says the wrong words – but we can hear his thoughts and consequently you understand and forgive him.

‘Last Christmas’ is an emotional journey considering family, friend and the true meaning of Christmas in an interesting and highly effective way. ‘Last Christmas’ is on at Soho Theatre until Sunday 22nd December for tickets and more information click here.