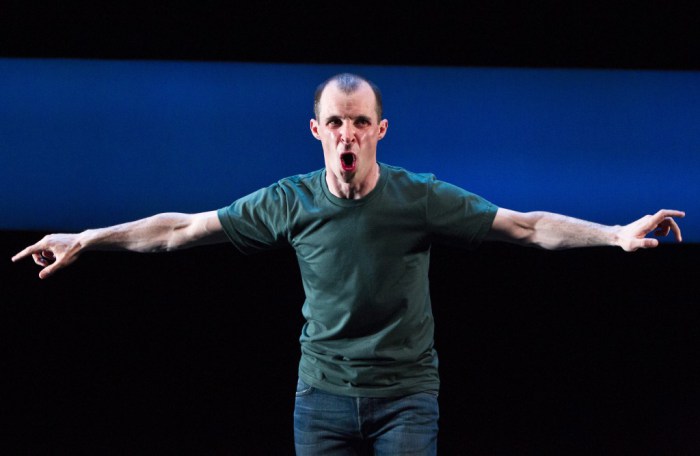 ALASTAIR CURTIS reviews ‘Howie the Rookie’ at the Barbican Theatre

After their lauded London premiere of Enda Walsh’s ‘Ballyturk’ earlier this year at the National Theatre, Landmark Productions strike gold yet again with their revival of this deeply poetic, fiercely propulsive play, ‘Howie the Rookie’. Reckless and depraved but bursting with a dark sense of humour, Mark O’Rowe’s work is an odyssey for modern times, with its white-knuckle, no-holds-barred journey through Dublin’s seedy underworld.

‘Provocative’ is too tame a word to describe O’Rowe’s play. Having premiered at the Bush Theatre in 1999, ‘Howie the Rookie’ is a product of the prodigious wave of ‘In Yer Face Theatre’ – the same taboo-breaking wave responsible for the work of Mark Ravenhill (‘Shopping and F**king’), Sarah Kane (‘Blasted’) and Jez Butterworth (‘Mojo’). And like its contemporaries, this acrid one-man monologue sets out to shock from the off. It is a world where disease, drinking and death are common currency. It is a world invariably sexist, racist and homophobic. And it is also very much a world at war – where competing factions of quick-talking lowlives, adrenaline-junkies and drugged-up criminals engage in cat-and-mouse chases around and about the inner city.

Howie Lee and Rookie Lee are our guides through this underworld. Though sworn enemies, the Lees share the scabrous tongue of IFTA award-winning Tom Vaughan-Lawlor, who changes from Howie to Rookie forty minutes into the play’s duration, and plays both characters with energetic aplomb. Forever prowling about the stage, and always on the look-out for easy money and casual sex, the two Lees together narrate the deadly repercussions of a seemingly trivial conflict, arising from a strain of scabies and the death of some Siamese fighting fish. Fists are wielded, and we hear in grisly detail of noses ripped from faces, people skewered on iron railings, and the body of a child torn in two. Few characters emerge in one piece, and the monologue reaches a bloody conclusion that would outdo the bloodiest Jacobean tragedy.

But ‘Howie the Rookie’ is also an important play about the possibility of change, even in the midst of this ‘world of pain’. Having delegated responsibility for his five-year-old brother, Mousy Lee, to a half-crazed babysitter one day so that he might revenge himself on Rookie, Howie returns at night to find that Mousy has been run over by a car. He blames himself, and runs out distraught into the night. Howie later atones for Mousy’s death and his previous crimes by saving Rookie from not one but two beatings, and by applying medical aid to the wounds he had inflicted earlier on Rookie. Though trivial, these acts are the only acts of kindness in the play, and O’Rowe suggests that even otherwise morally reprehensible characters, like Howie, have the ability to lift themselves up above their nightmarish world. 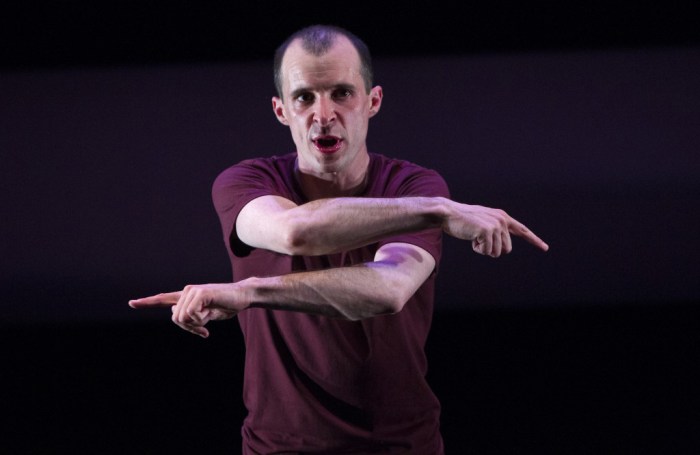 The characters ‘Howie the Rookie’ depicts may seem crude and contemptible at first, but like Howie they are all damaged individuals trying to piece together their lives in the best way they can. We meet a single mother desperate to survive against all odds and give her son an education. We meet unemployed Susan struggling to make ends meet. And even the actions of Avalanche – the burping, 25-stone ski-panted woman who exploits young men at urinals – can be said to illustrate a desperate loneliness.

Throughout all this, Tom Vaughan-Lawlor never falters. Framed by glaring spotlights on the otherwise cavernous Barbican Pit stage, both actor and audience could quite easily get lost in O’Rowe’s challenging play; yet through nothing but rapid spoken word, physical movement and feverish gesticulating, the narrative is deftly conjured. Vaughan-Lawlor animates the space with scenes as lucid as though they are a reality displayed before us. Howie’s madcap car journey through the city in pursuit of Rookie with Flann Dingle and Ginger Boy is infused with adrenaline. The climatic confrontation between the thuggish Ladyboy and Howie and Rookie proves nauseating in Vaughan-Lawlor’s detailed description of the violence. The final moments of the play, where Rookie begins to tell Howie’s parents of their son’s death – thrown from a first-floor window – prove deeply upsetting.

‘Howie the Rookie’ is a refreshing theatrical experience. Though distinctive in its violence and its crude humour, it is the poignant story of Howie Lee’s redemption that lingers.

‘Howie the Rookie’ continues its world tour nextmonth at the BAM Next Wave Festival in New York. Next up at the BarbicanTheatre is the RSC’s productions of ‘Henry IV Part 1’ and ‘Henry IV Part 2’, playing until 24th January. £5 tickets are available for students through the Young Barbican scheme. More information can be found here –https://www.barbican.org.uk/youngbarbican

All images credited to Patrick Redmond