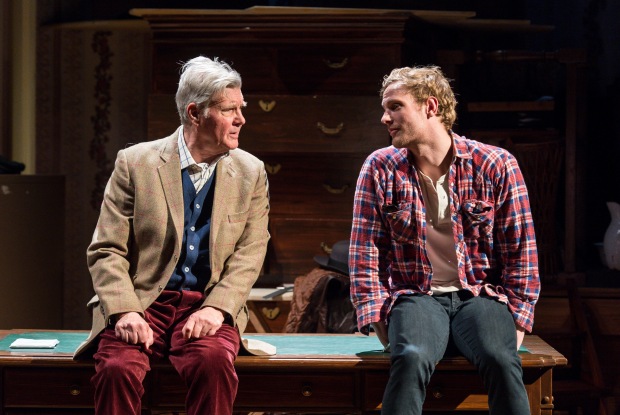 The collected letters of Roger Mortimer to his son Charlie provide the outline for this warm comedy of paternal love, misguided youth, and what it means to be a particular kind of English gentleman. Working as the racing correspondent for The Sunday Times, Mortimer Senior’s famed wit and wordplay as a journalist animate a series of salutary missives to his wayward son. They provide Charlie, and the audience too, with a light education in some traditional ideas of family, discipline, women, and money. However, the congeniality of the humour and the generosity of the satire stop just short of eulogy. The production has an emotional core beyond simple nostalgia. There are a few moments when feeling breaches the characters’ slick surface of wit, and these illuminate the play’s crucial point: there is a dark, compulsive side to ironic posturing, one which, for all its superficial allure, destroys intimacy and jeopardizes connection.

Michael Simpkins’s production dramatizes Roger Mortimer’s letters, which became a bestseller when published in 2012, giving veteran actor James Fox a wide variety of stock roles to play in addition to the guiding narrative voice. Captivating from start to finish, Fox Senior shines brightest in the costume comedy in which he takes on roles ranging from Soho sex worker to an army platoon sergeant. Jack Fox, his 29-year-old son, plays Charlie ‘Lupin’ Mortimer whose wanderings on the continent, problems with drunk and drugs and eventual AIDS diagnosis are compelling to watch, even though his performance is less magnetic than his father’s. At times Charlie is played with a naïve detachment that sits uneasily with his life of self-confessed debauchery. The production strikes a tonal dissonance as the traumas of the past are continually buried under ever more light humour. Jack Fox can do little with the lines relating the progression of his illness because they dismiss any approximation of anxiety with a quick joke.

There are, however, real moments of poignancy. As Roger Mortimer slips away towards the end, there is a pressing sense that not only is this Charlie’s rehearsal of the death of his father, but also a deeply personal rehearsal of what is to come for Jack and James Fox. The father-son bond is placed under intense scrutiny across the entire production, which exposes the great reserves of pain beneath the cool façade of detachment and good judgement. In effect, it is a comedy which is quite ambivalent about its own humour; yet, this ambivalence elevates the play. It is more interesting and touching than it would otherwise be and the closing moments of the play offer a refreshing display of affection: as father and son embrace, the barriers between them broken.

Dear Lupin is playing at the Apollo Theatre until the 19th of September. To book tickets visit http://www.nimaxtheatres.com/apollo-theatre/dear_lupin