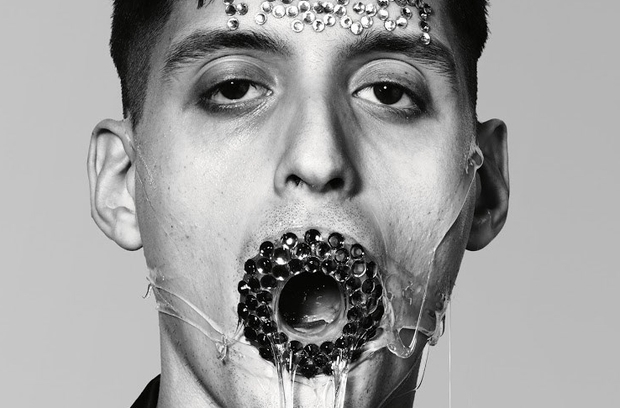 Alejandro Ghersi (a.k.a Arca) has embodied many musical-artistic guises throughout his lengthy and prolific career, morphing fluidly from making synth-pop as a teenager in his native Venezuela as Nuuro to, more recently, experimental hip-hop and electronic records – 2014’s Xen and 2015’s Mutant. He’s already something of a veteran, having worked with Kanye West on Yeezus, as well as producing for artists such as Björk and FKA Twigs before establishing himself as a solo artist. Ghersi is nothing if not consistently inconsistent, his deliberate evolution is traceable, though unpredictable, throughout his work. This, his third studio album under his current name, signals yet another departure from what has come before, with Ghersi’s vocals forming the focal point of the record, while in previous albums they were heavily altered and distorted, if present at all.

This is an album of gloriously brazen queerness. It begins with Ghersi’s plaintive, isolated hum in opening track ‘Piel’ (or ‘skin’), before a deep background bass emerges behind his vocals; immediately you can sense him inhabiting a new identity, shedding an old skin and celebrating a new, more authentic one. A skin that is frank, unapologetic, and accepting of pain. This image, mirrored closely in the music on the record, is most evident in the video for the single ‘Reverie’, a disarmingly graphic piece that sees Ghersi face his sexuality, in all its ugliness and beauty. Throughout Arca, He explores sexuality in its many guises (apparent in his song titles like ‘Urchin’, ‘Castration’, ‘Whip’ and ‘Child’), moving from a melancholic yearning for tenderness and intimacy, towards BDSM (in ‘Whip’), and finally towards frank depictions of love’s violence (lyrics from ‘Desafío’): ‘Love me, bind me, and slit my throat/ Search for me, penetrate me, and devour me.’ This is the highlight of the album. Here, Ghersi is at his most pop-orientated and provides a hook that in no way compromises the power of the track – its relative accessibility within an otherwise challenging album renders it a necessary and exhilarating component, lifting and providing context for the tracks that accompany it. Positioning it towards the end of the album injects the final third with renewed energy and life.

Arca debuts Ghersi’s singing voice; he used his voice on previous albums, but before it was distorted and warped beyond recognition. Here, his voice forms the backbone of the music. His vocals are laid bare and improvised, whilst carrying a haunting quality which, when placed over the top of dramatic bass and organs, gives his piece a fascinating, ecclesiastical tone. They are slow and mostly improvised, exploring dark corners of sound and expression. He chooses to sing in his native Spanish, again affirming his command of his own identity, one that is no longer at odds with itself. On ‘Sin Rumbo’, the mid-point of the album, the vocals and the backing interact and interrupt one another somewhat erratically, whilst Ghersi’s voice soars to an arresting falsetto. Beauty and discord are present throughout the record, the experimental is constantly intertwined with the orthodox. The album is a long hymn praising queerness, discord, and the relationship between the classical and the cutting edge.

The personality of Ghersi’s vocals is integral to this album’s sound. Every breath, hesitation, and splutter is audible, and, while previously he has altered his voice to resemble an instrument, the voice here is unapologetically human; Ghersi has travelled to another artistic extreme, heightening the aspects of the human singing voice that make it fallible and genuine. On ‘Coraje’, his breath trembles and occasionally interrupts the melody as Ghersi pauses to breathe. His emotion is hyperreal and melodramatic, far from the colder, much less personal electronic sound that preceded this album. The lo-fi effect achieved through a croaky whisper of ‘abierto,’ (open) does indeed break his sound open, making it profoundly intimate listening, sometimes uncomfortably so.

This album is a departure from Ghersi’s previous work, yet there is a definite sense that this is a natural progression. This is an artist coming to terms with aspects of his identity – both personal and musical – left otherwise unexplored in his work up to this point. It is worth listening to repeatedly, each revisit revealing new layers and offering sonic curiosities unique to such a genre-defying artist.