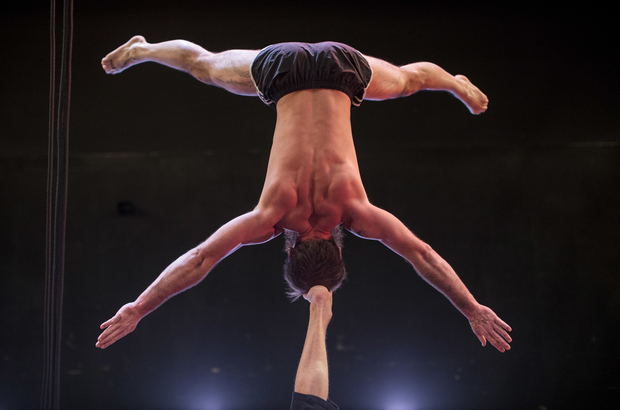 It’s Not Yet Midnight… at the Roundhouse is an ode to human cooperation; a glorious hour-long symphony of movement. The limbs of the twenty-two performers are the orchestra’s strings, and the astonished gasps of the audience, which regularly punctuate the stunts, serve as the percussions. The show is billed as circus, but it’s really equal parts ballet and acrobatics; the dancers seamlessly shift from dancing elegant contemporary sequences, to rising higher than two storey buildings as they assemble into four-tall telegraph poles. Some light relief is provided too by the wordless sketches that separate the performance’s acts, pleasantly contrasting with the angst-inducing stunts.

‘Alone, we run faster; together, we go further’, we are told is the troupe’s philosophy – it is this maxim that clearly underpins the entire performance, and which the medium of delivery channels. As the sometimes apprehensive facial expressions of even these practiced acrobats testifies, the trust required for a slight woman to be delivered into a triple backflip from the combined strength of two burly men is inordinate. If anyone should know about the value of trust and mutual cooperation, it’s these performers, who seem to treat the laws of physics as guidelines.

The opening act, which depicts a brawl between two men that escalates into a stage-wide skirmish, typifies this philosophy. There are no two sides; it is every man for himself as the gymnasts slug it out. But slowly, a cacophony turns into a choreography, and the troupe begins to move as an organic whole. Previously adversarial and spurning shoves appear rather more calculated and consensual; individual limbs and torsos dip and weave into each other, assisting rather than confronting. Chaos becomes order as the individuals form a cohesive collective.

The troupe constantly toys with the viewers, wittily aware of our expectations and unease. ‘Will they do it… surely not’, goes the internal monologue of every unaccustomed spectator – and every time they do, to unceasing audience astonishment and acclaim. The flips grow ever-more numerous; the human towers ever-taller. It’s circus as architecture: bodies form foundations and safety nets, each an indispensable part of the whole. The company is undoubtedly acutely aware of individuality, and does not seek to iron it out, as occasional touching moments of romance highlight, but they are also clear that individualism is never more effective than collaboration.

Surprisingly, for a show with so much vision and coherence, It’s Not Yet Midnight… has no director, and the company does not even allow casting votes on decisions (‘voting only tells you about numbers, not about people’s feelings or the nuances of a situation’). The show’s success feels like a consequence, rather than a side-effect, of this choice. The dancers trust each other and are flawlessly effective in speaking as one, even with not a word uttered until the short message delivered after the show.

Compagnie XY is a French collective, and it’s difficult to read the epilogue delivered by one of the dancers, warning against the values of individualism and competition, as anything but an admonition of Brexit by our continental cousins. This feels like a calculated and unfortunately necessary choice. Theatre, circus, ballet, gymnastics: these are not disciplines in which parochialism is welcome. Compagnie XY makes it clear that their craft relies entirely on openness, sharing, and solidarity, and they’d like the rest of us to hold these values a little more at heart.

It’s Not Yet Midnight… is performing at the Roundhouse until April 23rd.  Find tickets and more information here.