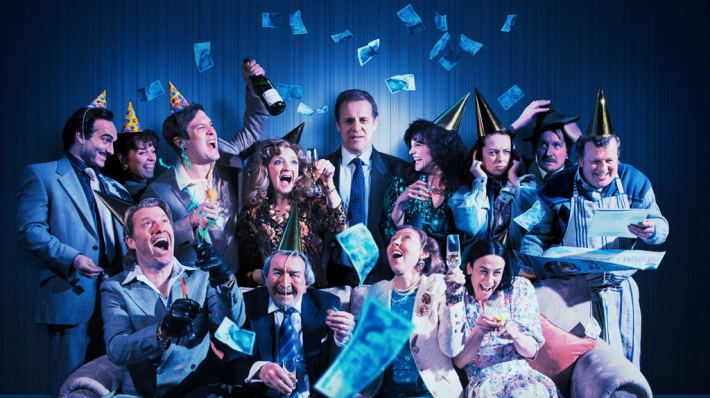 Jack McCracken, a good, honest man, takes the helm of his family business and discovers it to be entirely corrupt. He tries to keep hold of his integrity, but ultimately becomes as corrupt as the business itself and the family members who run it. Sound familiar? Alan Ayckbourn’s A Small Family Business is essentially The Godfather, if The Godfather were a farce set in Thatcherite Britain.

The play premiered in 1987 on the Olivier Stage at the National Theatre, and has been revived on the same stage by director Adam Penford for a 2014 audience. Nigel Lindsay is brilliant as the protagonist, showing perfectly that once you’re on slippery slope from good to bad, there’s no way out. His desire to save the family name when he discovers first that his daughter has been caught shoplifting and second that his entire extended family is involved in a network of illegal racketeering leads him to committing acts just as immoral, if not more so, himself. 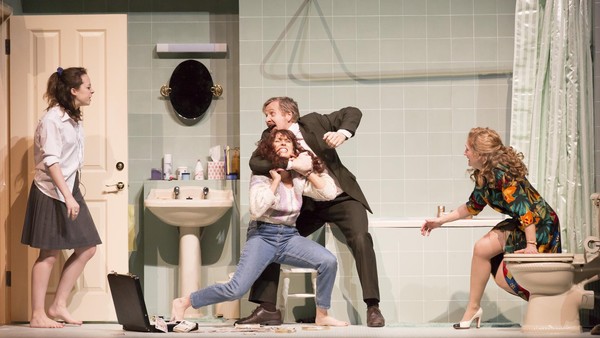 Despite the dark subject matter though, the play is farcical, and Penford strikes the right balance between delivering a serious moral message and making his audience laugh. There are particularly strong comic performances from Niky Wardley and Samuel Taylor, playing the wiley, persuasive, dominatrix sister-in-law Anita and the bumbling, imbecilic son-in-law Roy – these actors, whose characters sit at opposite ends of the ‘smarts’ spectrum, deliver their lines with panache and perfect timing. Michael Cottle, as the lecherous private eye who kick starts Jack’s descent into corruption, is also excellent, capturing the character’s snivelling, unnervingly menacing presence perfectly in his lack of control of his saliva.

Tim Hatley’s unchanging set is an intricately detailed two-level house that serves as the home of each branch of the family. This worked well to convey the idea that they are all the same, each one as bad as the other – even Jack, who considered himself at first to be morally superior. With the set remaining the same however, the recorded music used in some of the scene changes felt unnecessary. The slowing pace sometimes disrupted the building tension, as well as making the first scene change somewhat confusing as to where exactly we were supposed to be.

Adam Penford’s production of A Small Family Business ultimately succeeds in delivering the play’s message about the morality of Thatcherite values without overlooking the farcical elements and becoming too heavy. Watching the protagonist go from a scrupulous, upstanding citizen to fully-blown Godfather (in the final scene, he’s even got Brando-esque slicked back hair) is both a hugely enjoyable and hugely ominous experience – in short, it’s exactly as it’s supposed to be.

PLaying until 27th August, get your tickets HERE