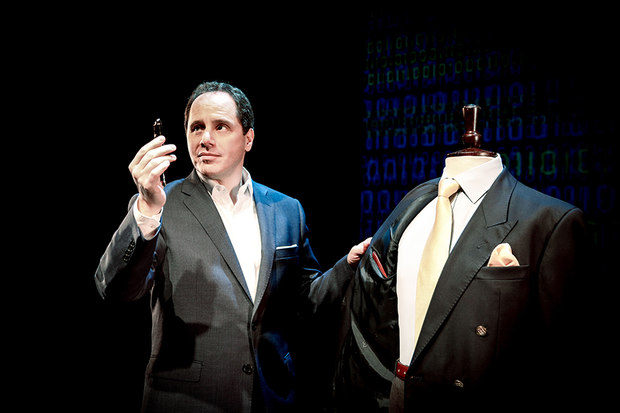 “Honest thief” James Freedman has devoted the last twenty-five years to perfecting the Art of the Steal. “The world’s number one pickpocket” takes to Trafalgar Studios for his one-man show, ‘The Man of Steal’ after a sell out run at the Mernier Chocolate Factory. The show is a lecture turned showcase, combining Freedman’s Fagin-esque sleight of hand, with a demonstration of the how and why of pickpocketing, and how to avoid becoming a “mug”.

‘The Man of Steal’ opens up the world of the professional pickpocket. The staging is simple, with Freedman flanked only by a tailor’s dummy and a safe, as he demonstrates his sneaky, and at times balletic skills of prestidigitation. His light-fingered abilities and misdirection allow him to manipulate the audience and their attentions. This enables him to blur the boundary between audience and performer. By removing this distance, Freedman engineers a degree of trust from the audience which will later be shattered: the collective guards of the audience are let down to their own detriment, and it is from here that he is truly able to demonstrate the ease with which any one of us can become a target.

Despite making virtue of his nondescript appearance and celebrating in his once being described as an “accountant on his night off”, Freedman’s showmanship is far from ordinary. His patter is where he excels, and it is clear that he is a natural performer; at times the production feels more akin to a stand up set rather than a magic show.

The most enjoyable parts of the evening are those where Freedman directly interacts with audience members, with Freedman filching the tie from one’s neck, and the glasses from the pocket of another. His repartee allows for this to be well received; it’s delivered with a broad smile, and of course, the assurance that he is “honest”. This honesty comes with a backstory, where the tone becomes somber, and where the origin of Freedman’s loathing of injustice is revealed. However, very little else of his personal history is remarked upon. Thus the sincerity of this ‘reveal’ is, unfortunately, somewhat undermined.

It is Freedman’s authenticity that holds up the show where it occasionally falters. The more obviously performative elements of ‘The Man of Steal’ occasionally fell flat and jarred with the jovial tone of the show. However, it was the charisma and the stage presence of the ‘finger-smith’ himself that shone through, and he did the seemingly impossible, made identity theft thrilling.

‘Man of Steel’ is showing until 4 July. For tickets and more information click here: http://www.manofstealwestend.com/