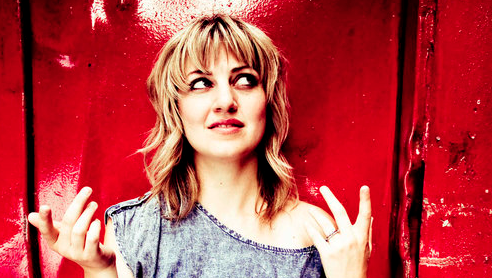 Upon seeing Anaïs Mitchell perform her enchantingly lyrical songs, it’s easy to see why this singer from Vermont has been dubbed the ‘queen of modern folk music’. Mitchell’s music is steeped in myth and magic, and confronts the themes of womanhood, family and America with refreshing honesty and complexity. Her heartfelt and offbeat performance is perfectly complemented by the space in which she performed, a beautiful Victorian church which also operates as a live venue and homeless support centre.

Mitchell is supported by This is the Kit, the musical project of British singer-songwriter Kate Stables, who has recently toured with artists such as The National and Iron & Wine. Tonight Stables plays without her band, performing her disarmingly sweet and ethereal music, reminiscent of Feist or Emily Barker & the Red Clay Halo. She finishes with the delightfully wistful ‘Bashed Out’.

Mitchell opens her set with a song from her newest album, Child Ballads, a collection of old British folk ballads. At the heart of her music is a love of storytelling, exemplified by her phenomenal folk-opera, ‘Hadestown’, a reinterpretation of the Orpheus myth set in a post-apocalyptic depression era America. Hearing elaborate songs such as ‘Why We Build The Wall’ and ‘If It’s True’ stripped down to their bare bones is a reminder of the sheer power of her poetic voice. Mitchell confirms rumours that a full musical theatre production of ‘Hadestown’ is in the works, and plays a new song, ‘Any Way the Wind Blows’, written for the show

She follows up with older fan favourites, such as the simple melancholic love song ‘Old-Fashioned Hat’. Here the immense unaffected beauty of Mitchell’s voice, often compared to Joanna Newsom, becomes apparent. The highlight of the night is when she performs ‘Young Man in America’, a heart-rending lament for the post-recession generation that encapsulates her masterful songwriting.

Mitchell engages the crowd with charming anecdotes on touring with her husband and daughter, taking requests and encouraging fans to sing along. She goes unplugged for ‘Way Down Hadestown’, careening across the stage with typical energy and fervour.

The final song of the night is an understated and soulful rendition of ‘Coventry Carol’, performed a cappella as a duet with Kate Stables. It ends a truly stunning and emotional performance from a talented woman at the peak of her creative power.

This Is The Kit will release their third album later this year. They will be returning to London for a show at the 100 Club in March. Anaïs Mitchell’s solo recording ‘xoa’ is out now.