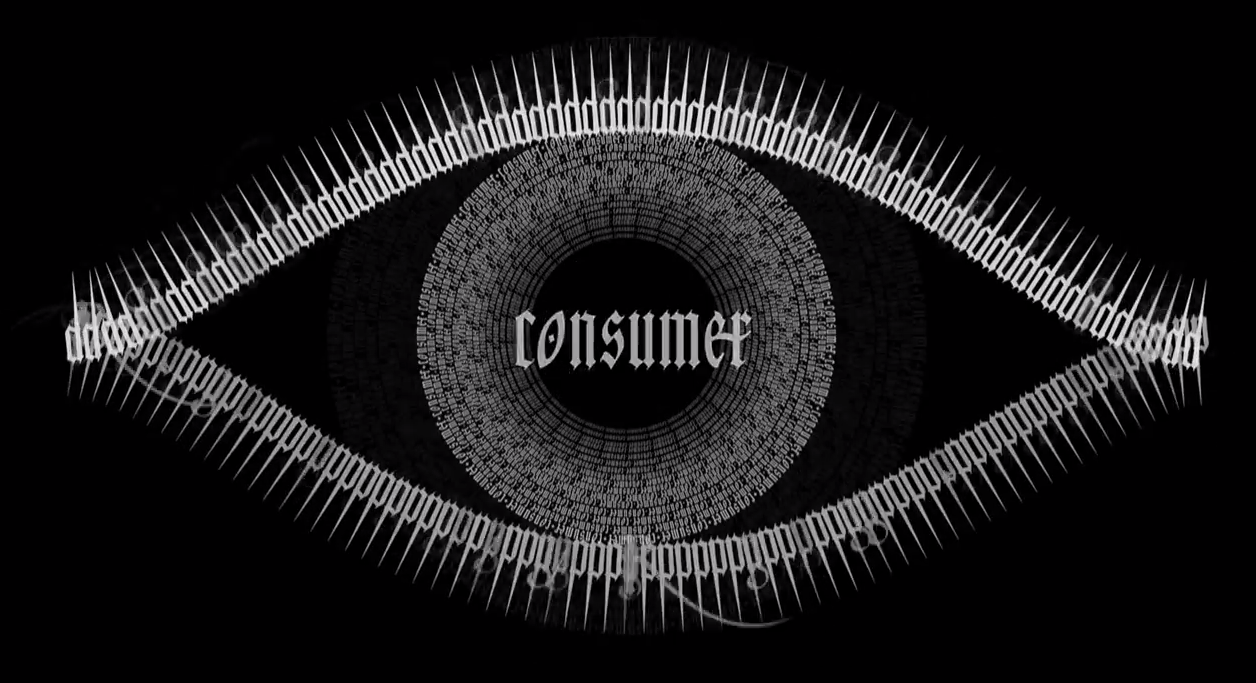 Oliver Harrison’s Apocalypse Rhyme is devastating and beautiful, calmly informing watchers that the apocalypse has preceded it, caused by modernity, and us.

The apocalyptic destination is exploited by blockbuster Hollywood films that depict humanity waiting for – or in the midst of – the end of the world. Harrison ridicules the glamorization of apocalypse and popular media’s literal interpretation of it as a physical death, by revealing that we are existing now in a post-apocalyptic world.

The short film is a kinetic typographical poem, a medium which boasts exciting potential for the development of literature in this technological era. In his poem Harrison utilises an infantilizing technique: he decomposes the word ‘APOCALYPSE’ into a spelling exercise. The implication is that we need to be told plainly, in black and white, of our ignorance of our failings. Words crackle against the background of bells tolling. The word ‘was’ ominously persists throughout the poem. The present is inconsolable. 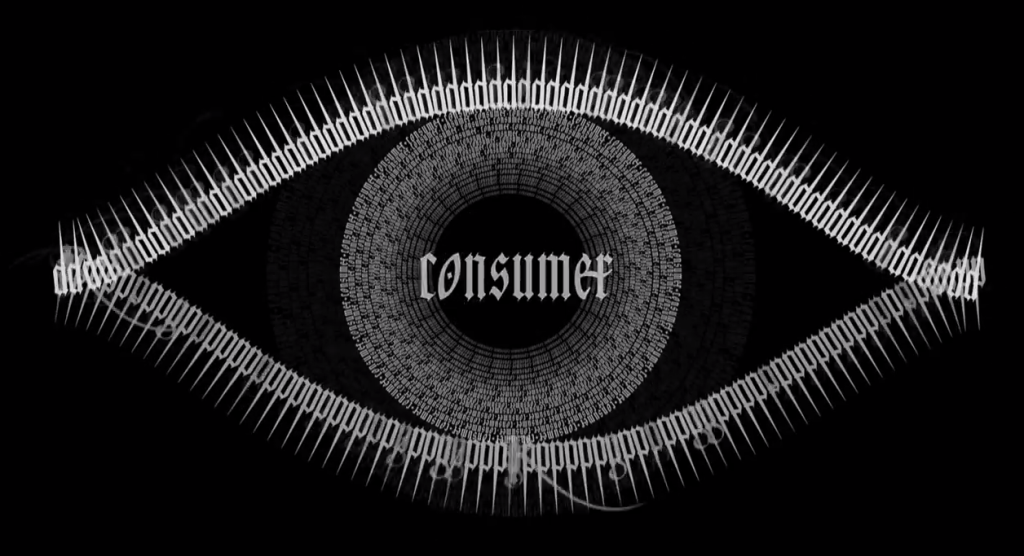 Simply, how did Apocalypse Rhyme come about?

‘The Apocalypse’ was the very loose brief given by Animate Projects and Lupus Films when they commissioned five films from Animators in 2013 for Channel 4’s Random Acts…. No pressure then!

I had watched some of the Random Acts and was seriously underwhelmed (with exceptions). I thought this three minute window on Channel 4 was so precious, I wanted it to have an impact. I wanted the film to be like a boxer, punching the viewer in the face, I really wanted to say what I thought about events.

This kind of typographical poem is rare, do you differentiate between the written poem and film in your mind? Does one precede the other, or is it a combined process of animation and writing?

The Poem came first. The poem is like any other script for a film; the film is only as strong as the script. Although the rhyme is simple in many ways, I spent a long time writing it and perfecting it, I spent so long, I think the production company started getting worried.

I liked using the idea of a rhyme to counter the enormity of the concept of ‘The Apocalypse’. Rhymes have often been associated with world changing events and disasters: “Ring a ring o’ roses”, is a rhyme about the Black Death. It seemed apt to write a rhyme about the ultimate calamity. Rhymes seem to have a chilling child-like way of describing despicable events: “here comes a chopper to chop off your head”. The simplicity of a rhyme lures the listener in and makes serious content more palatable, yet, not any less thought provoking. A rhyme is a verbal Trojan Horse.

The film was animated on After Effects; this was the first time I had used the software apart from a few small special effects. I treated each couplet like a page in a book. These sections were then finally edited and tidied-up in Final Cut Pro. I designed a typeface especially for the film on FonLab Studio. I liked the idea of keeping it black and white, making it more stark and relying on pure graphic composition.

Black humour laces Apocalypse Rhyme, to what extent do you think one must laugh at the state of humanity?

Humour is often the cloaked truth. We are bombarded with calamities, we get a little punch drunk; all those disasters and atrocities on FaceBook. We get compassion fatigue! Humour reinvigorates the arguments. Humanity is a paradox, we are full of good intent, we take everything from the world yet we don’t really give anything back. The first line of each couplet is a statement we would all perhaps accept, a truism! The second line is what is really happening. The humour comes from this comparison. 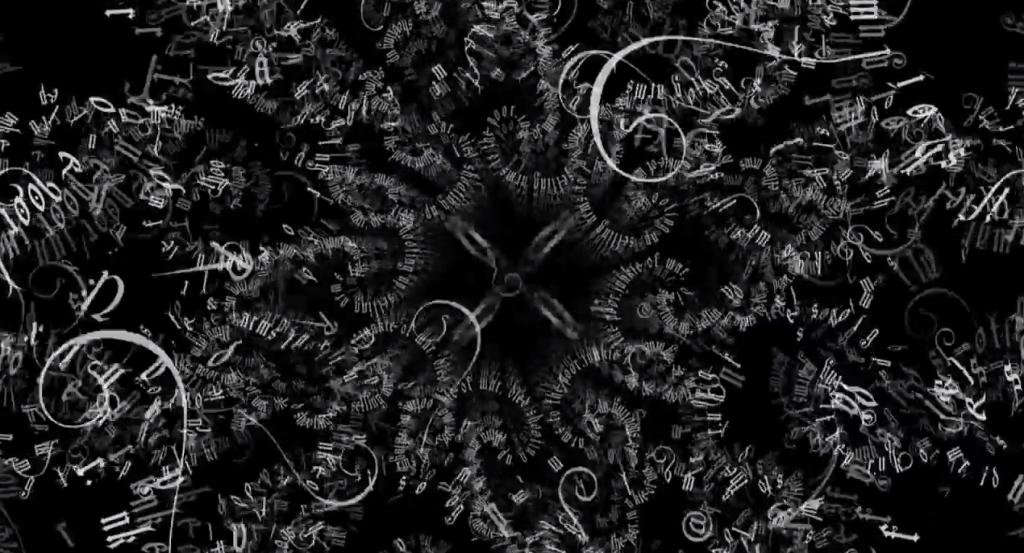 Your film discusses issues such as the cyclic, pervading nature of consumerism. Although the artwork insinuates that we are beyond help, is this your personal belief also? Is there a way out?

The poem originally had a last line of hope, that we should amend our ways etc. It seemed a little crass though. I liked it without a concluding line, It was more abrupt, more shocking – an unanswered question was left hanging in the air. The tense changed from the past-tense to the present-tense “E is for End”. We all expect a positive conclusion but the film version leaves the problem with the viewer.

Due to the internet and social networking, we have a better grip now, on world events. We’re better informed. It is really the first time that we have looked at ourselves (humanity) as a whole, although it can be a little overwhelming. It’s the first time we have taken stock of our misdemeanours. When you begin to dissect the dilemma however, and try to analyse who the culprits of doom are, in many ways, the trail leads back to us, we are all a little responsible. We can see clearly how multi-nationals keep a grip on the economy, yet, ultimately we have control over them, we can vote with our feet. It is a game of ‘scissors, stone, paper’. The good thing is, we are more savvy now, we have been empowered. We can prove atrocities with the camera on a phone and topple governments with a tweet.

Predictions about the apocalypse are frequent. We seem to fixate on the idea that the world is destroyed because of our moral weakness, yet we ignore the actual systematical, insidious, erosion of our world. The idea of the film was to point out this anomaly, this quiet, creeping erosion. A world dying of Alzheimer’s rather than of a quick heart attack!