ALASTAIR CURTIS reviews ‘The Harvest’ at the Soho Theatre.

A forest has taken hold of the Soho Theatre. Branches weigh heavy over the turfed stage and swollen fruit hangs suspended on strings. It’s the last gasp of summer and the harvest is due; under the trees eager hands are at work picking and packing up the fruit in crates. Dizzyingly nimble, the harvesters – two young men and two young women – whip up and down ladders in a silence made crisp by accompanying classical music.

But it’s not just the fruit that is ready to be plucked. Horny and gauche, the harvesters compete for one another’s attention as they pass apples around: looking one another up and down, knocking knees and awkwardly revealing their bare skin. As the former Artistic Director of the Royal Shakespeare Company, Michael Boyd is accustomed to directing a play in which bashful Renaissance lovers pin poetry to trees and pine under the stars. Yet, what a difference it must be to bring Pavel Pryazhko’s foursome of stealthy seducers to the stage. These are characters who are not coy about what they want. Every second word is a double entendre and every gesture a sexual solicitation. You need to use ‘larger nails’ to fit into the crate, Beth Park’s playfully histrionic Ira tells Dafydd Llyr Thomas’s hapless Egor: the innuendo can’t be called clever, but then neither can the flirting. 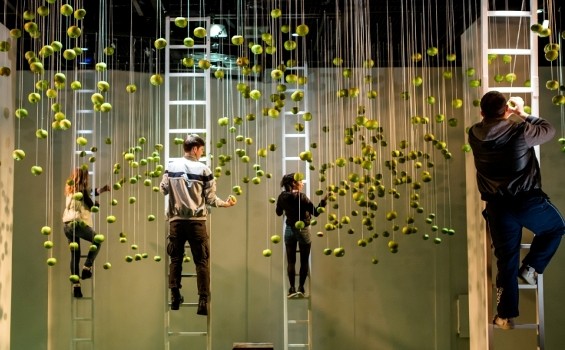 If the women arouse attention then it is the men who fight over it as the orchard becomes a crucible in which tensions fray. Whilst Egor is bumbling and pallid, Dyfan Dwyfor’s macho Valerii has a stern authority that the two women find giddily attractive. They swoon as he exasperatedly explains how the apples should be carefully packaged to prevent bruising. Egor has no such success. Strutting before the knowing Lyuba (Lindsey Campbell), Thomas captures the doleful humour in Egor’s futile puppy-eyed desperation. Pryazhko’s writing bores down to unearth the sexual one-upmanship taking place between the men, swiftly bringing it to the surface when they lock horns for the attention of the women over a crate they must assemble. The work slides, the action over-boils: ‘The Harvest’ approaches hysteria.

Enjoying popularity across the Continent and with a raft of Russian language theatre awards to his name, ‘The Harvest’ is testament to Belarusian Pryazhko’s writing. Though a short play, it remains nigh impossible to second-guess. Subtly and gradually the play’s knockabout comedy is dug out and Pryazhko plants an underlying menace in its place. Valerii attempts to fill the crates but they keep breaking and the apples, treated once with such care, are heedlessly left to roll across Madeleine Girling’s set, bashed and bruised. Although funny the first time, when the crate collapses the fifth, sixth, seventh, eighth time it is less so. Then violence appears on the horizon just as the sun drops beneath it: noses bleed, fingers are sliced, hammers and mallets are swung around the set with abandon. It seems as though someone is going to be pummeled, or a head caved in. Loaded and primed, Chekhov’s gun very nearly fires.

The taut world Pryazhko has so delicately crafted deteriorates on the stage: ladders break, birds attack and characters take shelter underneath the set. The harvesters dance and howl against the approaching night. The play becomes a lumpy, obfuscated metaphor and it is a change that does not quite marry with the earlier witty sexual rivalry: like a branch that’s twisted while growing out from the trunk. It all gets a little messy – the stage and the writing – and would benefit from some pruning.