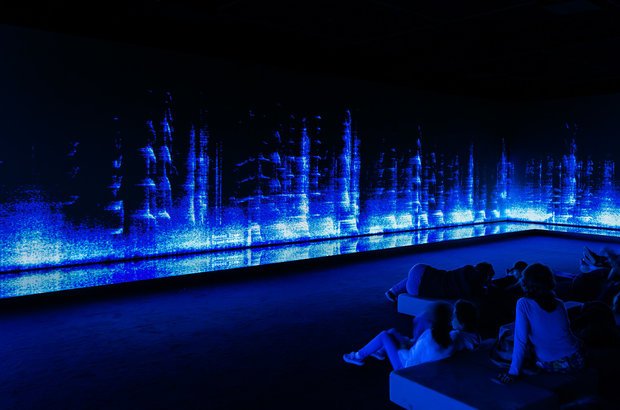 Climate change has come to the fore of the worldwide political agenda. Meanwhile, the art world is also playing its part in raising awareness about such issues. The Victoria and Albert Museum explored this theme with Food: Bigger than the Plate, a playful, yet extremely informative exhibition about changing our relationship with food for the common good. The Royal Academy will follow suit on November 23rd, with the opening of Eco-Visionaries, a collection of architecture, art and design pieces examining some of the most pressing ecological issues of our time.

Third, though certainly not last, is the widely acclaimed Other Spaces exhibition at 180 The Strand, an exploration of light and sound by the London based art collective United Visual Artists. Although composed of three different immersive installations, The Great Animal Orchestra steals the show. This installation, making its premiere in the UK, combines the sound recordings of bio-acoustician Bernie Krause with the graphics of United Visual Artists. While it’s not the first time it’s been exhibited,  the work acquired more and more relevance over the years, as ecological issues increasingly occupy our thoughts and day-to-day lives. Despite its focus on visual effects and immersive sound experiences, the piece delves into a surprisingly tough environmental reality which evokes a feeling of overwhelming concern on the state of our planet, approaching complete deterioration.

Before entering the room, the visitor is presented with panels describing the work of Bernie Krause and his experience as a bio-acoustician. Krause is a sound artist with a distinguished career in electronic music. In 1968, his activity evolved as he founded Wild Sanctuary, an organisation dedicated to the archiving and recording natural soundscapes, which went on to define the discipline of soundscape ecology. For decades, Krause devoted his life to listening to the sounds of nature and trying to transmit their power to the public with his pioneering work. This resulted in the realization of The Great Animal Orchestra in 2014, when he collaborated with composer Richard Blackford and the BBC National Orchestra to combine his recordings with the orchestral textures of a symphonic piece.

Now, at 180 The Strand, this potent composition is transferred onto the visual plane by the spectrograms of United Visual Artists. Lights flow along the walls of the room and completely surround the listener, making the experience feel three-dimensional and immersive. Twelve different visuals for twelve different soundscapes, each twelve minutes long: an all-encompassing journey into the beating heart of nature.

Before walking into the room, even after reading the informative panels, it’s still not clear what one should expect. Krause recorded the voices of trees, grass, monkeys, whales, seagulls, elephants… Will it not all result in a cacophony? Unexpectedly, this is definitely not the case; the visitor is invited to sit down and listen to what the environment is trying to tell them, while being embraced by three-hundred and sixty degrees of colour-changing abstract landscape in tune with the recordings. Every time a new voice comes in, the walls light up with the scientific name of the animal, and the strength of its sound in Hertz.

However, by no means is this a symphonic, soothing orchestral piece: the experience is anything but relaxing. Rather, it is heart-wrenching, overwhelming and painful. Nature is hailing to let its voice be heard, before it is shrouded forever. One can’t help but feel mesmerised as names of animals (and plants) pop up on the surrounding walls, with the voices becoming stronger and more demanding every time. It evokes a feeling of impotence: What am I doing here? How have I not paid attention to this before?

It’s only natural, therefore, that the most shocking and eye-opening part of the experience is the “Before and After”: most of the recordings on offer date back to the 80s and 90s. When put beside more recent ones, the impression given is that of total deterioration. Be it a dead coral reef, or the Amazon Rainforest after deforestation, the exhausted, decayed environment is imploring to be heard.

In the dimly-lit, Matrix-like room, one is compelled to reflect on the vulnerability of these creatures and the irreparable damage they’ve suffered. Unexpectedly, the concrete jungle of the city outside the walls becomes distant, inducing a feeling of profound kindred with a nature too often forgotten and neglected. Yet, at the same time, this primitive bond with the environment surrounding us, in a paradoxical contrast, turns into a positive and proactive push to react, take action, and save what can still be saved. Nature is calling, and we must answer. The acquired awareness that it’s not all lost mitigates the bitter aftertaste and leaves the visitor with a sense of responsibility and new-found hope.

Other Spaces featuring large-scale installations The Great Animal Orchestra, Our Time and Vanishing Point is on until 8th December 2019 at 180 The Strand.