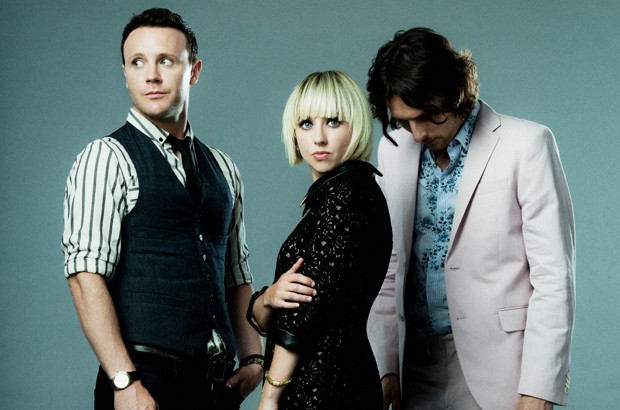 After an astoundingly successful decade of rumbling riffs and plaintive vocals, Mold’s greatest export, The Joy Formidable (TJF) , are back with a two-sided reissue of their celebrated debut EP, A Balloon Called Moaning, consisting of the original release in full and acoustic re-imaginings of the songs in both English and their native Welsh.

The  release harks back to the things that made TJF so successful in the first place, namely their  carefully crafted range of vocals. The Joy Formidable are lucky enough to have more than one brilliant vocalist, with both Ritsy (their lead guitarist and lead singer) and Rhydian (bassist and supporting vocalist) partaking in the intimate dialogues of many of their tracks. The use of both voices is particularly powerful in tracks such as ‘While the Flies’ and ‘9669’, where Rhydian more than competently takes the vocal reigns from Ritsy; moments such as these are really indicative of the brilliance that was on the horizon with their debut album The Big Roar back in 2009/2010, especially with tracks such as ‘Llaw = Wall’. More care has been taken with the vocal mixing on the album, too; Ritsy’s voice is  often put far lower in the mix for the first half of the album, on tracks such as   ‘Whirring’ and ‘Cradle’ so she can really go for it, giving the album a refreshingly confident ‘live’ sound. In the acoustic half of the album, for the most part, the opposite is done, bringing Ritsy’s vocals right up in the mix, allowing her to delicately croon softer than ever before.

With The Joy Formidable being so fervent in their frenetic and feverish rhythms, it is reasonable to be concerned about how they would maintain this hallmark in their acoustic re-workings . However, after even the first listen, it is clear that they’ve masterfully maintained the pulse. The drums in TJF’s tracks are always absorbingly animated, to the extent that they could easily be enjoyed in isolation. Somehow, despite only sporting what sounds like a Cajón and a handful of other miscellaneous  percussion, he maintains this playful allurement. This is most notable in songs such as ‘Crud’and ‘LLym’, both of which could very easily wain a little without a strong pulse, that still pack that trademark TJF punch without the help of a full rock kit. As masterly as Matt proves to be in these new recordings, a lot of the rhythmic interest is thanks to the stellar songwriting at the core of these decade-old songs; both variants of songs such as ‘The Last Drop’, ‘While the Flies’, and ‘Whirring’ each  showcase familiarly rolling and overflowing phrases that are reminiscent of the surging waves depicted on the cover of The Big Roar (upon which many of these tracks also appear).

One of the distinguishing traits of TJF’s music is that, despite the flurry of thunderous drums and bit-crushed bass at its foundation, it feels spacious and light, and this is something that the band have clearly explored in these recordings. A prime example of this is the song ‘The Greatest Light is the Greatest Shade’ and its Welsh counterpart,  ‘ Y Golau Mwyaf yaw’s Cysgod Mwyaf’, both of which boast phenomenal harmonic range. Rhydian’s rumbling and undulating bass lines feel so removed from Ritsy’s intricate lullabying and towering wash of guitar that, despite there being much happening, the track track still manages to feel spacious and enveloping. The band’s successful use of textural contrasts is  preserved in the acoustic side of the release; in the place of said bass lines are fluid, velvety string lines that both warmly fill the bass frequencies and tactfully tie the track together. These strings, alongside the lively assorted percussion, help craft an airiness that becomes so idiosyncratic of their sound in later albums.

An important part of recording this album was for the band to explore their Welsh heritage, with Ritsy mentioning in interview that the band were excited to ‘celebrate the language’. After listening to the Y Falŵn Drom portion of this double-album, it’s evident that the band did just that, and enjoyed it, too. The Welsh language truly is a beautiful one, and TJF showcase this in songs such as ‘Llym’ and ‘Chwyrlio’, where the word order forces lyricists Ritsy and Rhydian to place emphasis on different sections of their already established narratives. In ‘Chwyrlio’ ( Whirring ), there is a strong emphasis on the word ‘anweledig’, meaning invisible. In the English version of the song, this word almost hides in the phrase: ‘You make me sleep so badly invisible friend’. By translating, then, TJF are left with a beautifully enriched set of lyrics for themselves and any other Welsh-English bilinguals to savour. For those who only speak English, however, the magic is by no means lost. The soft fricative sounds of the Welsh language wash over the rest of the song like a streak of watercolour, filling in any nooks and crannies in the soundscape; this ultimately culminates in a truly unique and bewitching musical experience.