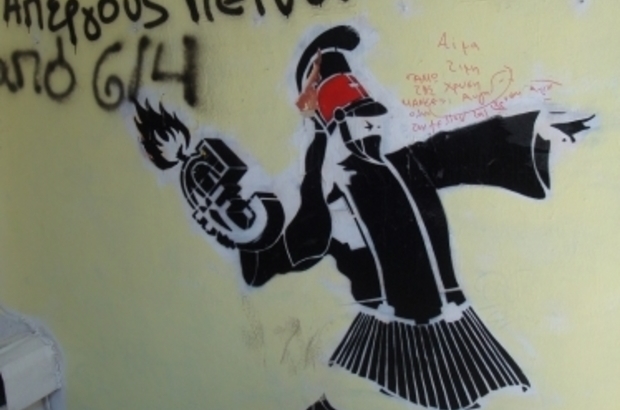 ISSARIYA MORGAN discusses a burgeoning and resistant poetics of austerity in Greece.

On the 5th July 2015, jubilant crowds poured into Syntagma Square in Athens to celebrate what was believed to be an end to the EU-imposed austerity conditions which have caused social stagnation in Greece since the 2008 financial crisis. The celebrations were short lived: just seven days after the prime minister achieved a stunning victory against an autocratic European elite, he officially conceded defeat. Yielding to Europe’s demands, Alexis Tsipras signed off a fresh batch of fiscal austerity measures, plunging the country into an indefinite period of economic hardship.

Twenty months on, Greece is struggling to stay afloat. Yet, against a backdrop of austerity and hardship, a cultural renaissance is blossoming. Karen Van Dyck, professor of modern Greek literature and editor of the poetry anthology Austerity Measures, remarks that despite a shortage of almost everything from food to medicine, there is an abundance of one thing: poetry. ‘In all the misery and mess’, she writes, ‘new poetry is everywhere, too large and too various a body of writing to fit neatly on either side of any ideological rift’. Poets are painting their words on the streets, posting online, joining forces with artists and musicians. Literary magazines, both old and new, are flourishing.

Austerity Measures gathers up various strands of contemporary Greek poetry, weaving them together to form an image of a nation plunged into a crisis of identity. The poets chart the complexities of a modern Greek identities, drawing on themes of time, mythology and geography. The anthology explores what it means to be Greek post-2008, juggling past and present notions of a national self. As the journalist and literary critic Kate Kellaway points out, metamorphosis is a recurring theme, where the body itself becomes the suffering landscape:

‘… and I who feed on memory
like a Cycladic monument…’

I no longer remember her name

Her face perhaps
A precipice, now refugees
Electricity cut off..

To dirty my hands
With the civilization of her body

Down to the innards
Of the clouds

Dimitris Allos – extract from ‘Or Her White Utensils’

In the poetry of Anna Griva, metamorphoses occur between humans and animals, exploring notions of animal bodies as metaphors for human suffering. ‘The Ants’ Lesson’ evokes an empire of ants who are unable to think for themselves. Griva presents us with a bleak portrait of ‘herd mentality’, yet the image is not one without beauty. Despite a collective paralysis of thought, the ants communicate with one another through ‘tangling beautifully’ their antennae, in an act mirroring the ‘winding of music’:

you see them and say

those who forget to think
dance better
a sketch
under the laughter
of bitter desolation.

The poem ends on an ambiguous note: the dance continues in the face of bitter desolation, and those who don’t think dance the better.

Other poems in the collection hone in on the smaller details of daily life, delineating a stark portrait of an austere domestic reality. A focus on desolate interiors underscores the fusion of the personal and the political, where the external seeps into the internal. Dimitris Athinakis paints a melancholy image of the domestic interior as the sole space of stability to survive:

A tidy house is what I have left.

I continue with the corners of the house. I forage in them.
I look under
the beds, under the plates piled
In a semblance of order.
First the deep plates, then the
shallow ones.
I don’t go anywhere – I’m just sad.

Whenever I remember to, I sew some pockets shut
– as if to lock up whatever I can.

Dimitris Athinakis – extract from ‘A Semblance of Order’

Yet it is heartbreakingly clear that any semblance of order here is just an illusion, as the poetic persona knows. Even the haven of the home stagnates with a mood of desolation. As contributing poet Elena Penga remarks in an interview with the Guardian, ‘we are all shaken up and blinded by the shock; we have lost perspective and see no horizon’. Yet fellow poet Thomas Tsalapatis is more optimistic. When asked what gives him hope, he replies:

The work of small groups, the creativity of small artistic cells. The never-ending conversations between a group of friends about art, politics or whatever. And, of course, the help given to refugees from volunteers (Greeks or non-Greeks) and common people every day in Athens and the islands.

Tsalapatis would like to be remembered as ‘a small handmade ark of a feeling and an era’. Few words could better describe Austerity Measures as an anthology. Bringing together the crystallised sentiments of a society and culture beset with difficulties, the collection is a testament to the lived experience of the Greek people; an invaluable insight into the mood of a defining era.

Boiling water, always boiling water
Learning that what is scarce is what takes charge
Learning how Π and T lose their flat roofs
How ζ and ξ dry up at the roots
How vowels get murdered
How language bubbles up

An offering of the silent
For those who grew silent.

Austerity Measures is published by Penguin (2016).