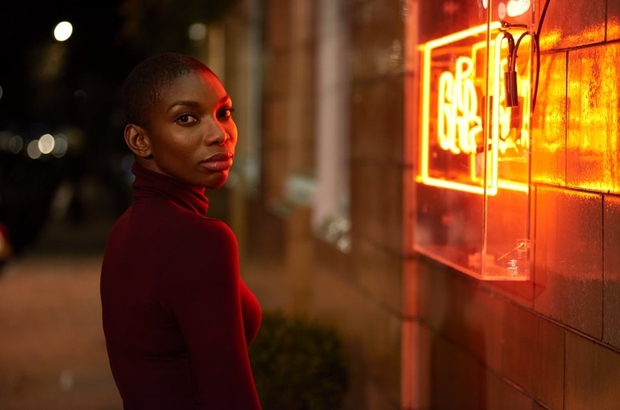 Bold, neon-bathed, and utterly unashamed, Tinge Krishnan’s Been So Long is great big Camden kiss round the chops. A rose-tinted exhibit of London life, the musical follows a budding romance between well-armoured single mother Simone (Michaela Coel) and ex-prisoner Raymond (Arinzé Kene). Set in the heart of the city that has shaped each of their identities, their liaison catches both of them off guard. Fresh and frenetic, the film hums with promise, if not always hitting every note.

Beginning early morning on Camden High Street, with its bustling market-set opening number, Been So Long nails its London settings. To the tangible joy of the audience, local landmarks are carefully utilised so as to engender authenticity rather than cliché. From the corner kebab shop to eclectic-as-ever night buses, these staples of city life are bound to warm the cockles of every north Londoner.

More than a trendy backdrop, the Camden community forms a solid foundation for the plot. The evolving fabric of the landscape perfectly mirrors the way in which characters struggle with the pain of change in the film. They all seem to feel somewhat left out or left behind, held back by responsibilities or the fear of them. From the sad sag of a shuttered pub to the knotted frustration of a man boxed into his teenage bedroom, Krishnan’s tableaux speak loud and clear at times when her characters cannot.

Kaleidoscopically cast in the vibrant hues of the community, every frame of the film pops with colour – from the shimmer of a silver dress to the sputtering neon of a dive bar. Each character is sketched from a palette of their own. Their colours clash, contrast or melt into one another along with the relationships of which they are so evocative. The gorgeous glare of an anamorphic lens infuses the screen with a golden-age tinge of classical cinema, but with an updated re-casting of what and who we’re used to seeing under the spotlight. It imbues a stunningly shot Primrose Hill sunset with every bit as much glamour as is usually bestowed upon Sunset Boulevard.

The emotional heft of the film doubtlessly resonates with a generation forced to renegotiate urban life. That said, it manages to maintain an overwhelmingly ‘feel-good’ tone, which is not dragged down but buoyed up by its irreverent take on these issues. Quick-draw one liners are raucously funny and often unpredictable, bursting the audience open with belly laughs and applause. It’s the razor wit and self-consciousness of the film that give it such idiosyncrasy; for all the enthusiastic comparisons to a certain almost-best-picture Hollywood big beast, Been So Long isn’t quite ‘La La London Land’.  In its more outlandish moments (chip shop confetti and a singing parole phone to name just a couple), a wry spirit of parody undercuts the musical cheese with a knowing wink.

Although there is a smattering of dazzling showbiz moments, the strength of the film lies in its pulling back from total polish. At their most emotional peak, the live-recorded songs are performed with deep breaths, tears and cracking voices. There are plenty of impressive vocals, particularly from leads Michaela Coel and Arinzé Kene, whose superb and subtle performances crackle with tight-angled intimacy. That said, for a film that gets so much just right, it’s a shame that the songs themselves don’t always hit the mark. Some, like Yvonne’s ‘I Want A Fella’, are standout set pieces, but many others are unfortunately forgettable – not least a ‘big finale’ that feels abruptly cut short. Aside from the numbers, the general soundscape of the film is effectively and expressionistically composed; the click of a pool cue or the buzz of a tower block adding delicate shade to the background.

Made on bootstrap budget and adapted from a 2009 Old-Vic-staged play by Che Walker, the film ultimately does a largely brilliant job of breaking new ground. With a non-traditional pre-filming rehearsal process and a cast whose friendships go back decades, the aura of good will surrounding the whole project very much seeps through the screen. The female-led production team and diverse cast, as well as the issues addressed by the narrative, mark it as deeply contemporary and political – without being explicitly flag-waving or tokenistic. Told with warmth, hope, and joy above all, the story of the film is just as uplifting as the story in the film. Been So Long stands as an encouraging light that augurs an electric future for British cinema.

Been So Long premiered at the BFI London Film Festival on Friday 12th October. It is available to watch on Netflix UK.