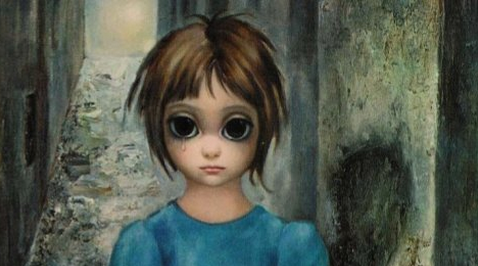 Following the recent release of Tim Burton’s ‘impressive’ Big Eyes, ISABELLA BORNHOLT takes a look at the film and considers its comment upon the place of the art world in the modern age.

Big Eyes has been hailed as Tim Burton’s best film in years. On this project he has shied away from his usual CGI effects, singing, and Halloween-y make up and instead focuses on what is often the basis for great cinema: an incredible, and true, story. Big Eyes tells the story of Margaret Keane, an American artist who painted images of children with huge, soul baring, doe-like eyes. In the 60s, during her work’s fruition, her pieces were sold under the name of her then husband, Walter Keane, until she announced to the world in 1970 that she was the craftsman behind the famous images.

Considered kitsch by art critics, Keane’s paintings were a common fixture in American households of the 60s. The images of her waifs feature often in the film, and formally they leave a lot to be desired other than their cutesy/Tim Burton-esque charm. The handling and colouring are similar to the cheap paintings flogged on Bayswater road, and the characteristic ‘big eyes’ reminiscent of manga comics and the Powerpuff Girls (the animator of which has admitted basing his cartoons on Keane’s waifs). As a painter myself, when I look at the images I feel no envy or curiosity regarding technique or any other painterly aspects. For me these qualities are almost irrelevant; so many 20th century paintings’ interest and prestige have very little to do with the marks made on canvas.

Amy Adams plays a quietly brave Margaret Keane, who walks out on her first husband at the very beginning of the film, long before, as the narrator explains, it ‘became the fashionable thing to do.’ The narrator almost immediately explains how limited a woman’s options were in the early 50s, ‘the 50’s were a grand time- if you were a man’, introducing a theme that has now come to encompass Keane’s paintings: gender politics in the mid-20th century.

Margaret then marries Walter Keane (played by Christoph Waltz, who smashes it as per), a savvy salesman-cum-con-man who is trying to sell tatty paintings of Parisian streets when he notices the interest his wife’s artwork garners. He sells her pieces under his name, and convinces Margaret to play along by saying ‘sadly people don’t buy lady art’. Without Walter Keane the famous big eyed waifs would not be the familiar kitschy images they are today.

An enterprising salesman, Walter embraced the post-war capitalist America he was living in. He used the media to elevate his status; by donating paintings to celebrities and institutions he created great photo opportunities for the papers. His self-generated buzz (words often used to describe $198millon artist Damien Hirst’s popularity) was so effective that people would snatch posters and pamphlets from his gallery if originals were beyond budget. Keane’s solution? Charge them for the posters. Not only did this make him a rich man, it ensured Margaret’s work was available to the masses, and, with a nod to 50s stereotypes, Keane’s vulnerable children were very popular with the housewives of Middle America. Keane was the nuclear family’s Warhol, if you’ll excuse the pun.

Regardless of whether one ‘likes’ Keane’s paintings, or even views them as art at all, does not detract from all that they represent. These paintings are emblems of a story that, in its entirety, encompasses the changes that gender politics, and the art world, underwent during the 20th century. As some of the first artists to capitalise on the mass production of their images, Walter and Margaret set the precedent for many artists to come. They are an early example of 20th century ‘rockstar’ artists, whose personae contribute largely to the popularity of their art, and will have grown even more after the release of this film.

Margaret Keane was a woman who walked out on two controlling husbands, successfully raised a daughter alone, made a living using her talent, and then finally got credit for it. During the artist’s life span, divorce and single parenting has become largely accepted by society. It’s also widely acknowledged that talent has zero to do with gender, and women are now recognised by the art market, although more progress could be made on this front. The film ends with the court case between Margaret and Walter Keane, where the judge orders them to both paint a ‘big-eyes’ in the court room. Walter refuses to do so. The female protagonist triumphs at a craft which, throughout history, has been dominated by the opposite sex. Keane’s images, rejuvenated by this film, symbolise all these developments.

To quote Andy Warhol: ‘I think what Walter Keane has done is just terrific. It has to be good. If it were bad, so many people wouldn’t like it’. Burton’s film seems to accept Warhol’s view, which embraces the hostility towards craftsmanship and artistry. There has been speculation about this common view being for Mike Leigh’s Mr Turner largely being snubbed this awards’ season unlike Big Eyes (Amy Adams has just won a Golden Globe). In a modern world within which we are so obsessed with equality, are we wary of genius and talent? Do we worship the mediocre? Or perhaps the lack of craftsmanship and artistry is really just artistic evolution and we should all move along with the times? Big Eyes brings these questions to mind; rather impressive for a comedy which did not once make me laugh out loud.

If you’d like to check out more from Isabella, you can visit her blog here.