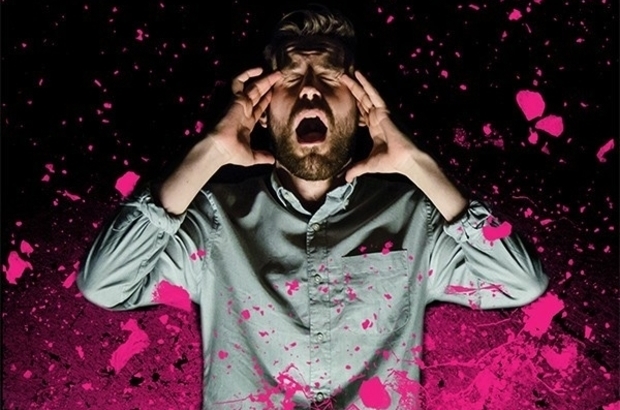 The show follows 5 different stories, a variety that nods to the range of complexities the law has to cover. The two actors and Snuff Box co-founders, Josephine herself and Daniel Foxsmith, adopt multiple roles, allowing for humorous stereotypes and a fast-pace momentum that carries director Ed Stambollouian’s vision. But the small cast also serves to highlight the common connection between the characters: they are all vulnerable to the advances in modern technology running circles around primal human emotions.

The ‘Z Effect’, we are told by one of Foxsmith’s characters, a web-designer, is the theory that if there is no solid conclusion, we keep coming back for more. Explained in the context of app-design, the insightfulness and broader applicability of this notion is almost passed by. His analysis of what makes for a successful app opens the door for BLUSH to discuss the theme of masculine vulnerability in modern relationships, a subject often not given much attention. Both men and women are inflicted by the pressures modern technology puts on the dating world; finding solace with ‘the boys’ after being rejected, Foxsmith’s web-designer also provides us with a highly attuned presentation of the insecurities that feed ‘lad-culture’. As such, the production presents a more nuanced interpretation of stereotypical gender roles in dating. The stereotypical model of male assertiveness and female passivity is impossible to maintain in the modern world. BLUSH explores the primal responses at the root of these stereotypes, concluding that men have more solidarity with each other than with women.

By contrast to this male unity, Josephine’s characters repeatedly exhibit women hanging each other out to dry. By acting this way they are shown to make themselves more vulnerable. Perhaps this stems from the attempt to adapt to a predominantly male working environment? The emotions that all three of Josephine’s women experience in their confrontation with revenge porn leads them to having to take time off from their jobs. Sexuality in the work place appears more destructive for women, but BLUSH stands out for addressing the thin line between being desired and being exploited. The conflict is summarized by Foxsmith’s description of a curious young female colleague: ‘Smart, angry, gorgeous.’ The sexualized description reinforces the idea of a world where women feel that ‘strength’ means command of sexuality. In this society of female ‘liberalization’, romance seems to lose its tenderness. But beyond this, the independence can be more isolating than empowering – all victimised characters end up blaming themselves.

The movement between characters is for the most part beautifully executed, leaving the audience completely grounded in the narrative. Any apparent hiccups in the application of this device worked cleverly to comment on the similarities between reactions; blame, vulnerability and creating façades ran through out all those victimized by revenge porn. The occasional trip during the unglamorous dancing worked further in their favour, reminding us that we were seeing real people – these were ordinary lives being mapped. The simple set made up of camera lighting equipment and red circular carpet reiterated that people soon get out of their depth online. In trying to compete with the false presentations in the media, both celebrity and social, reality can spin out of control.

BLUSH is a perfectly and subtly conceived exploration of an incredibly difficult terrain. The themes it explores will leave a marked impression, but its informalities means you hardly notice how much you are being impressed upon.