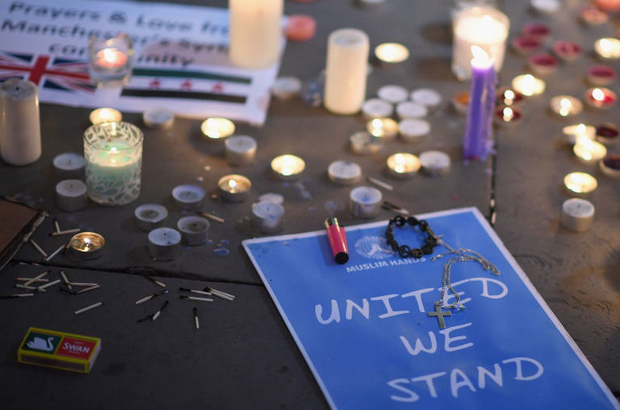 Recently, I listened to Elbow’s 2008 record Seldom Seen Kid for the first time in years. Elbow formed in 1991 in my hometown of Bury, North Manchester, and their music and story have become woven into the town’s very fabric. Seldom Seen Kid is, in my opinion, the most quintessentially Mancunian album since The Stone Roses (1989). It combines the swagger and directness of the Sex Pistols with the gritty, romantic poignancy of The Smiths in a way only a Mancunian band can achieve. But it was the closing track, ‘Friend of Ours’, which stole my heart. The song is about Bryan Glancy, a Bury busker and friend of the band, who died suddenly in 2006. With its soaring strings and piano lead, the track ends with the line ‘Love you, mate’ – the last thing Glancy said to each of the band’s members. Whilst many of us never met him, from this song alone, we find ourselves missing him intensely.

After recent events, we have found ourselves missing many more. Shortly after 10:30pm on Monday 22nd May, 22-year-old Salman Abedi blew himself up in the foyer of Manchester Arena as spectators made their way out of an Ariana Grande concert, killing 22 people and injuring many more. I remember watching the story unravel at my desk, from scare, to terrorist threat, to the confirmed deaths, the majority of them children and teenage girls. I saw videos of rows of ambulances and police tape along the streets I would traverse twice a day, making my way to and from school. Like many of the young fans at this show, my first concert was also at this venue: Radiohead performed there in October 2012, back when it was still the MEN Arena. Despite being safe, and 150 miles away in London, with my family fast asleep in Manchester’s suburbs, it became impossible to distance myself from the events unfolding back home.

Manchester has always been a city defined by its strife. At a vigil the day following the attack, poet Tony Walsh recited the following:

‘…this is a place that has been through some hard times: oppressions, recessions, depressions, and dark times.

And these hard times again…’

It is this ‘Northern grit’ that has always defined Mancunian culture and history. Morrissey opens his autobiography with the bittersweet observation: ‘My childhood is streets upon streets upon streets upon streets. Streets to define you and streets to confine you, with no sign of motorway, freeway, or highway.’ The deafening clanking of machinery from the nearby Quarry Bank Mill and the soot-stained clouds have inspired novels such as Dickens’ Hard Times and Orwell’s The Road to Wigan Pier, helping to piece together the poverty-stricken industrial clamour of the North West. Any L.S. Lowry work presents vast crowds of nineteenth-century commuters, backs hunched and leaning on their walking sticks, wading through thick, choking smog. This figurative smogginess is not something Mancunians try to hide. On the contrary, it is something to bask in. If this culture is in your DNA, what is to be gained from hiding it?

This outlook epitomises the beautiful power of culture: it informs identity. Identity is what brings us together as a unit, and it manifests itself in a plethora of ways. In Manchester, this ‘identity’ is old ladies affectionately calling you ‘chicken’ or ‘duck’; it is following the Premier League, just enough to have something to say to strangers at the pub; it is Piccadilly Records, which has been open since 1978; it is the 5th Avenue night club where, at 4am, after several hours of pushing, shoving, sweat, spilled drinks, and narrowly avoiding being given a black eye by a drunk, steroid-fuelled bastard, everyone joins in a chorus of Oasis’ ‘Don’t Look Back In Anger’, before you find you and your mates on the other side of the city, eating cold chips, watching the sun rise over Castlefield Arena.

It is a homeless man holding a dying woman in his arms; people offering shelter with #RoomForManchester; hotels and taxi drivers around Manchester Arena offering their services for free, for no reason other than the sympathy and good will that come with being part of a community.

Amidst the city’s detrimental drug problem, lonely cranes littering the skyline, and an undying obsession with cold chips, it is easy for me to forget how lucky I am to have been raised in Manchester. It is a city where 1 in 6 people hail from ethnic minorities, where 12 of the 26 MPs are women, and the LGBT community is among the most vibrant in the world. These achievements stem from Manchester’s entrenched cultural ideals; whilst these ideals are not universally shared, I, personally, would not give them up for the world.

Manchester’s crowded music schedule will continue uninterrupted. Broken Social Scene, whose 2002 record You Forgot It in People was a defining album of my teenage years, played at the Albert Hall the evening after the attacks. Manchester is a shining example of what it means to be proud of one’s culture, precisely because of this attitude, defined as it is by ‘coal, cotton, canal’. If we have learnt anything from this attack, it is that ‘culture’ transcends music and film, literature and architecture. Culture is an amalgamation of occurrences, history, and people that have contributed to our identity. If identity truly is what brings people together, then the events of the 22nd have shown that culture is more essential than ever.

On a more tangible level, ‘identity’ manifests itself in community. Until I sat down to write this article, it was difficult to see how a city of 2.55 million people could be ‘tight-knit’. This is what makes Elbow’s record so pertinent. I missed Bryan Glancy even when he was a stranger to me, albeit a stranger who incidentally became the inspiration for an incredibly thought-provoking song. Yet I never realised that he went to King David Junior School, leaving 27 years before I would join as a bright-eyed seven-year-old. I never realised that he was buried at the Jewish Cemetery in Failsworth, where both of my great-grandparents are buried too. These revelations have begun to reveal the true inner fabric of the city of Manchester: millions of connections between millions of people who have never met, but are grouped under the overriding label of a Mancunian identity. With this in their arsenal, a tragedy like Monday’s terror attack will only aid in creating tighter, stronger connections, until the people who strive to destroy them cease to exist.