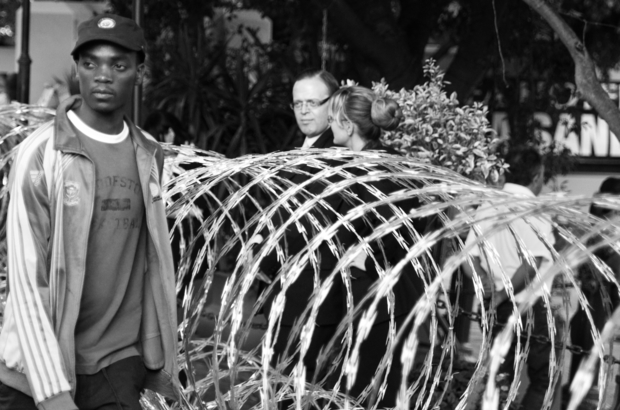 ‘We shall build the society in which all South Africans, both black and white, will be able to walk tall, without any fear in their hearts, assured of their inalienable right to human dignity–a rainbow nation at peace with itself and the world.’

Twenty-two years ago the apartheid ended, and those words rang out across the globe as Nelson Mandela won the first South African general election in which citizens of all races were allowed to take part. As we approach the third anniversary of Mandela’s death, twenty seconds of video footage have gone viral worldwide. The footage shows two white Afrikaners forcing a black man into a coffin and threatening to set it alight. Prior to the filming, the victim Victor Mlotshwa alleges to have been kidnapped, tied up for hours, and beaten. Social media in South Africa has since risen up to declare that #RacismMustFall, but it is clear that Mandela’s dream of a society without fear is far from being realised. In her new book, Bridge Over Blood River, Kajsa Norman traces the cultural identity of the Afrikaners through history; discovering in South Africa’s current climate of fear a troubling revival of the impulse to segregate.

Before her book launch at Waterstones Trafalgar Square last week, I managed to grab an interview with Kajsa Norman. Swedish-born, now living in Hammersmith, Norman is an investigative journalist whose interest in conflict zones has seen her publish works on Cuba, Zimbabwe and Venezuela. When I ask what drew Norman to writing about the Afrikaners, she replies, ‘I wanted to find out how you become a person that wants to see your country fail’. Although the majority of Afrikaners embrace the new South Africa, during her two years in the country Norman discovered a subsection who were planning their escape. From the mass emigration of white commercial farmers, to organisations like the Suidlanders whose fears of revolution have spawned strategies for emergency evacuation, there is a growing desire among Afrikaners to move ‘somewhere over the rainbow’.

For those who remain, Norman describes a wide-scale hunkering down and mounting separatism. In cities like Johannesburg, ‘tall walls and electric fences have turned the homes of the middle class into fortresses’. In rural areas, most Afrikaners have dogs ‘for protection’, and store extra fuel and boxes of canned food in their garage. In a country with one of the world’s highest crime rates, where 20,000 murders take place each year, the influence of fear cannot be underestimated. Fear was the defence used by the sprint runner, Oscar Pistorius, who claimed he mistook his girlfriend for an intruder when he fatally shot her in 2013; and such fear is bred when experiences of violence become commonplace. In Bridge Over Blood River, Norman recounts an interview with Manie Opperman, who had ‘had twelve attacks on his own immediate family, including one murder’. Norman assures me that Manie’s case is not unusual.

Creeping isolationism is the reaction to this violence and fear. The most extreme example in the book is Orania: far from civilisation in the arid Karoo region of the Northern Cape, Orania is a 1000-strong Afrikaners only town, with its own legal framework, currency and flag. Founded in 1991 on the concept of self-reliance, officials tell Norman that Orania counteracts the idea of ‘kafferwork’; an offensive term meaning ‘low-skilled work done by black people’. However, Norman’s description of the town bears shocking resemblance to the segregated suburbs which preceded apartheid. Suburbs were created in the 1930s as a way to ‘protect’ uneducated, impoverished Afrikaners from the racial integration that was deemed to be dragging them down. A resident of Orania interviewed by the BBC said that ‘the best thing about Orania is the freedom’, but this is not a freedom to but a freedom from: a ‘protection’ as the suburbs were; from the crime and the fear of new South Africa, but also from the integration.

Orania’s President, Carel Boshoff, asserts that ‘this is not just about race’. With national legislation like Affirmative Action prompting the journalist, Rian Malan, to write that the Afrikaner is ‘heading towards irrelevance’, Norman tells me that Orania’s elite see the town as a place where Afrikaners can ‘preserve their culture’. ‘There were once over twenty institutions of higher learning in South Africa which taught in Afrikaans’, Norman says; ‘now there is only one’. The book traces the Afrikaner identity back to the Battle of Blood River on 16 December 1838, where 470 Afrikaners fought and won against an army of thousands of Zulu warriors. ‘They did not lose a single man’, Norman tells me, ‘and it is because of this that the Afrikaners saw themselves as a ‘chosen people’’. This myth-making laid the foundation of Afrikaner power and violence under apartheid. Today, their shared sense of powerlessness breeds a new violence, such as that exacted upon Victor Mlotshwa as he was forced into a coffin. While Norman professes no precognition, she admits that she is ‘not optimistic’ about the immediate future of this rainbow nation.

In the preface to Bridge Over Blood River, Kajsa Norman notes that ‘sometimes it takes a perceived threat for a society to articulate its narrative and its values’. With the case of South Africa and the Afrikaner, Norman believes that this story is relevant for multicultural societies the world over. In a year which has witnessed the rapid growth of nationalist movements globally, there are elements of the Afrikaner’s dilemma from which we can all learn. Modernity demands that individual and communal identity change, radically and repeatedly, and in the history of the Afrikaner, Norman presents the different ways in which we can rise to meet this demand. Blending historical context, interview, and anecdote, Norman’s work is as accessible as it is enlightening. As an in-depth investigation of the Afrikaner people, Bridge Over Blood River provides insights into South Africa’s socio-political environment which translate onto a global stage.