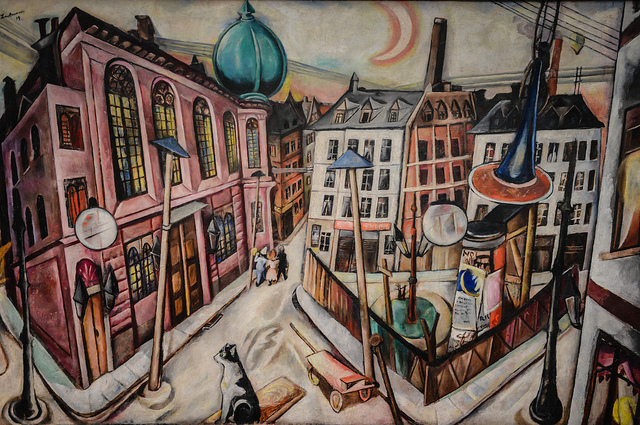 A must-read for cinephiles, JOE JACKSON takes an in-depth look at Weimar Cinema and warns against the broad strokes of generic classification. CONTAINS SPOILERS.

On November 1st 1895, two apprentice glass-painters held a public film screening that predated the Parisian premier of the Lumière brothers’ Cinematographe.  Although the event at Berlin’s Wintergarten Music Hall should have forever cemented the Skladanowsky brothers at the heart of filmic history, the Bioskop was overshadowed by its French counterpart, a device whose creation was significantly aided by the financial-backing and apposite resources of the Lumière family’s photography firm.  Somewhat unjustly, for one hundred and ten years the cinematic scorecard has read: Wealthy French Businessmen: 1 – Ancestors of Impoverished Polish Immigrants: 0.

In a similar way that the achievements of the Skladanowsky brothers are overlooked by cultural historians, the diversity of Weimar Germany’s cinematic achievements has been largely ignored as a result of a common critical misapprehension.  From chapters in study guides to the blogs of purported cinema experts, the majority of early German films tend to be labelled ‘Expressionistic’, as though every film from the period conveniently incorporates or is an example of German Expressionism.  Expressionism was one of the most influential art movements in German history, but popular criticism’s tendency to reduce the products of this diverse period of cinema to entirely Expressionistic forms does both the artistic and filmic output of Weimar Germany a gross disservice; by ignoring the nuances which define and distinguish two disparate cultural phenomena, their merits are inherently diminished.  In the name of Fritz Lang’s monocle, I am hoping that a (scandalously) brief overview of some films of the period – highlighting the overlaps and distinctions between German Expressionism and Weimar Cinema – provides a little insight into the mechanics of the selected works and, in turn, discourages the misapplication of the term Expressionist without undermining the art movement’s inherent worth within Germany’s broader cultural framework.

So let’s start with the root of the problem: Robert Wiene’s The Cabinet of Dr Caligari (1920), one of very few genuinely Expressionistic productions.  Interbellum experts, ardent cinephiles and really, really edgy Arts students (hello) are aware of this iconic example of silent cinema: Cesare the Somnambulist is manipulated by the mysterious Dr Caligari into kidnapping the perpetually-dazed Jane, wreaking havoc in the ghostly town of Holstenwall (named after a breed of black-and-white cow, curiously echoing the film’s thematic and visual chiaroscuro of light and darkness).  The film is given its distinctly Expressionist quality by a sharp-angled set design which, in creating a threating, abnormal landscape, mimics the tension between the mentally-unstable narrator and the environment as he perceives it.  When the denouement reveals that Francis, inmate of an asylum, has fabricated the film’s entire temporal sequence, the jagged points and distorted angles of Holstenwall’s architecture dissolve into the soft, curved shapes of the asylum’s doorways and passages, replacing Francis’s eerie nightmare with a serener world as the film moves from the protagonist’s mind to the reality of an external universe.  As demonstrated by Max Beckmann’s Synagogue (1919), the depiction of abnormal, angular architecture is not uncommon in Expressionist artwork.  Art critic Sarah Lawler explains that the Expressionist aesthetics of distorted pictorial forms and contorted perspectives “express [the artists’] innermost feelings rather than representing the external world”. This punctuates cinematographer Hermann Warm’s use of jagged scenery as a representation of the protagonist’s psychological anxiety, as opposed to his portraying a provincial German community ‘realistically’ and ignoring the protagonist’s precarious mental state.  Through the film’s accumulative mis en scene, the disturbed Francis navigates a setting that literally slices into the screen’s space, engendering a sense of environmental hostility which feels, to the viewer, as vividly representative of an external reality as it does to Francis, until the revelation at the film’s infamous twist ending elucidates that this perception is fictitious and therefore the symbolically-erratic projection of a deluded mental patient’s mind.

There is little room for dispute: the setting of The Cabinet of Dr Caligari is explicitly Expressionistic.  However, the film’s iconic status (the result of: a] the timing of the production, released in 1920 when Weimar cinema was finding its feet, and b] its vividly Expressionistic, and therefore distinctive, cinematography) has meant that many films produced by Germany after 1920 are tarnished by the same brush.  The Cabinet seems to have infected the critical landscape of early German cinema as emphatically as the plagues that ravish the alchemist’s village in Faust (1926) or Hutter’s Wisborg in Nosferatu (1920); films of the pre-colour German era have been reduced to one-dimensional ventures by the improper use of the Expressionist label when, instead, we should be applauding their nuances and niches.

Paul Leni’s Waxworks (1924) briefly exhibits Expressionistic qualities.  Near the film’s dramatic conclusion, the animated wax figure of Spring-Heeled Jack chases the poet-narrator through the museum.  Like Francis’s hallucinations, the threat of this ghoulish force is a mental fabrication: in the poet’s case, it is a self-induced by-product of his late-night writing which disappears as soon as the character rouses from his slumber.  During the dream sequence, cinematographer Herman Lerski overlaps projections of Ferris wheels and fairground rides to create sharp angles and unsettling imagery as a means of communicating the poet’s weary and therefore deteriorating mental state as he begins to fantasise about his work.  Waxworks is composed of three main sections for three historical figures – Harun Al Rashid, Ivan the Terrible and Spring-Heeled Jack – and runs for an hour and twenty-three minutes.  However, the section depicting the London night-stalker lasts for merely six minutes, and the Expressionist features of this sequence only four of those.  Jumping from contemporaneous Germany to eighth century Baghdad and eighteenth century Russia, the film is an amalgamation of historical realism, fantasy adventure and Weimar horror: to reduce the film to an entirely Expressionist feature is to grossly misinterpret and largely ignore Paul Leni’s artistic endeavours.

The pillar of Weimar cinema is the silent horror film.  This genre is indebted to two elements of Gothic Romanticism – the supernatural and the uncanny – which are commonly misattributed to the Expressionist mode.  The shadows of Nosferatu’s abnormally long nails against horrified Ellen’s breast, and  the demonic grin and glowing eyes of the newly summoned Mephisto that cause Faust to wince, writhe and panic, illustrate that F.W. Murnau uses the fears inspired by the physical appearances of iconic supernatural figures of Gothic-Romantic heritage – Mary Shelley’s monster, Victor Hugo’s hunchback, Bram Stoker’s vampire – and not the unsettling, emotional, distinctly monster-less features of the Expressionist movement.  In fact, the dark marshlands of Faust are explicitly reminiscent of Caspar David Freidrich’s The Abbey in the Oakwood and Man and Woman Contemplating the Moon, two iconic works of Romantic art that flirt with the Gothic.

Murnau’s The Last Laugh (1924) is an emotive ‘kammerspielfilm’ commended for its innovative application of an unrestrained mobile camera in order to attain what the director describes as “a simplicity and finality of the technical process”.  This pursuit of simplicity contradicts the Expressionist aesthetic of distorted visual formation, yet the film is often described as an archetypal Expressionist film.  Similarly, Fritz Lang’s films have been cited as epitomising the movement, yet the proto-noir murder mystery M (1931) and the dystopian sci-fi Metropolis (1927) are completely void of Expressionistic features.  Filmic works that categorically confute Expressionist aesthetics have been misperceived as paragons of the movement, which emphasises the severity of the critical misapprehension that has plagued Weimar cinema since its embryonic stages as a field of study.

The first major scholarly works that explored German cinema frequently misused the term ‘Expressionist’; thus, films released in the country from around 1920 to 1933 have been haunted by a misunderstanding that, frustratingly, is shared as fact.  Siegfried Kracauer’s From Caligari to Hitler (1947) and Lotte Eisner’s The Haunted Cinema (1952) were vital in establishing early German cinema as a cultural phenomenon worthy of academic pursuit: according to Kevin Jackson, Nosferatu’s reputation had “more or less dissolved” until Kracauer’s study reignited critical interest in the film.  However, in the words of formidable Weimar film scholar Dietrich Scheunemann, From Caligari to Hitler and The Haunted Cinema, “although still recognised as the authoritative sources on their subject, do not tell the whole story of Weimar cinema.”   Expressionism influenced a select amount of early German films, yet the Gothic spaces of The Student of Prague, the Semitic heritage of The Golem and the technological dystopia of Metropolis owe as much to German Expressionism as the cinematography of Bend it like Beckham is indebted to Norwegian Romantic Nationalism, the CGI of Madagascar: Escape 2 Africa to Neo-Classicism or the cartoons of Beavis and Butthead Do America to Suerat, Signac and the Pointillists.  Moreover, Weimar films manage to pervade an essence that is ‘expressively German’ without Ernst Ludwig Kirchner’s vibrant colours or Emil Nolde’s emphatic brushwork.  Smite the vampires, clean out the Cabinets, check out some Weimar films for yourself: just please, please, please do not label everything you watch as Expressionistic.  Cesare knows where you live, Nosferatu is feeling peckish and my strongly-worded emails take no prisoners.