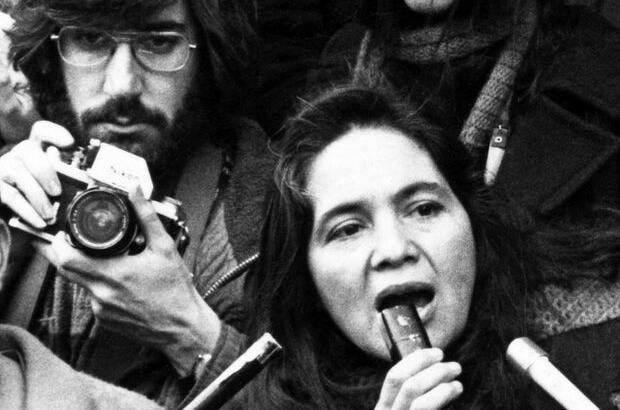 Dolores Huerta worked alongside Cesar Chavez, co-founding the labour union United Farm Workers (also known as the Farmworkers Union) and co-leading the Delano Grape Strike in 1965, which successfully led to the first collective-bargaining agreement between grape growers and farm workers in California. It was a success that had a massively positive impact on the living and working conditions of farm workers who had previously been exploited, treated with contempt and disrespect, and whose health had suffered as a result of unsafe pesticide use and harsh working conditions. Despite dedicating her life to the cause, Dolores’ rightful place in history has been undermined publicly; in February 2010 Tom Horne, then serving as Arizona Superintendent of Public Instruction, wrote her off as a ‘former-girlfriend’ of Cesar Chavez, with another lawmaker referring to her as Cesar’s ‘side-kick’. In her own right Dolores Huerta is an inspiration, and she should be remembered independently of Cesar as well an as an equal to him. The newly released documentary Dolores, directed by Peter Bratt, powerfully corrects the obvious attempt to write her out of history.

From the documentary, the thing that struck me the most is your love of others. You have spent your whole life working to improve the living and working conditions of farmworkers, it took a lot of sacrifice and dedication. Where do you think this love of others really comes from?

So I think it really comes from knowing that once you have a skill, which I was very fortunate to get that skill of organising, you have to help other people that need your help and basically as my mother often taught me growing up is that you do not have to wait for them to ask you. If you see someone in need and you are someone that can help them, you have a moral obligation to help them.

Certainly, but when was it that you really started getting involved as an activist? You said in the documentary that when you were younger you wanted to be a dancer, so what was really behind this shift in your ambition?

I think I was actually always kind of an activist all my life because I was a girl scout for ten years of my life, from the time I was eight to the time I was eighteen, and then I belonged to social clubs, but none of the organisations that I belonged to attempted to make any change in policy. So when I found out that you could actually change policy and make improvements by getting people together and taking direct action, meaning non-violent action, I thought wooaah – this is really the secret weapon. That you can actually make policy changes, and so I guess really, I was enamoured by the idea that people could actually do this, just ordinary common people. You didn’t have to be a public official, you didn’t have to be anybody famous- poor people can really do this if they just come together.

What do you think are the strategies that are behind the success of your campaigns, from the United Farm Workers to the Dolores Huerta Foundation?

You could say that we owe our success to community organising. We really convince people that they do have power and that they don’t need anything else but their own person, they have to come together and with other people to make positive changes. The important thing is that many people don’t feel empowered, they feel that there is nothing that they can do about their life, their situation, and so that is the main thing. In teaching them how to come together, how to make plans and implement those plans, how to volunteer. The main thing is getting people to overcome their fear, because many people just don’t feel that they have a voice or that they can do anything- that they can stand up in front of a city council or a commission or a supervisor. That’s the main thing, getting people to choose the social changes they need to see for themselves and for others.

Fear is certainly an important factor and I think something that comes out perfectly in the movie is the bravery that you showed in the face of real danger during the Delano Grape Strike. How did you do it?

Well you just don’t think about it, you just have to do it, and I think that everybody has their own personal issues in their life but if you go out, and you help other people, your own personal issues become diminished. They don’t overwhelm you or take over your life. They are still there but they don’t become the driving force of your life. If you’re out there helping other people, that makes a tremendous amount of difference for your psychology for the way that you live and the way that you work, also because then you know that you are part of the bigger picture; you can make changes for the good and you know that you have the power to do that. That’s why I find it so liberating to do this kind of work.

The documentary certainly shows a backlash against you as a strong female leader, but it seems to have been more personal than based on your ideology, do you feel that is the case?

There was certainly a backlash from other male leaders of the organisation, they were always trying to undermine me in the work that I was doing, or they would try to take credit for my work (she laughs). Once I had to correct the President who made this glowing report about the work that he had done in New York and after he’d finished I spoke after him and said, ‘I’d just like to correct the record here, this report was on the work that I did’. He was very embarrassed.

But, the farmworkers themselves, they supported me because I was there from the very beginning of the organising, I was the negotiator and I was the lobbyist for the organisation, so they were very very supportive of me and my work. To this day, even though I’m not with the Farmworkers Union anymore, when I meet farmworkers or the children of farmworkers, and of course a lot of the work we are doing right now (through the Dolores Huerta Foundation) is still in the farmworker communities, there’s a lot of respect because of the work I did back then and the work that I’m doing right now.

There’s been backlash from political figures, the President and some of the Bernie Sanders people, who were very vicious with me on Facebook, saying that I’m too old and that I should get out of public life et cetera. That kind of stuff comes with the territory when you are an activist. There was a book by a Chicano author published in the 60s which said ‘once you take the warriors cast you can expect to have arrows shot at you’. So that just comes with the territory, if you’re an activist you can expect to get criticism. When I left my home at Stockton, I was a schoolteacher then I left my job as a teacher to come to work in community organisation for no money – people thought I was crazy, so the backlash comes with part of the territory, it’s something you have to expect and you have to deal with it.

The documentary shows that the women really were on the front lines of United Farm Workers, but did you find that they were initially hesitant to get involved?

The farmworker women are very, very strong, I think women are strong generally speaking. But, and I am speaking of myself also, we have to have the confidence to think that we can also be leaders, because a lot of women were willing to volunteer and do the work that needs to be done but they don’t often do that for positions of leadership and I think that’s something that we have to impress upon women. We also think that we have to be triple qualified or prepared, but I say to the women, just do it the way that guys do it, pretend that you know, and learn on the job. Don’t be afraid of taking those positions of power; I think women can handle positions of power sometimes even better than men because it’s something that we share, and if we don’t share it then we implode. Power is like love, the more we share the more it grows.