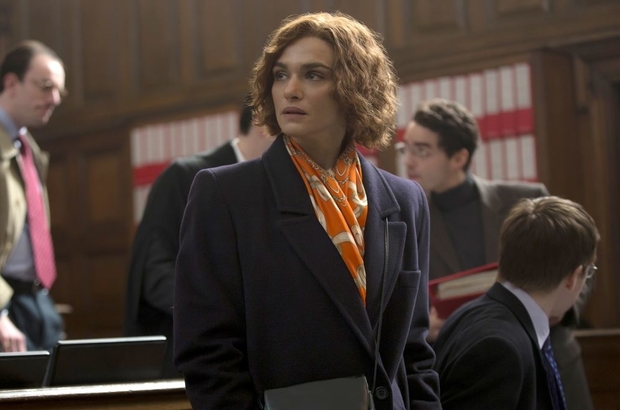 It seems wonderfully prescient that in a climate of rising anti-Semitism and ‘fake news’ in the West, a film about truth and lies seeks to reassure us that the fascists can’t always have their way.

Denial, based on historian Deborah Lipstadt’s book History on Trial: My Day in Court with a Holocaust Denier, is a legal drama about the court case brought by David Irving, a pseudo-military historian, against Ms. Lipstadt, after she accused him of being a Holocaust denier. Even if you have never heard of Irving, the result of the case is, in hindsight, predictable. It would be a miserable film if the verdict went the other way.  Much like incredibly successful series The People v. O. J. Simpson: American Crime Story (2016), director Mick Jackson has to run for his money to make Denial exciting enough to suspend our prior knowledge of Irving’s case.

Timothy Spall’s characterisation of Irving – a toffish, verbally insensitive and menacing (if slightly pantomime) character – is excellent. However, Spall’s performance somewhat panders to the Hollywood stereotype of a British villain, in combining a regal stature with fierce intelligence and a reserved attitude. Having seen Irving give interviews and speeches in the flesh, he is noticeably less cartoonish than Spall’s interpretation, whose version of Irving is somewhat oversimplified. Yet considering how difficult it can be to play an extremely unlikeable individual without falling into this trap, Spall’s Irving is compellingly villainous and multi-faceted.

This trend of awkward, slightly one-dimensional characterisation continues elsewhere. The British are posh, uptight, stiff-upper lipped chaps who like a drink and black pudding. ‘The cast of Masterpiece Theatre,’ says the American Lipstadt (Rachel Weisz) whose Queens accent and forthright disposition are the antithesis of her British legal team. Lipstadt and Richard Rampton QC (Tom Wilkinson) share many tense exchanges over whether to put Holocaust survivors and Lipstadt herself in the witness box. Considering the inherent emotionality of the topic, the debates over the trial’s procedure and evidence collection are handled with the necessary respect. Despite this, David Hare’s story, which relies heavily on verbatim court testimony, is flat. The courtroom scenes are extremely formulaic, lacking great suspense and nuance. Most of the characters, except for Rampton, are staid individuals with no signs of a life outside work. Weisz uses Lipstadt’s thick Queens accent as a proxy to inject life into her character, which ends up doing more harm than good.

Ultimately, the film’s attempt to fast-forward seven years of story into a two-hour film undermines the importance of its subject matter and fails to be effective. There is little space for nuance. If Denial had been a miniseries in the guise of The People v. O. J. Simpson, the internal lives of each major character could have been explored with more complexity and depth; the trial, though a deeply fascinating story, could have been filled with more rousing speeches and confrontations. For a short film, the trial scenes are few and far between, making Denial feel like an episode of Law and Order. In spite of this, there are powerful moments: the court scenes, involving the cross-examining of Irving by Richard Rampton, are a wonderful showcase of intellectual demolition. By exposing Irving’s racist and anti-Semitic views, as well as his selective use of historical detail, Rampton destroys Irving’s reputation as a historian: it is the English court system at its best, and Jackson deftly captures the tension and ensuing satisfaction of this process.

In our brave new world of post-truth, where the internet, which many believed would dampen people’s prejudices, has created echo chambers for humans to air such prejudices, this film has been released at the right moment. Denial has an important story to tell – it should, therefore, be an important film. It is just a shame, then, that Denial is not all that compelling, and does not do its story justice.

‘Denial’ was released in the UK on 27th January.