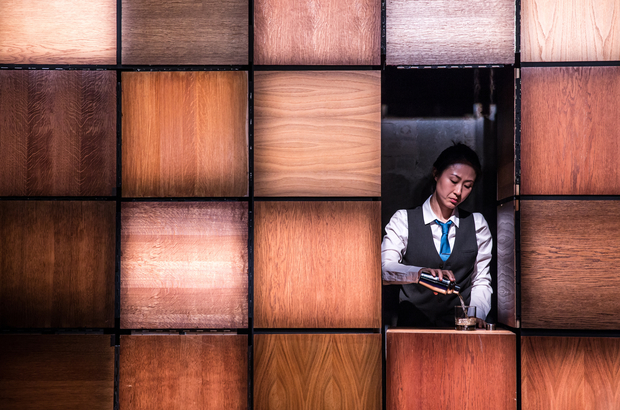 Chinglish, written by David Henry Hwang, is a comedy revolving around the intricacies of doing business in China as a foreigner, inspired by the playwright’s experience of badly translated signs in China. The protagonist, an American businessman named Daniel Cavanaugh, employs a British translator and consultant, Peter Timms, to help him obtain a lucrative commission for the signage of a new arts centre in Guiyang, a city of some four million souls. This somewhat pedestrian premise is then subsequently enhanced with dark intrigue, combining tales of corruption, nepotism, and tangled romance. Interesting differences between the Chinese and Western mindsets are evoked, though rarely explored to a satisfying extent.

The performance in North London’s Park Theatre is intimate and pared-down, which allows the subject matter to shine. The centrepiece of the set is a neat matrix of wooden squares which can be opened and closed at will to turn the stage variously into a Communist Party headquarters, a hotel bedroom, or an upmarket bar. The minister’s dusty People’s Liberation Army uniform makes an appearance in the penultimate scene, an effective device which subtly reminds the audience that the play deals not only with clashes between East and West, but also within a rapidly-changing China. The standout performance is no doubt Candy Ma’s, who plays the vice-minister. Ma expertly portrays a refreshingly complex woman in control of her femininity, adept at manipulating both internal Communist politics and the men around her.

The play functions around the fundamental plot device of miscommunication, creating a continuous air of comedy and allowing audience giggles to be liberally interspersed throughout the two hour runtime. This is a gratifying trait which sometimes helps to disguise the tediousness of the subject matter (a business proposal to manufacture signs, however important to an arts centre, still produces dry discussion about marginal profit rates). Despite the device being effective in periodically producing genuine laughs, the somewhat facile mechanism of mangling particular lines through translation from Chinese to English or vice versa, felt over-worn by the end of the play.

The supertitles that guide viewers through the Chinese-language dialogue ensure that the audience is always in on the joke. Though consistently amusing, the signposting never permits the audience to feel lost and perplexed like the characters on stage are, a missed opportunity for a play which revolves to such a large extent around cultural and linguistic misunderstandings. There are instances, too, of baffling inconsistency, as with the initial inability of Xi Yan, the vice-minister of culture, to hold a very basic conversation in English with Daniel, before in the next scene miraculously improving to the degree that she is able to discuss the meaning of love and the Chinese conception of marriage with him.

The linguistic aspect is, however, only intended to lead on to what the play genuinely intends to explore, the differences between Chinese and Western thought and behaviour. Upon arriving in China, for instance, Peter gives Daniel a lengthy lecture emphasising the nonexistence of the rule of law, the role of which in China is apparently marginal in comparison to what the Chinese call guanxi, or the role of personal relationships and trust in business and governmental affairs.

The significance of guanxi is sufficiently well examined – like an enthusiastic kindergartener, by the end of the first scene, Peter’s sentences are punctuated by Daniel’s excited squeals of ‘guanxi!’, complete with stereotypically brash American gesticulating – but other questions of Chinese culture are teasingly evoked, before being left disappointingly unanswered. Particularly galling is the regional minister’s inebriated confession that he preferred the Cultural Revolution because ‘things were simpler then’, an interesting and no doubt shocking statement to Western audiences. That the American businessman’s backstory of leaving prison to revive the limping family business should merit extensive treatment in the play, while this potentially fascinating point is worthy of only half a line, is disappointing and epitomises the play’s shortcomings.

Chinglish has moments of genuine joy, and the technical achievement of a British actor speaking in what appears to my unqualified ear to be flawless Chinese should not be underestimated. The piece is surely a valuable addition to Hwang’s rich repertoire of plays exploring the cultural gap between East and West, but the play’s extensive focus on its Western characters at the expense of the citizens of the country in which it is set feels like a missed opportunity. Hwang could have used the opportunity to introduce Western audiences to the interesting and altogether greatly under-explored question of the differences between the Chinese and the Western mentality. Chinglish instead is best understood not as a play about China; it is a story about Westerners, set in China.

Featured image courtesy of Richard Davenport for The Other Richard.