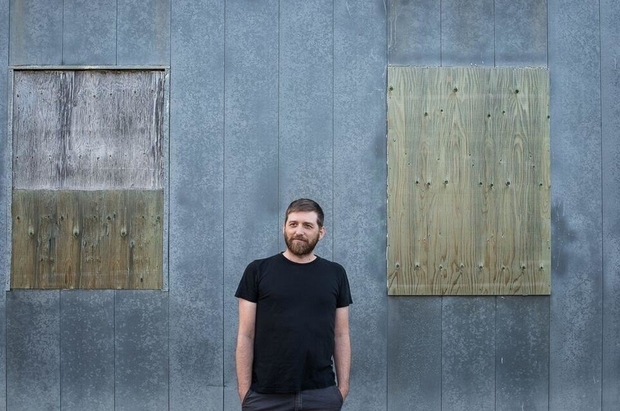 Though I sat inside the attic-like interior of the O2 Academy Islington, during this gig I was transported to Canada by the sounds of John K. Samson and his band.  At first, the audience are softly eased in by Christine Fellows (a folk singer from Winnipeg), crooning mournful ditties about lost youth in a songspeak twang, alone with her ukulele. This poignant introduction attunes the audience the Canadian scene, and Christine moves to the back of the stage, adopting a backing role on vocals and synth.

The venue is subsumed by blue light and Samson strolls on. He has perfected the look of manicured informality: a grey shirt buttoned to the neck and dark jeans, with eerie resemblance to the iconic Simpsons guest star, Hank Scorpio. As the rest of his band form in a crucifix around the stage, Samsons’ guitar begins to stir with a gentle hum, accompanied by a shy back beat into ‘Select All Delete.’ As the song continues in its melancholy fashion, red and yellow lights split and dance across the singer while he apologies for being ‘too loud and indiscreet’. The song eventually slows to sleepwalking pace, luring in the listeners with a comforting lethargy before the drummer suddenly launches in. The sound takes off, with heavier hi-hats on every beat and indulgent fills.  This contrast is typical of Samsons’ undulating songwriting style: he can slip with ease between pining slow numbers  (characteristic of his solo material) and the full throttle romping rock of his indie band The Weakerthans. This track, ‘Sun in an Empty Room’ invigorates the musicians, who grin as they hurtle into a closing instrumental which captures a feeling of musical spontaneity.

Afterwards, as Samson formally introduces his ‘Leftist soft rock band from Canada’, we realize that he sings almost exactly as he talks, with a nasal, audiobook quality. He does not, however, indulge in too much chat and swiftly treats his audience to an evident favourite: ‘Postdoc Blues’. The crowd becomes a choir, sharing the devil-may-care sentiment to not ‘despair, you’ll get it right tomorrow’.  Samson usually ends his songs in one of two ways: sometimes, we feel as though we are running in a dream, as the beat slows imperceptibly and hypnotically (as in ‘Select All Delete’ and ‘Alpha Adept’); often, though, the endings are sudden and unresolved, as in ‘Postdoc Blues’, which signs out on the ambiguous lyric ‘never once bought me a drink’.  Following this, the musicians leave with similar abruptness. The stage is left alone with only marine light and interrupted chords hanging in the air.

Samson re-enters, alone, adopting a new persona as a bard. A standout track is his solo version of The Weakerthans ‘One Great City’, as the singer mumbles about the numbing inanities of parochial life – Samson’s refrain ‘I hate Winnipeg’ is accompanied by a chuckle from the audience. While this is a calming interlude, it is clear he relishes a return to the unbridled cacophony of teenage rock. As his band march back on stage, the vocal submits to the excited instruments they play. The energy that hangs in the air after these rollicking tracks sustains the electricity in the calmer songs.

As ‘Aside’ is played, once again the arena is doused in hot pink, Avril Lavinesque lighting, and crowd hint at – but don’t quite – mosh. Following this chaos, Samson exits on a note of fragility in stark, icy lighting. In amongst a minimal sonic texture, Samson sings of the ‘broken decay’ of his hometown – ‘the car got a list of complaints’ and ‘more faults than the state of California’ – with the reverb on a single line of guitar that sounds almost like a screaming viola. Throughout the gig, Samson skilfully oscillates between resilience and vulnerability, muscle and frailty, strength and weakness. This makes for an emotionally expansive musical experience, of which Samson is entirely in command.

As Samson whispers his last poignant lyric ‘Let it test and be done’, the suspension of geography is relinquished; the magical escape to the intimate Canada vanishes, as Samson walks behind the curtain. Samson’s exit, like his music, is quietly powerful, whispering it’s sentiment rather than screaming it out loud.