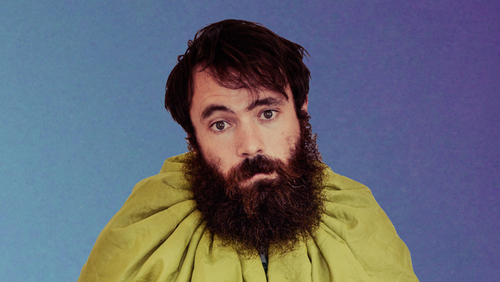 ROSIE NOLAN reviews ‘Before Us’ at Soho Theatre.

Shuffling onstage is the last of her kind: an undisclosed and undiscovered creature on the verge of extinction. Dressed in thick green socks and half a lurid green sleeping bag, Stuart Bowden’s persona presents an account of the way she dies.

Part of Soho Theatre’s ‘Soho Solo’ showcase series of solo performances, Bowden’s one-man show is wonderfully weird and surprisingly uplifting. Combining exaggerated and absurd physical comedy with simple music performed on miniature instruments, ‘Before Us’ is a ‘melan-comic’ demonstration of abject loneliness through the witnessing of the moment of extinction of a species.

To misappropriate a phrase, this is a show of two halves; the first is exposition heavy, setting up the premise of the show and meandering through the neuroses of the protagonist, whereas it is during the second where Bowden’s abilities as a performer really come to the fore. For surreal comedy to work at its best it must seem as off the cuff as possible: the first half an hour of ‘Before Us’ however, is punctuated by asides throughout the retrospective narration which feel overly rehearsed, well written lines fall flat as a result and the tone of the show takes the occasional hit.

This is one of the show’s main points of concern. While technically very good on paper, at times its comedy is so technical that it feels like humour by numbers; his physicality is at times relied upon too heavy-handedly. However, the latter half far excels the former. There is a sort of coda in the show that comes from Bowden climbing through the audience; what was previously a fourth window to be glanced through is destroyed, and the immersion of the audience is immediate. From this point on the show comes into its own, the asides are all but forgotten, and the oft-clunky narration is dropped, allowing the tale is played out in real time.

Bowden is a stronger performer as a musician. It is through his musicality where he provides the funniest, most touching, and most innovative moments of the show, accompanied by his toy keyboard, banjolele, and a loop pedal. The tiny instruments bring a sense of childlike vulnerability to our protagonist. This vulnerability is manipulated by Bowden to illicit the audience to bend to his will; you will, as he requests, hold the hands of those surrounding him, and you will sing along with him.

‘Before Us’ is based loosely on Bowden’s father’s own death, and its aim is to force us to comprehend our own mortality. The final product is a completely unique, venerably daft, but ultimately rather beautiful show; the suggestion that perhaps the “whole world was meant for you” is truly lasting.

‘Before Us’ is part of Soho Solo Season 2015. For more information and tickets please click here.