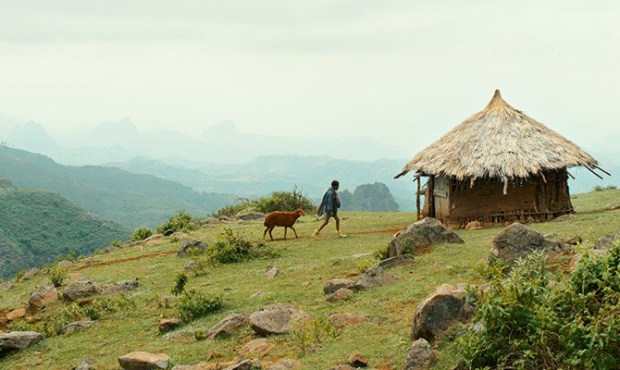 SAVAGE continues its coverage of Film Africa 2015 with THOMAS HETHERINGTON’s rundown of the films from Ethiopia on show at the festival.

I must confess that Ethiopian cinema is virgin territory for me. Until viewing Lamb at this year’s London Film Festival, I had not dipped my toes into the waters of Ethiopian, or even African, filmmaking. Kudos then to Film Africa 2015, for celebrating and championing this cinematic tradition over an eight day festival. The Ethiopia in Transition strand is dedicated to the narratives of this changing nation, exploring this through three incredibly different films. Lamb is the story of one boy and his lamb: a story of nature, childhood and, crucially, growing up. It follows then, that the Price of Love plunges us into the late night city life of taxi drivers and prostitutes, and the need to escape the city and the problems it creates. Red Leaves takes things one step further, tracing the story of a Jewish Ethiopian immigrant living in Israel. All the films deal with people outside of their natural environment, forced to exist in any way they can, or find a way to escape. The characters, and filmmakers, all approach this in fascinatingly diverse ways.

Price of Love is the most Western in tone, with unavoidable echoes of Scorsese’s Taxi Driver ringing throughout. It follows the story of Teddy, a taxi driver, and Fere, the girl he inadvertently helps escape prostitution, and their attempts to create a new life together whilst running from the past. What is most interesting about this film is that, given its subject matter, it never descends into grime or violence. Director Herman Hailay and cinematographer Mulgeta Amaru keep the viewer at a distance. Any violence happens behind closed doors; any sex is blurred in the background. This is not a film about a prostitute and a taxi driver, they are saying, but a film about a woman and a man trying to escape from a life of begging and borrowing. This decision works well and the two able leads (Fereweni Gebregergs and Eskindir Tameru) brilliantly portray the human drama. However, the downside is that the viewer is left to fill in the gaps, leaving the darkness in the film feeling a little toothless. We believe in those running, but not what they’re running from. The scenes depicting the rudiments of the prostitution trade never quite hit home; one has to accept that this is a bad situation, rather than being made to feel it.

The darkness in Red Leaves, however, lies within, and is perfectly incapsulated in Debebe Eshetu’s performance as Meseganio, a man out of time in both senses of the phrase. Set twenty-eight years since his emigration from Ethiopia to Israel, the film follows Meseganio in the wake of his wife’s death. He sells the family apartment and announces, at her wake, that he will be living with each of his children in turn. Unlike Price of Love, Red Leaves explores what happens when the new rejects the old, tracing the irreconcilable rifts between two generations that appear too late to be healed and cause wounds that cannot be salved. Conflict lurks throughout this film; with the blurred soldiers in the background, the warring children at the dinner table and the irreconcilable lovers. It’s no coincidence that Meseganio doesn’t want mobile phones at the dinner table. This technology confuses and terrifies him, as a non-analogue, non-prescribed way of life – but most importantly, it goes against his authority. Whilst occasionally these family conflicts may seem a little hackneyed, the cast carry them through well. The family dynamic is perfectly realised too, and director Bazi Gete places you in their position perfectly. At once the viewer feels frustrated with, scalded by and, most importantly, feels affectionately for this old man in the autumn of his life. The final moments of the film deals perfectly with this nationless figure, bereft of his national and religious identity and Eshetu lays bare this raw, desolated figure.

Lamb takes the viewer back to childhood, and far away from the cities into the mountains of Ethiopia. But tradition still lurks in the background, holding the young protagonist Ephraim from fulfilling his dreams of being a cook. The film, by debut director Yared Zeleke, casts its young hero and his lamb against the beautiful landscape of the Ethiopian mountains. There is a fabulous mix of boy and nature at the heart of this film, and a snatch of the fairy-tale. That being said, this doesn’t mean that everything is sugarcoated: this is a realistic wildlife, and Snow White isn’t there tweeting along with the birds. There’s a conflict, too, between progression and the nature of man; Ephraim wants to be a cook, but tradition dictates otherwise. At times these pulls between opposing forces tug on the viewer’s heartstrings too. Heralded for being “the first Ethiopian director at Cannes”, Zeleke’s real masterstroke in this confident first feature is in his eschewing of nationalistic titles to tell a universal story.

This trio of films all have a conflict at their heart between what has gone before and what is to come. Whether it is a struggle between childhood and adolescence or loneliness and love, these are all films obsessed with moving forward. What is most remarkable is that they all leaving you wondering what will happen after that final cut to black. Lamb and Red Leaves in particular leave an impression of a new life going on after the credits, a transition that will continue to unfold long after you leave the cinema. Real, tangible people; this is the beauty of film, with its ability to convey stories from the other side of the world to a cinema in London. Countries may shift and change, but we will have every moment of this transition through these characters. In the end this strand gives us three very different Ethiopias: what’s magical is that each is just as real as the next.

Film Africa 2015 is running in cinemas across London until 8th November. You can take a look at the programme here.