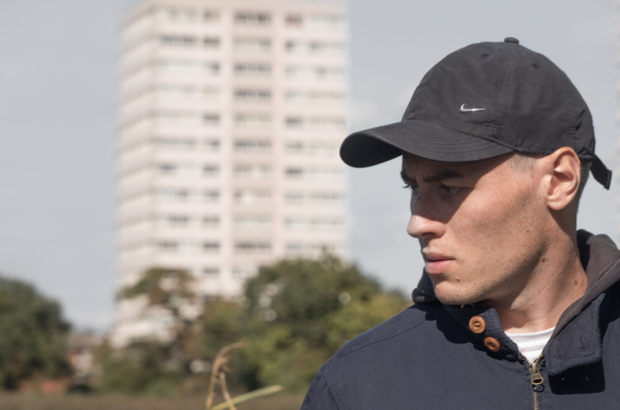 FCUK’D ends up giving far more than one initially expects. This one-man play is delivered entirely in verse by Will Mytum, who plays a teenage boy from a council flat in Hull who, worried that his kid brother, Matty, is to be taken away by the authorities, decides to kidnap him and evade the child protection services. It’s soon revealed that there’s nowhere to go, and he’s fled with a haphazard plan. The show subverts the traditional narrative structure it at first seems to model itself on, and quickly becomes a tale about reliance, narcissism, and identity.

The use of verse is the show’s standout feature, and this rarely feels forced or contrived. The rhyming couplets guide us through the fields and towns of England, supported by Mytum’s expressive delivery, painting a vivid picture without the use of elaborate set design. It’s clear that writer/director Niall Ransome has worked closely with Mytum to ensure that the full meaning is squeezed out of every couplet, resulting in a tight performance that manages to directly communicate the full weight of the older brother’s desperation.

The plot riffs off the familiar ‘run-away’ narrative: the story of a dash for a better life that results in a quick and inevitable burnout. Where this story crops up, it’s done excellently. After leaving home, it’s the frightening forces of the outside world which tell us that our characters are not safe anymore: in Home Alone 2, it’s the vagrants of New York — in FCUK’D, it’s the weather. The rain becomes a barrier between the narrator’s past, and the wistfully dreamt up space in which anything is possible. Yet, soaked, the two brothers realise how unsustainable this mission for freedom is, and they are forced to reflect on their powerlessness.

In the context of this stock model, FCUK’D focuses on the relationship between the brothers. The older weaves a narrative of personal identity: “There’s only so many times you’re called shit, before you start getting to believe it.” His own self-hatred, furthered by his lack of opportunity, contrasts with Matty’s innocence and potential. The narrator latches onto Matty’s intelligence and happiness, and by taking care of something he deems good, he reconsiders the worth of his own life. But this complicates the nature of their relationship: the care that the narrator gives Matty is not quite rooted in a pure love-giving, but is tinged with a kind of narcissism. The older brother is nothing without Matty, to the extent that he doesn’t himself have a name; he needs Matty to justify his existence.

The tale reaches epic proportions as a car is stolen and set alight. Sitting in front of the car’s burned out shell, the older brother has flown too close to the sun, carried away with his dream of freedom. The play’s use of lighting is excellent here – as Mytum’s face is gradually illuminated by the orange glow, the audience sees him reflecting on the scope of his crime for the first time since running away. As the police arrive, the older brother engages with Matty, instead of presuming his willingness to follow. He realises Matty doesn’t want to be there, and he certainly doesn’t need his brother to take care of him. This is where FCUK’D is at its best: not as a tale to romanticise or poeticise the plight of the working man against an oppressive system, or a simple narrative in which the poor man tries to escape his background — but as a tale of co-dependence and delusion. In FCUK’D, nobody is expected to be pitied. We are not compelled to hate the boy here, or the authorities. Though the narrator is clearly a victim of his circumstances, it is equally his own faults that lead to the play’s dark ending.

But despite the build-up with all its moral complexities, FCUK’D’s ending is its low point. In its predictability and simplicity, it comes as anticlimactic. There are few ambiguities or provocations, and it simply acts as the final phase in the tale. This isn’t a problem in itself, but it means that there’s no ‘bang’ at the end of the crescendo; the continual rise in tension only ends with the audience’s applause, and a feeling that the play deserves a more meaningful ending.

In spite of this, though, the play’s exploration of the narrator’s character is incredibly rich and paints a nuanced depiction of desperation and denial. Supported by excellent rhyming couplets, and a powerful performance by Mytum, the play makes full use of its sparse staging to show the dangers of the narrator’s solipsism, and the ultimate greed at the heart of his self-construction as a saviour.