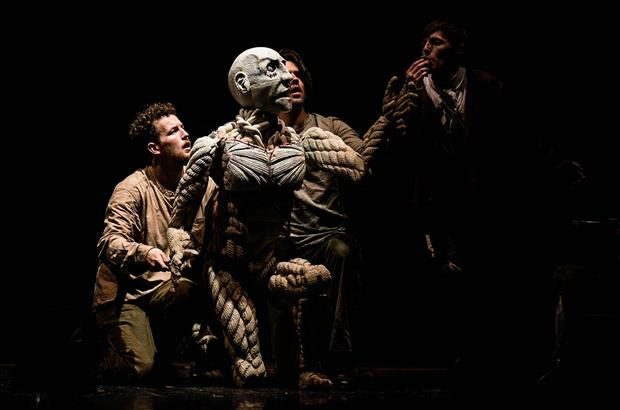 The name ‘Frankenstein’ evokes the image of a heavy browed, green skinned man-like creature with a broad forehead held to his face by screws. In our cultural consciousness, ‘Frankenstein’ is a monster; a living corpse created from stitched up limbs and struck to life by lightning. Those who know Mary Shelley’s story know that the word Frankenstein in fact names the scientist who made this creature. Who is the real monster here? This is the question that Eliot Giurlarocca answers in his chilling take on Shelley’s iconic novel.

The play begins in the Arctic Circle: a ship of explorers is caught in the ice. In a way that recalls Coleridge’s The Ancient Mariner, Captain Walton stands at the helm of his ship, anxious about his crew yet burning to go on. The crew huddle together, murmuring of loyalty to their commander, but a loyalty that is undercut by fear. The set is a bare, geometric structure made from planks nailed together that the cast move through. Initially, it represents the ship, but as the story unfurls, it transforms into Frankenstein’s laboratory, the birthplace of the Creature, as well as its final funeral pyre.

Captain Walton tells us the tale of his trip, a story profoundly affected by another story that he hears: the one told by Victor Frankenstein, after desperately stumbling onto the ship, wracked with an obsession that the audience comes to know well. Within his story is the narrative of his creation. This multi-layered retelling of tales unfolds with a nightmarish tone. We know the horror of the things to come, we just don’t know when.

The tension created at the start holds fast throughout the play. Both Walton and Frankenstein are men who have been pushed to their limits by their desire to pioneer new discoveries. When Walton tells Frankenstein why he has journeyed so far, Frankenstein recognises the same spark that drove him to create the monster. He tells his story as a warning as much as he tells it because he is in need of release. The structure of the play works particularly well in this regard: when we meet the two men, neither of their tales can be fully told. Their stories are yet to be complete, and the play holds the audience on the edge as we are pulled from one memory to the next.

Each performance is strong. The character of Elizabeth, Frankenstein’s ‘more than sister’ has been fleshed out so she is not just a prop to create sorrow. Cowin’s performance evokes sympathy and respect. Gallagher plays a charming Henry Clerval, and both characters’ concern for Victor is genuinely touching. Sean-Cook’s rendering of Captain Walton shows the audience a man on the brink of a discovery, but also on the brink of crisis.

The most powerful performance, however, is given by the Creature. Episodes from the play build up to the Creature’s birth: Victor witnesses the power of lightning, his interest in occult science, his frenzied collection of limbs, organs, tissue and muscle. From the beginning, he is scared of the passion that drives him. The parts of the Creature are symbolised through frayed ropes, dirty rags and burlap sacks. Victor later laments about how each limb was ‘beautiful’, but the well-worn and grimy props forebode the grotesque result of the experiment.

The Creature emerges from pieces of the set that had made up the ship, like Frankenstein’s story emerges through Walton’s retelling. Frankenstein whispers in disbelief ‘it is alive’. The quietness of this crucial point is a relief from the otherwise frenetic dialogue of the play. While other characters have lines, the first half seemed almost a monologue from Frankenstein, albeit a brilliant one, performed by Ben Warwick. He is constantly talking, explaining to Walton, Elizabeth, the audience, to anyone who will listen, his obsessions and guilt.

The Creature is an ingeniously designed, life-size puppet. It is a corpse with no skin, each muscle and sinew and stitch brought into focus. The design is chilling rather than sensational. Controlled by three people, it moves with an utterly life-like fluidity. Labovitch gives the Creature its rasping, pained voice, while the other two actors create a wounded and near-constant breathing sound.

Giurlarocca’s “monster” is never given a name, which allows the audience to decide what identity to give Frankenstein’s creation. At first, this is shaped by Frankenstein’s narrative, as Warwick embodies as man filled with disgust. But then a turning point comes in the performance, and this is when the Creature demands that we hear his story. ‘Did I request thee maker, from my clay, to mould me?’ he asks. This quote, from Milton’s Paradise Lost, is what shifts the responsibility from the Creature to Frankenstein himself .

The Creature is ‘othered’ by his appearance rather than his character. This element seems particularly topical in the current political climate. Why do we ‘other’ people? How do we judge? What drives them to extremes? Giurlarocca frames the condemnation of the Creature in a way that invites us to reflect on the part we play in creating hate. The two characters that denounce the Creature – Frankenstein and Walton – are both blinded by his sense of moral righteousness. The effect of the production is a chilling one: is judgement ever so easy to bestow?