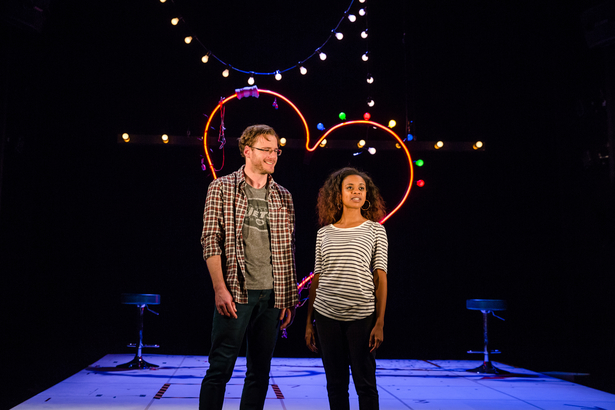 Richard Marsh and Katie Bonna’s ‘Dirty Great Love Story’ has been rightly lauded by many as a touching and hysterical comedy. With some novel approaches and an easily relatable theme of the messiness of love, the production does fall back on some clichéd romantic tropes which at times hold it back. Nonetheless, Felix Scott as Richard Marsh and Ayesha Antoine as Katie Bonna are superb, conveying the emotions of their characters with fantastic and – as in all good love stories  – cripplingly embarrassing aplomb. The secondary characters, Katie’s dreadful pompous boyfriend and gauche best friend, also played by Scott and Antoine, add a delightful splash of colour and playfulness to the main story, and frequently provide the play’s comedy around the central characters. The two actors carry out the transitions between their different parts brilliantly, and the constant rapid switching, combined with the rhyming verse the play is partly delivered in, often produces a witty and wonderful charm.

Sadly, the central theme of the play, consistently and wonderfully maintained – that love is often messy, miscommunicated, drunken and downright dirty – was not enough to distract from the play’s reliance on a customary rom-com plotline. They meet, they have a moment together, then they don’t like each other, then they do – a standard narrative that does little to break from the norm of rom-com storytelling. Although Scott and Antoine vividly bring to life the settings of the story with little more than a (very clever) supporting audio track and their own physicality, the play’s changing settings didn’t seem to do much more than provide a sequence of arenas for the main pair to awkwardly and familiarly interact on their path toward their dirty and identifiable romance. 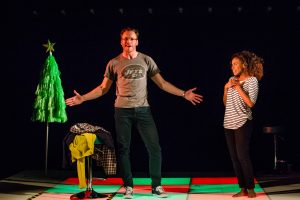 Despite this, the relatability the play clearly strives for is pulled off fantastically: Katie and Richard are the everyman and everywoman of a realistic and tender love that we can all see in ourselves. The story draws heavily upon the recognisable style of the romantic film less clearly than the theatrical medium it exists within, making it just different enough and presented skilfully enough for its warmth to shine through. In a time when film romances can be as unpredictable as this year’s La La Land, as complexly characterising as 2012’s Silver Linings Playbook, or with such innately humorous a setting as 2008’s Forgetting Sarah Marshall – in which the title is immediately upended when the ex-lover books a holiday in the same Caribbean hotel as his ex-beloved – it is a pity that such acting and writing talent did not do just a little more to twist the conventions and break from the worn comfort-zone of romantic comedy.

‘Dirty Great Love Story’ will certainly provide a more than hearty laugh, but seeing yet another predictable love story does raise some familiar questions about the rom-com genre in general. According to Shane Snow from maneatingrobot.com, Hollywood produced 36 sequels last year, more than ever before and following a regular pattern of growth that has continued since the uncertainty following the 2008 financial crisis. The reason for this is simple: although sequels tend to produce less profit than a ‘successful’ original movie, they almost always produce more than the average film. 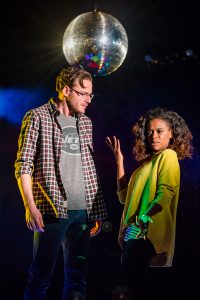 For romantic comedy, apart from a few notable exceptions such as 2001’s Bridget Jones’s Diary – which, focused on only one side of the love story, allowed development of her story and love lives beyond the original – sequels are extremely difficult for the genre to handle without ruining the ‘happily ever after’ we desire from this type of entertainment. The whole genre of romantic comedy can sometimes seem to be emotionally following this economic law of movie sequels, although the tale is tired, we still want more of the same timeless story we fell in love with. We want the same story that we can see in ourselves every time we laugh and fall in love. Although the names of the characters must change to avoid ruining our rosy memories of great passions past, the story stays the same because it is one we love.

This love story is certainly dirty, astute, and more than a little funny, its actors carrying the performance with wonderful finesse from start to finish. It is charming and clever, and in this it unquestionably respects and capitalises on its theatrical climate. Nevertheless, it would be nice to have seen something as unexpected as this was endearing, or something as unusual as this was witty. It is certainly worth going to see for rom-com fans, though it may in time run the risk of being as hazy a recollection as a drunken one-night stand, rather than the enlightening memory of a real love lost.